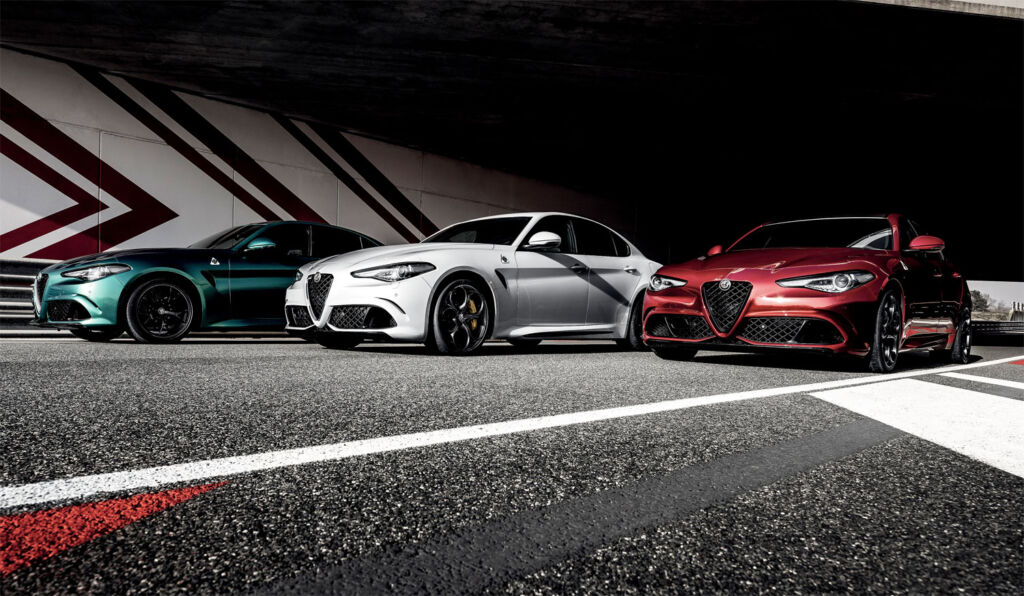 The choice of exterior paint colours on the configurator for this model also features Alfa Red as the only no-cost option. In addition, there’s two ‘Tri-coats’, including the striking Competizione Red (£2,500 for the privilege) chosen for our test car, as well as five metallic shades.

At the back of the Giulia Quadrifoglio, you’re immediately drawn to the quadruple helping of tailpipes, otherwise known as a dual-mode quad exhaust system. This is because two sit either side of the black racing car-like diffuser under the boot lid that’s furnished with a subtle thin carbon fibre spoiler.

The MY20 blurb explains that customers can also fit a titanium exhaust with carbon-fibre tips from the Slovenian manufacturer Akrapovič, for a more ‘sophisticated’ sound, which may translate as a more refined version of the raw notes that currently emanate from the rear. The updated Quadrifoglio also comes with darkened rear LED light clusters, whilst the Giulia badge sports a glossy black finish.

Interestingly enough, there’s no ‘Quadrifoglio’ wording on the back (like you would get on an AMG model), as it’s left to the iconic aforementioned four-leaf clover motif to do the talking. 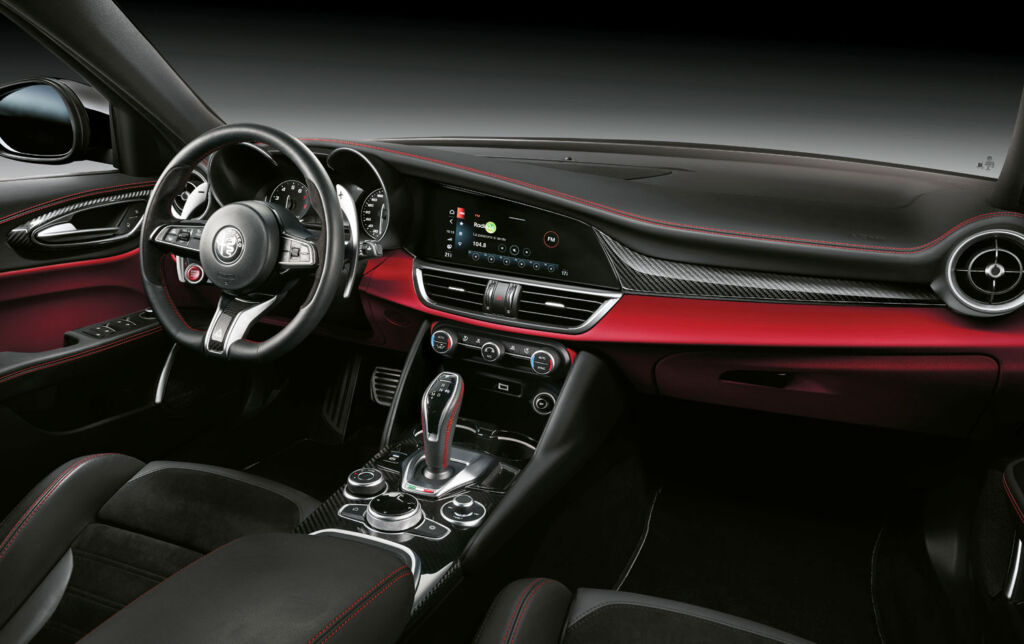 On the inside
As you would expect, the Giulia Quadrifoglio has a sporty and comfortable interior, and the electronically-adjustable and ribbed seats are furnished with smooth grey Alcantara and leather. There’s a nice wave-like profile over the top of the dash with red stitching plus a re-designed centre console, which houses two deep cup holders, the gear shifter, the driving mode selector and the controls for the infotainment system that’s displayed on the 8.8-inch screen, which also doubles up as the reversing camera. 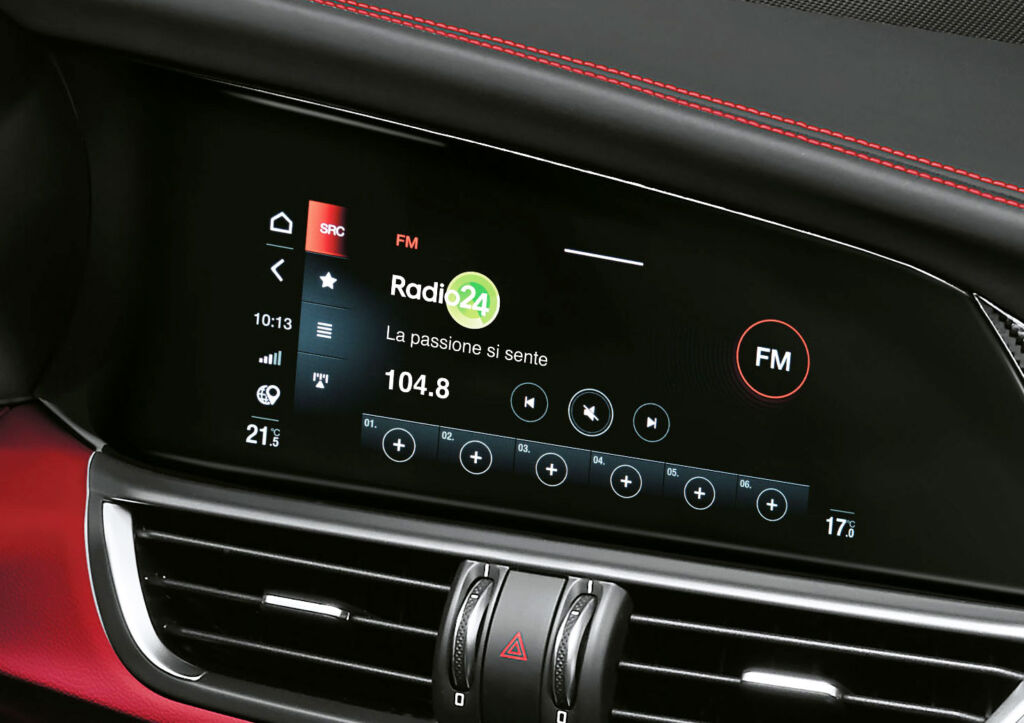 The entertainment interfaces aren’t that sophisticated, but then again, “Alfaficionados”, if there is such a thing, won’t really be buying this car to listen to the radio, or to an MP3, as the Quadrifoglio’s soundtrack takes precedence over anything else.

When you settle into this car, it’s a nice driving position, with plenty of head and legroom. Synonymous with a race car, hitting the red button on the Quadrifoglio’s leather flat-bottomed sports steering kicks the car into life, and there are also other controls that are easily accessible, such as for the cruise control, the volume level for the in-car entertainment, and for taking hands-free calls whilst on the move.

There’s plenty of storage throughout the cabin, including under the central armrest, which is big enough to hold a phone (there’s a USB socket), some cables and a few other odds and ends. At 480 litres, boot space is very impressive, and will easily accommodate a few sets of golf clubs plus any other equipment.

What’s the Alfa Romeo Giulia Quadrifoglio like to drive?
It’s blisteringly quick, and with supercar performance on-tap, there’s a strong temptation to eke out every last bit of power from the V6 block, which was supposedly developed with the help of Ferrari. In fact, you have to be very controlled, in a frustrating kind of way, and to not apply too much pressure on the throttle. This is because the speedo will hit 62 mph in just 3.9 seconds (just very slightly slower than the far lighter Lotus Elise Cup 250). 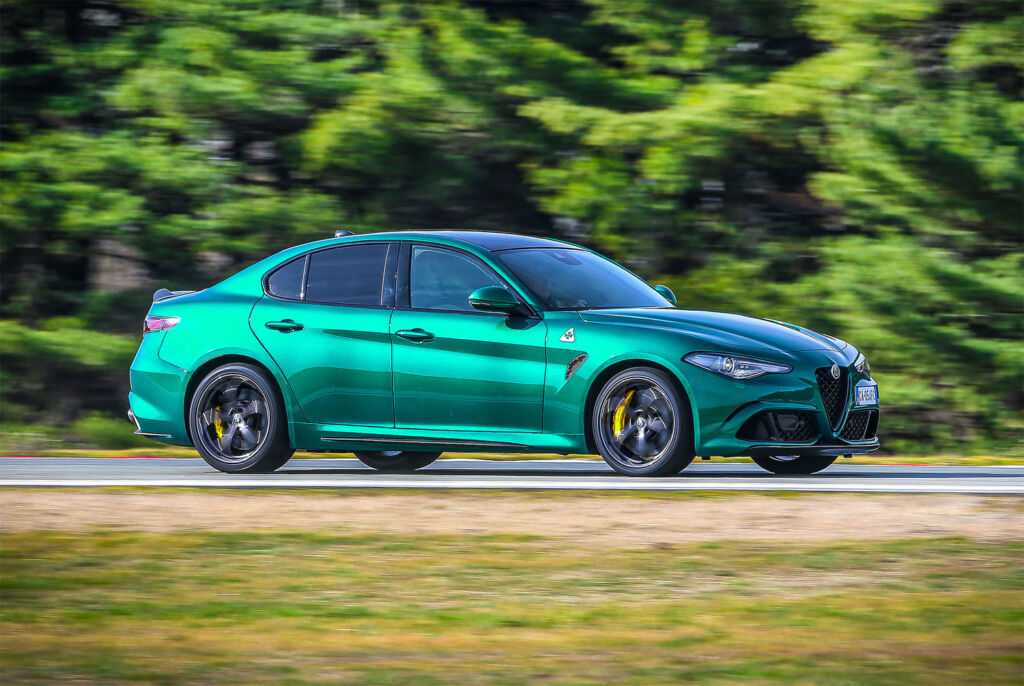 With so much power on tap means that, if you put your foot down with too much gusto, you will be thrown back into your seat and, any passengers will also not be devoid of this sensation.

The eight-speed box is smooth and responsive and, popping it into Race mode means that the gear changes can be achieved in just 150 milliseconds. There’s no traditional manual option available with the Giulia Quadrifoglio, but you can change gears using the aluminium paddle shifters situated behind the steering wheel. 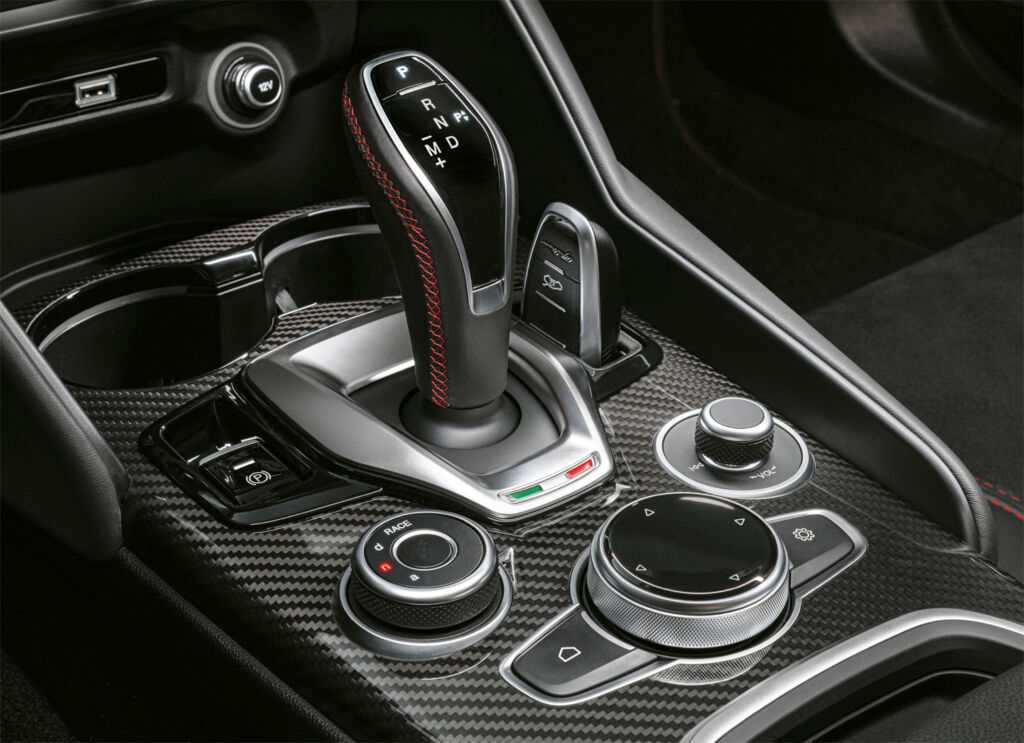 In fact, within the legal parameters of today’s roads, there’s absolutely no way of finding out, or appreciating for that matter, what this car is really capable of, as it’s just that fast. If you took it on the track and put your foot to the floor on an old runway, for example, this variant of the Giulia can top out at a staggering 191 mph, about the same maximum speed quoted for a Porsche Panamera Turbo or Maserati Quattroporte V8 GTS.