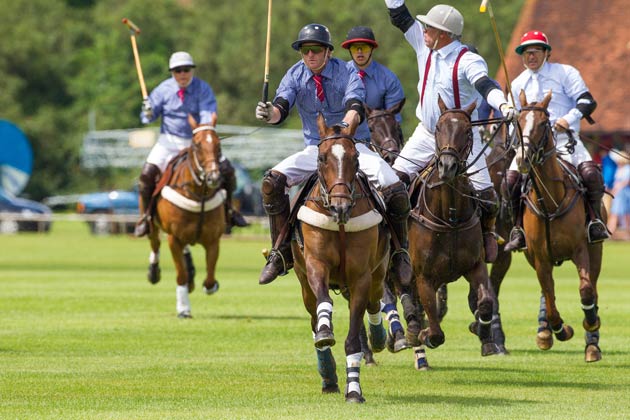 The Photographs accompanying this article are Copyright © 2012 Harald Joergens – https://www.haraldjoergens.com/

Despite Polo not being an Olympic sport since 1936, at Hurtwood Park Polo Club, the Olympic spirit touched upon the game once more with Bradley Wiggins, Olympic Gold Medalist presenting the Cup to Silver Fox USA Polo Team. Heritage Polo is an impressive and exciting revival of Polo in the 1900s, as played by British Empire Army Officer Cadets at the Royal Military Academy Sandhurst in 1885, and Ladies in the United States of America in 1912.

Polo History is brought back to life in a fresh concept with a weekend fixture of four teams performing in ‘Old English Wear’ dress code. Gentlemen compete for the Heritage Polo Cup and play in white jodhpurs, shirt & tie provided by TM Lewin.

Hurtwood Park Polo Club Member and Polo Patron Park Bradley (-1) from America, was over the moon with his Polo Team playing at top of the game. The sight of Wiggins holding the Cup aloft, defined yet another spectacular sporting moment adding to the incredible Olympic fortnight we are having in Surrey.

‘This year we focused on the Olympic Spirit and the Polo Team of the Ladies of the British Empire” says Zingg “Liberty Freedom developed a specific fabric with the Union Jack pattern and we thought that would just be the perfect outfit for this occasion – what a joy to see them holding the Ladies Crystal Cup high.”

The event was once again a resounding success, and we look forward to the 8th Heritage Polo Cup in 2013.

Around 500,000 UK Adults Might Not Have Antibodies and Could Still be at Risk