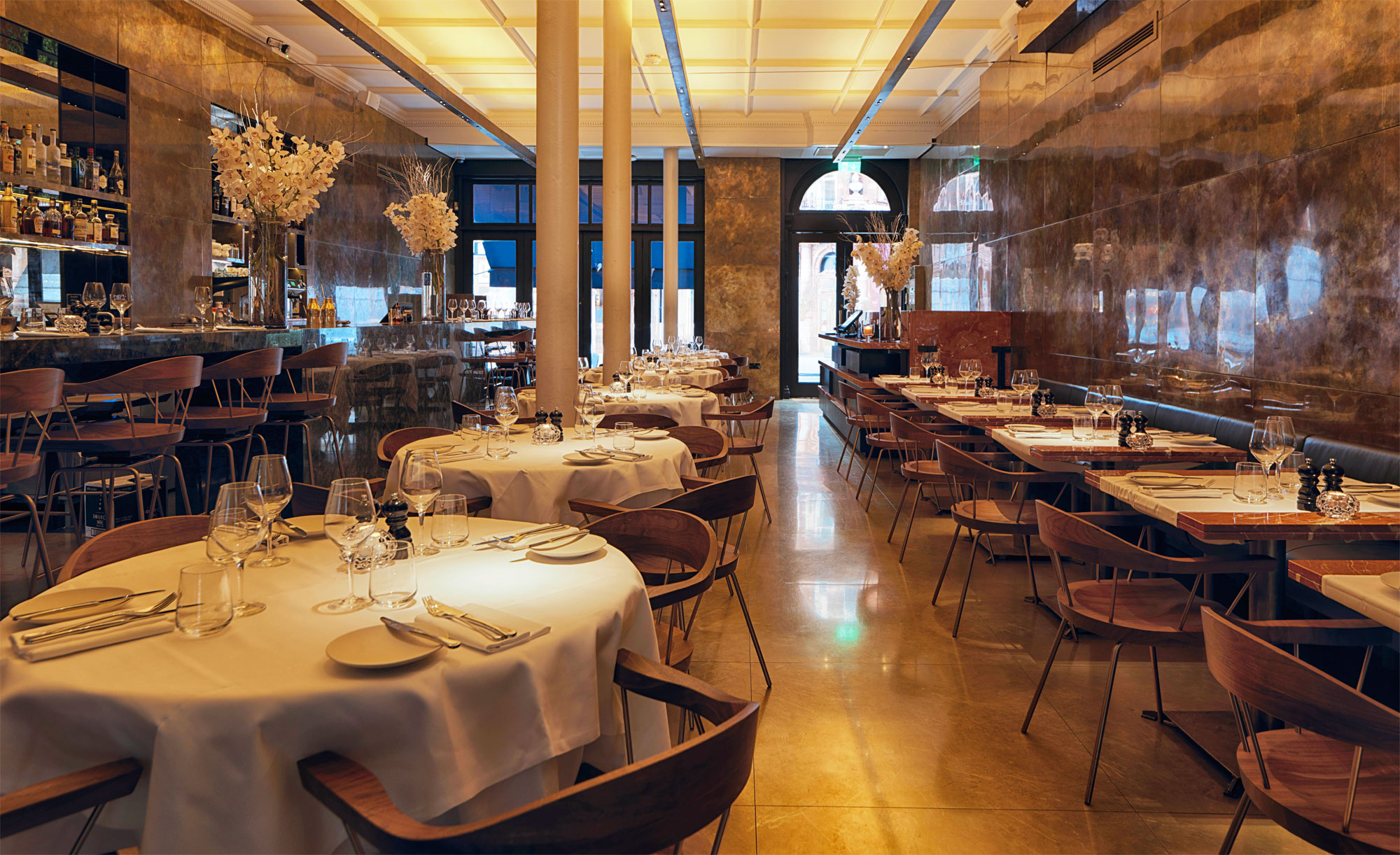 8 Mount Street officially opened its doors to guests only two months ago and sits on one of Mayfair’s most prestigious thoroughfares.

A London W1 address which was formerly known as ‘Le Chabanais’, the restaurant is surrounded by a plethora of luxury brands such as Porsche and Carolina Herrera, and offers today’s diners Mediterranean-inspired cuisine courtesy of a team led by Executive Chef Adrian Mellor.

Featuring a warm brass décor, metal flooring and a 30-foot long Italian marble bar dining counter, the interior has been designed by Clément Blanchet, the man behind the Serpentine Gallery Pavilion, and seats 78 visitors at a time. 8 Mount Street is open from noon until 3.30pm, and then again in the evening for dinner from 6 to 10.30pm Monday to Saturday. New for a Sunday is brunch (served between 11.30am to 3.30pm), where delicacies such as home-cured bresaola, celeriac remoulade and pickles, as well as lobster omelette and truffled scrambled duck eggs, can be savoured. 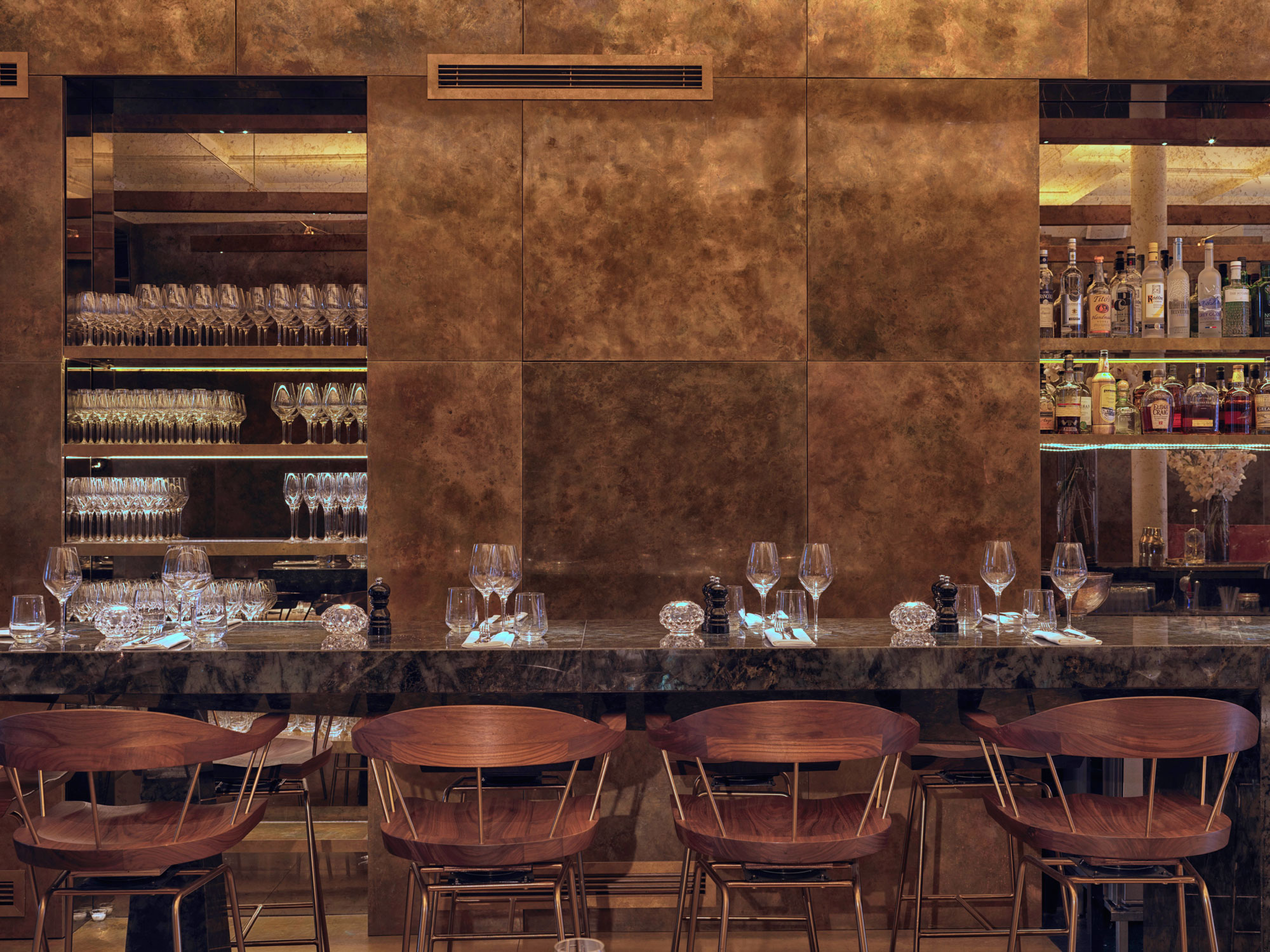 Before sitting down for dinner, we were invited to descend into Bar 8 on the lower ground floor, a dark, atmospheric and intimate space hidden away from prying eyes. At the helm is the very knowledgeable and charismatic Bar Manager, Kevin Knee, who brought his experience across from Gordon Ramsay’s Maze restaurant on the nearby Grosvenor Square, after working there for four and a half years. There are only a few delicious homemade concoctions to choose from, but if you want to venture ‘off-menu’ and have one of your favourite tipples instead, Kevin and his colleagues will be more than happy to oblige, as long as they have the ingredients to hand.

After being promised that it tasted just like Terry’s Chocolate Orange, I sampled the aptly titled ‘Terry-fic’, made of Cointreau, Grand Marnier and Lindt excellence dark chocolate. It was superb and far too easy to drink, and it was actually a good thing that we needed to retire for the evening meal, because otherwise I think it would have proved difficult to master the staircase on our departure. Designed specifically for this year’s Valentine’s Day, my guest tried the romantically labelled ‘Amore’, made from Sipsmith gin, pink grapefruit and in-house pomegranate syrup, a beverage finished with a dash of champagne and a floating frozen heart made from cranberry juice. It also disappeared with very little hesitation, and so did the moreish popcorn which was subtly infused with eight different spices. 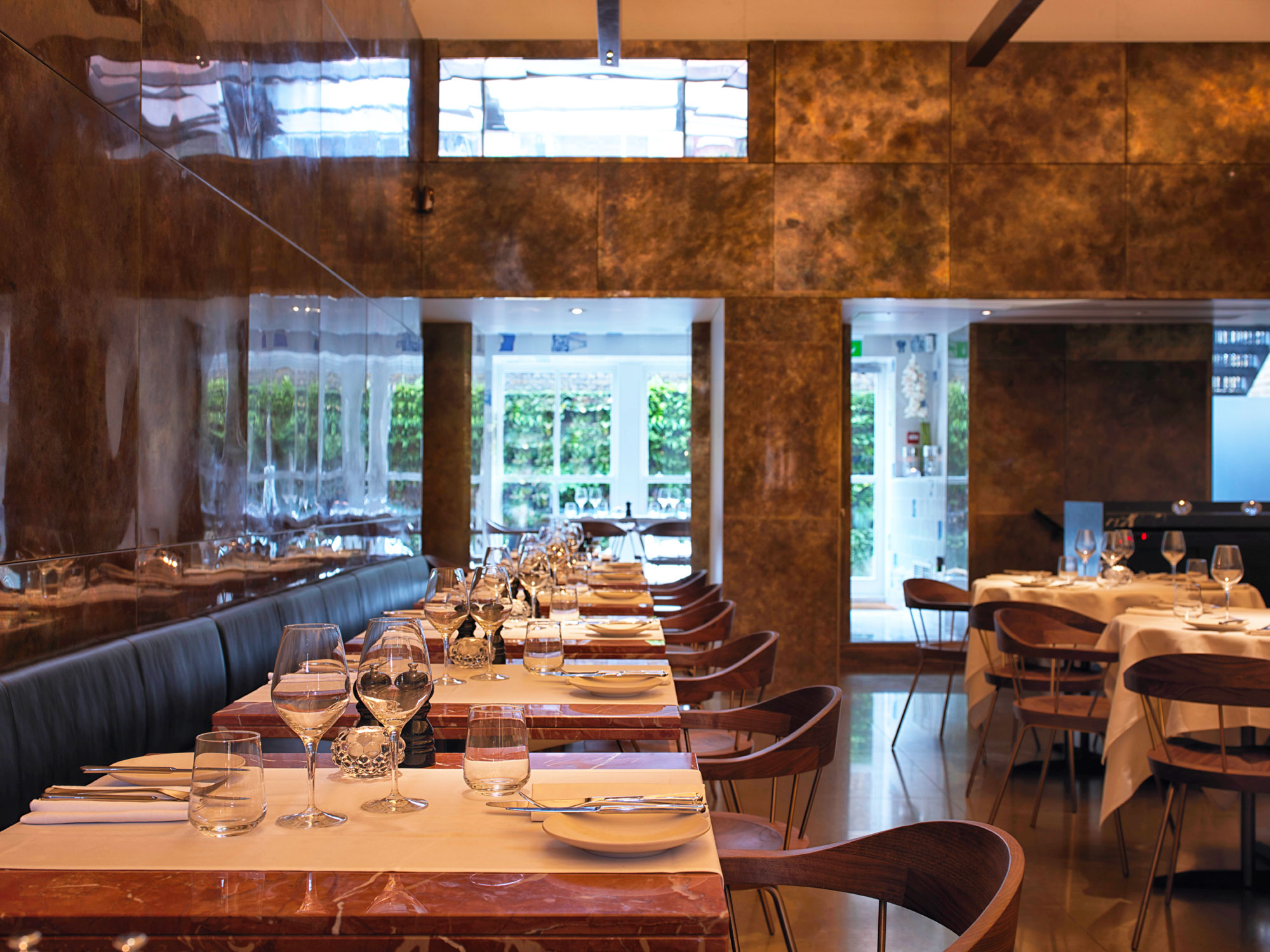 Re-emerging on street level, we planted ourselves on the tastefully curved wooden chairs, and for dinner, there is the option of going à la carte or with the set menu for £35 per person, which is extremely reasonable considering the location. We opted for the former, and whilst we were deliberating as to what to have, we were treated to some warm and crusty white sourdough and olive bread with butter, olive oil and balsamic vinegar. For the starters, there is everything from pecorino crème brûlée and pan fried foie gras to beetroot and goats cheese salad, so it really is hard to choose. I settled on the uber-creamy Burrata which was topped with sliced Datterini tomatoes and covered in a sweet dressing of basil, lemon and honey which completed this dish beautifully. 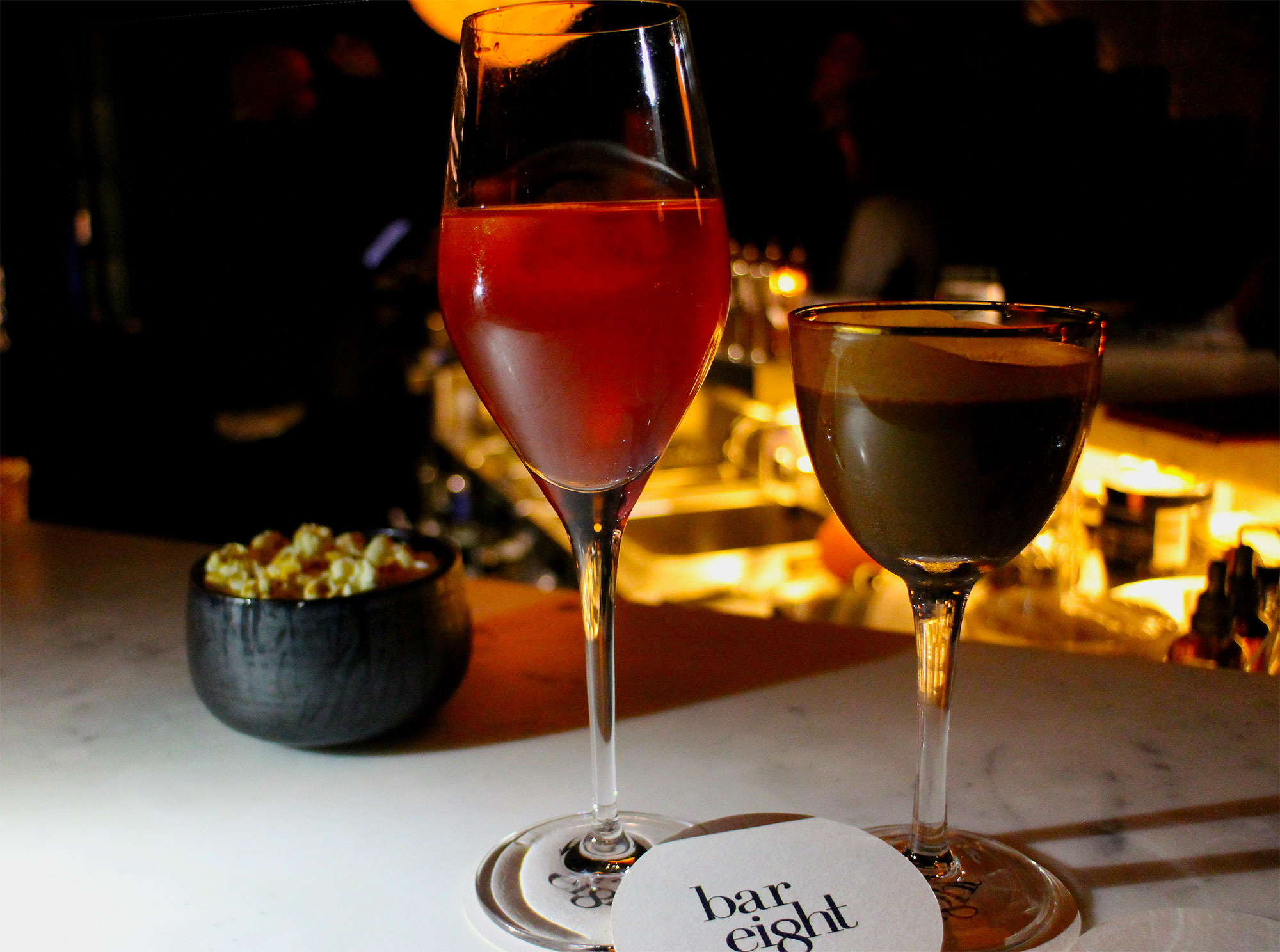 The main courses at 8 Mount Street were another tough decision and there are plenty of meat and fish delicacies to get the mouth watering. A long-term personal favourite, I settled on the Dover Sole with a brown butter sauce and peppery chive garnish which really brought out the flavour of the moist fish. This was joined by a side of Gratin potatoes which were adequately filling. My dining partner worked her way through the rack of lamb, which consisted of three pieces of tender and flavoursome meat, each cooked for different lengths of time. What’s more, they were artistically perched on a bed of mixed olives, smoked aubergine, sage and sundried tomato. Both were impressive dishes which we thoroughly enjoyed.

With just about enough room left for the sweets, I was heading for the profiteroles with chocolate sauce, but after some gentle persuasion from our host, it was ‘Apple Apple Apple’ that finally won me over. This translated as a trio of different deserts carefully arranged on a rectangular plate, starting with tarte tatin on the left, followed by mousse in the centre, and finishing with a crumble. It was a joy for the senses, and there was nothing not to like. My guest, on the other hand, rounded off her meal with a refreshing array of different flavoured sorbets, namely cherry, raspberry and lemon. 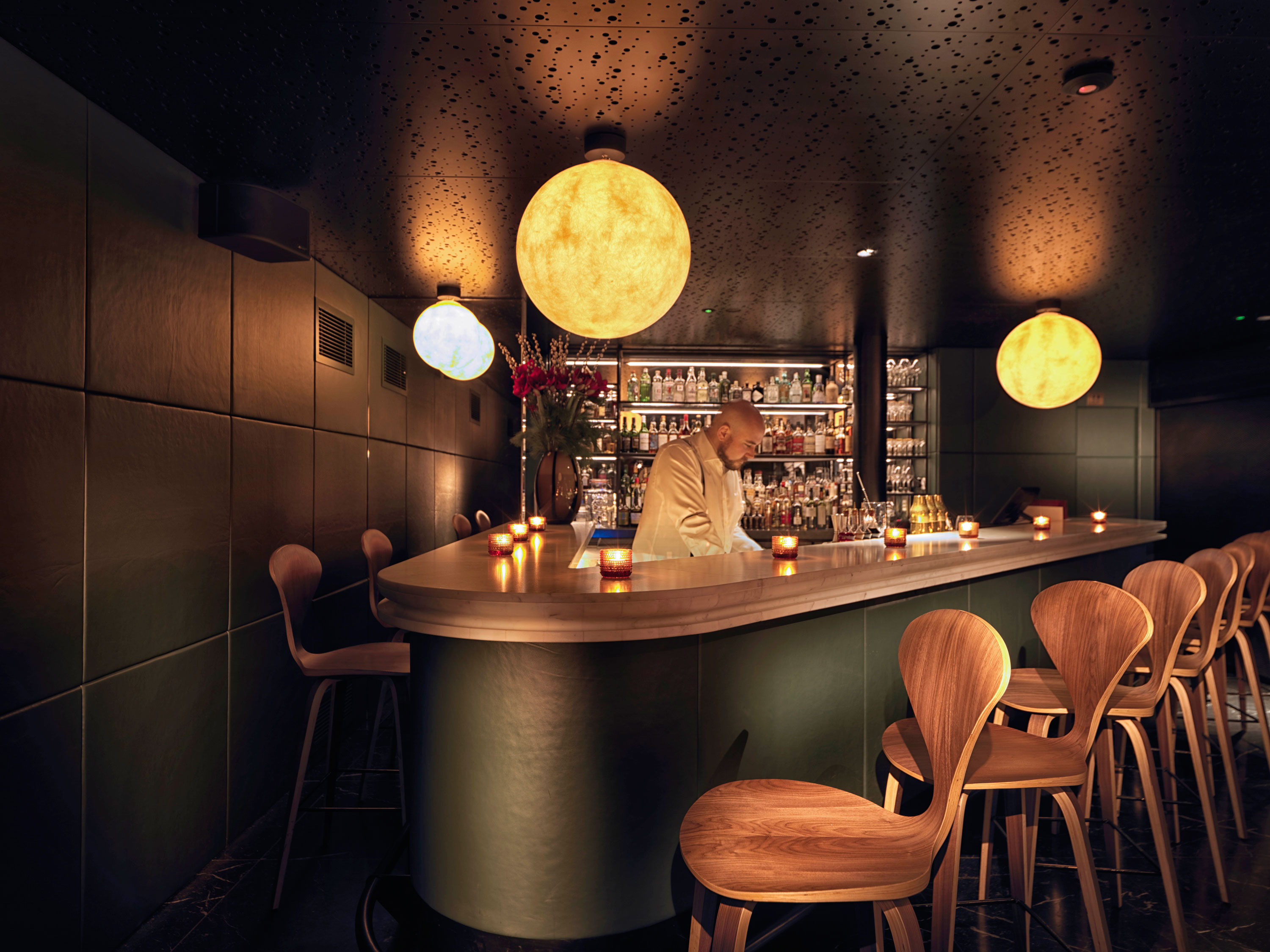 Wine connoisseurs will be pleased to know, that at 8 Mount Street, there is a comprehensive list of varieties available spanning a Côtes du Rhône Blanc by the glass to a more pricey £3,200 Bordeaux for those feeling a little flush.

8 Mount Street is an establishment which delivers excellent service, as well as a very high standard of gastronomy and beverages. In other words, it literally has all the right ingredients for a very successful future, and we will certainly be returning next time we are in Mayfair.

8 Mount Street – Where and How?