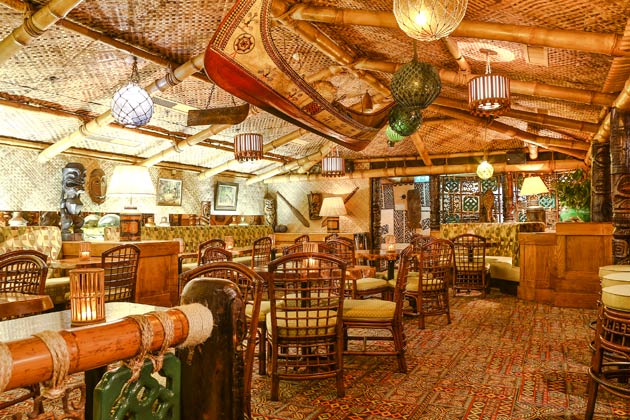 Located on the lower floors of the Hilton Park Lane Hotel in London, Trader Vic’s opened its doors in 1963 and remains one of London’s favourite Mayfair restaurants and bars.

Frequented by celebrities such as Charlie Chaplin and Elton John, it recently underwent a huge refurbishment and its south pacific inspired décor takes inspiration from island sunsets and lush foliage. Thick bamboo poles as well as traditional outrigger canoes line the roof of this venue to help give this eatery its distinct ambiance. 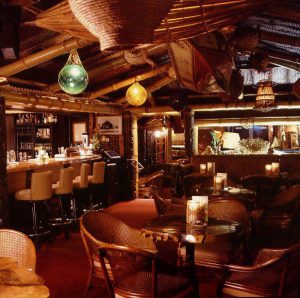 Trader Vic’s is divided into two areas: one is the bar boasting a 200-strong cocktail menu (ranging from hot toddies to stronger varieties) and the other is the adjacent restaurant serving Polynesian cuisine with a French and Asian influence. Cocktails, and especially rum, are significant as this bar is home to one of the world’s most famous drinks by the name of ‘Mai Tai’. It was concocted in 1944 by Trader Vic’s who served it to a customer, and upon tasting it, he said “Mai Tai Roa Ae” in Tahitian, which translates as “Out of this World”.

For something a little different, we sampled two non-alcoholic delicacies before dinner. I had the very refreshing ‘Puerto Principe’, the equivalent of a Piña Colada, which was served in a chilled porcelain coconut shell and decorated with a piece of pineapple and glace cherry. My partner opted for the pink and thick ‘Mariana’s Fresh Fruit Punch’, made from a blended medley of fresh fruit, namely strawberries, banana and apple. With contemporary music playing in the background and chilli infused popcorn to nibble on, all that leaves you to do is to sit back and relax. Moorish bar snacks are also available for those feeling a little more peckish.

After enjoying the pre-meal beverages, the waiters and waitresses, who wear brightly coloured clothing to fit in with the South Pacific theme, guided us to our table in the main restaurant area which is suitably furnished with wooden furniture and red banquettes. The menu on offer is unique in the fact that it offers dishes made in world famous Chinese wood ovens, technology which dates back to the Han Dynasty in 206 BC. The ‘Specials’ change on a weekly basis, and when we went, these included tuna steak grilled with sesame seeds, red peppercorns and chive oil on a bed of pak choi.

From the ‘Bites’ section of the menu, Trader Vic’s signature finger food, my guest tried the very tasty crispy spring rolls which were filled with a host of different shredded vegetables such as mange tout, bean sprouts and water chestnuts. I sampled the equally wholesome grilled courgette and goats cheese salad which was complemented beautifully by a pink raspberry vinaigrette. Come the main course, and I tried one of the ‘Trader Vic’s Favourites’ in the form of the Dover Sole Meunière, succulent white fish dressed with baby capers, lemon and nut brown butter. There are other sides on offer such as French fries and pak choi, but the soft parsley potatoes were more than sufficient to satisfy my appetite.

Following the recommendation from our host Andrea, my companion opted for the Indonesian rack of lamb from the wood-fired oven which arrived on a wooden board alongside Singapore noodles and half a peach decorated with mango chutney. Both of our selections were impeccably cooked and glided through our mouths with ease. For dessert, there is a choice of five different options, and what caught our eyes were the Chocolate Praline Parfait, which featured a chocolate mousse-like consistency with a raspberry oozing out of the centre, and the BBQ Pineapple. The latter came with a fruit base on which sat a ball of coconut ice cream garnished with finely cut pieces of chilli, dried coconut and two pineapple leaves. The chefs had truly done themselves proud and we were not left disappointed during the final course. To cleanse our palates before leaving this colourful venue, we ended the meal with a pot of gunpowder green tea with Moroccan mint.

If you are looking to dine in exotic and flamboyant surroundings and are after a combination of some of the finest food and cocktails in London, then look no further than Trader Vic’s.

To make a reservation, visit www.tradervicslondon.com

Click below to view Trader Vic’s in more detail