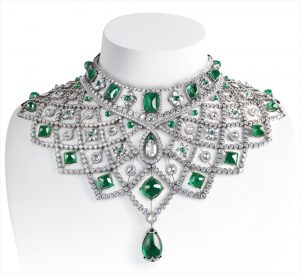 This spectacular creation, a modern masterpiece, is a regal reworking of an early Fabergé jewel, recreated and contemporised from an archival gouache design dated 1885. The necklace, striking in its timeless elegance, was conceived by Fabergé’s in-house design team in collaboration with a leading Parisian high-jewellery workshop. The complex and challenging design process took two months, followed by 14 months of intense and meticulous hand workmanship by some of the world’s finest artisans, goldsmiths and gem-setters. The breath-taking composition was conjured from a dramatic collection of 79 emeralds of exceptional quality, totalling 186.85 carats, featuring specially-cut sugar-loaf cabochons and a single pear-shaped drop of 30.65 carats. The emeralds, ethical and ecologically sound, were sourced directly from Gemfields’ Zambian mines and hand selected one by one, in the rough, at auctions over a period of a year, by Fabergé’s Creative Director, Katharina Flohr, who ensured that the emeralds were perfectly matched in colour and character. Each rough emerald was then cut to the very particular specifications of the design.

Superbly crafted in white gold, the Romanov necklace is ingeniously articulated to spread over the shoulder and neckline in a silky openwork trellis of sumptuous emeralds and white round diamonds and rose diamonds, shimmering with a soft, vintage lustre. In all, the necklace is set with 2225 gemstones, totalling 363.48 carats, including 1991 round white diamonds, totalling 98.15 carats, 151 rose cut diamonds, totalling 43.29 carats, with one rose diamond of 0.67 carats and a pear-shaped rose cut of 3.48 carats.

The high drama of the Romanov necklace with its spectacular lace-like collar is complemented by a very modern versatility: the necklace has been impeccably constructed in three separate parts and can be transformed and worn in several different ways. The stunning choker detaches from the collar, allowing the two necklaces to be worn separately, while the choker can be worn alone or with the emerald drop pendant.

The ravishing Romanov emerald and diamond necklace evokes the unrivalled bejewelled splendour of the Romanovs, embodies the artistry and craftsmanship associated with the legendary name of Fabergé and at the same time perfectly expresses the essence of today’s powerful femininity.

Romanov Emeralds
The Russian Imperial State jewels comprised the most important collection of jewellery in the world. Peter the Great (1672-1725), responsible for the Europeanization and modernisation of Russia, began the acquisition of the magnificent jewels that would come to be associated with Romanov lifestyle. Catherine the Great (1729-96), who became the most powerful monarch in Europe, perpetuated this splendour, so much so that her reign was known as the Diamond Age. A great patron of the arts and discerning collector who built the Hermitage to house her collection, she was a lover and connoisseur of jewels and gems, and it was during her reign that the fabulously rich mineral resources of the Ural Mountains, in the far east of the country, began to be thoroughly explored. Amongst the gemstone treasures of the Ural Mountains were magnificent emeralds which became an essential element of Romanov bejewelled splendour. Perhaps the most famous and most sumptuous Romanov emeralds belonged to the jewel-adoring Grand Duchess Vladimirovna, sister in law to Tsar Alexander III, and aunt to Nicholas II. A larger-than-life character, she was a great gem connoisseur and collector, with a particular penchant for emeralds. As Princess Marie of Mecklenberg-Schwerin, she had received a spectacular parure of emeralds and diamonds as a wedding present on the occasion of her marriage to Grand Duke Vladimir in 1874. The parure included a celebrated necklace of hexagonal cut emeralds framed in a double row of diamonds, the central emerald weighing 100 carats, as well as a brooch set with a rectangular cut emerald of 107.72 carats, said to have belonged to Catherine the Great. Her legendary jewels were smuggled out of Russia at the time of the Revolution.