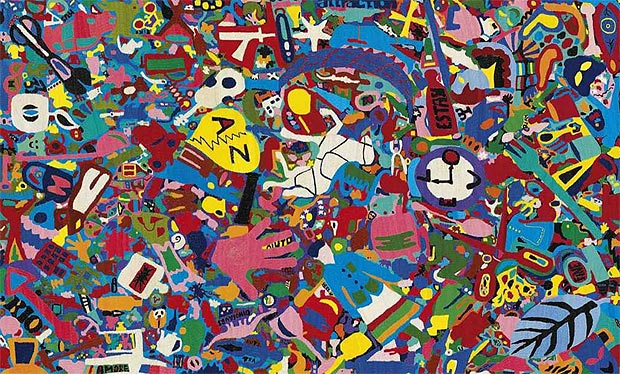 A not-to-be-missed appointment for any passionate collector of Italian art from the 20th and 21st centuries, Christie’s annual Italian Sale in London on October 14 immediately follows the Post-War & Contemporary Art Evening Auction. Featuring an extraordinary group of almost fifty lots carefully chosen by Christie’s specialists from some of the best international private collections, the

catalogue of the Italian Sale is especially focusing on important works created by the most sought-after Post-War masters. Highlighting the sale is a museum-quality and extremely rare Achrome by Piero Manzoni (1933-1963). With its relatively large, sublime and serene surface of chalky white beauty, this is an expectional example of the artist’s signature series. Executed in 1958-59, it comes from a prestigious European private collection and is estimated at £2,200,000-2,800,000. The sale is expected to realize an overall total in the region of £15 million.

Mariolina Bassetti, International Director in Christie’s Post-War & Contemporary Art Department and Head of the Sale: “In 2010 Christie’s set a new important record, achieving the highest total ever for an Italian art sale and demonstrating how a truly international audience of buyers is now keen to include Italian Post-War and Contemporary art in their collections. Thanks to the presentation of our catalogues and exhibitions, Christie’s contributed to an extensive phenomenon of cultural diffusion showing to the world the quality of the works created by the best Italian artists. In the evening of October 14, we will offer for sale an exceptional selection of lots by celebrated artists such Manzoni and Fontana, Gnoli and Boetti”.

Particularly rich in works created during the Post-War years, Christie’s Italian Sale will showcase another very significant piece by Piero Manzoni (1933-1963), alongside the above mentioned top lot. Also an Achrome, it was executed in 1957-58 and is a rare example of this early incarnation of Manzoni’s most celebrated series (estimate: £800,000-1,200,000.) Achromes of this kind are few in number and as, a reflection of their importance, similar examples are held in international public collections such as the Solomon R. Guggenheim Museum, New York and the Rijksmuseum Kröller-Müller, Otterlo.

Extraordinarily varied in terms of techniques, media and supports, is the selection of works by Italian 20th century star Lucio Fontana (1899-1968.) Highlighting this section is a rare Concetto spaziale dating from 1962.  As one of only eleven paintings executed in the same large format, rectangular dimensions, this work is a rare example within the Italian artist’s extensive oeuvre. Rendered in thick, inky-black oil paint, its ruptured and heavily impastoed surface clearly lingers on an ambiguous border, where painting takes on the characteristics of sculpture (estimate: £1,600,000-2,000,000)

A recent record-breaker at Christie’s auctions, Alighiero Boetti (1940-1994) will also be widely represented in our upcoming Italian Sale with a comprehensive group of works encompassing the materials and ideas that became hallmarks of his career. Amongst those selected by our specialists is a wonderful Tutto (illustrated below). Executed in 1988, this vast and detailed embroidered canvas stretching over two and half metres long is one of the largest in this series (estimate: £1,200,000-1,800,000.) The series of Tutto (everything) are among the very last works that the artist made and represent the culmination of his entire aesthetic – a kind of pictorial summation of his artistic career. Like Boetti’s Mappe or the Arazzi, in which the separate countries of the world or the individual letters that form words, were shown to combine into a cohesive unity, the Tuttos are embroidered representations of the world of objects as a selforganising composite of chaotic form.

Paintings by Domenico Gnoli (1933-1970) are rare and all the more sought after because of his untimely death at the age of only 37 in 1970. Dating from 1965, Busto femminile di dorso is a perfect example of Gnoli’s revelatory celebration of the details of everyday life, thrown into a new perspective by being shown on a huge scale, with a combination of both humour and of incredible workmanship. Estimated at £500,000-£800,000, Busto femminile di dorso has been widely exhibited, having been shown in some of Gnoli’s most important one-man shows in commercial galleries such as in Turin and Geneva, as well as his important museum shows in Brussels and Hannover.

The Battle of Bannockburn Luxury Chess Set from Stirling 1314