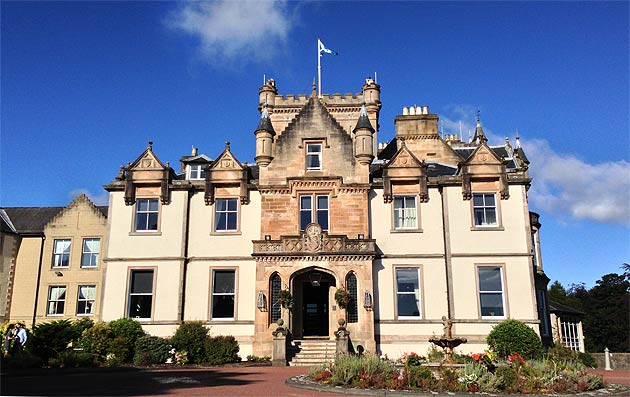 Sitting on the bonnie banks of one of Scotland’s most famous natural attractions and surrounded by the gently undulating Highlands, Cameron House on Loch Lomond is a five-star luxury property which is steeped in local history. 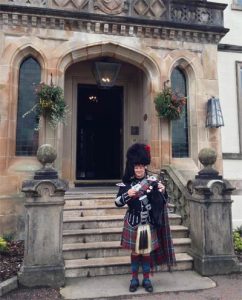 It takes its name from the strip of land which juts out into Loch Lomond like a nose upon a face. In Celtic times it was called “Cam Sron”, or “crooked nose”, and from this comes the name Cameron which it has sported ever since.

In 1998, the 18th century Baronial mansion was purchased by De Vere who invested a further £60 million into the property, creating the fabulous venue that greets guests today. There are a total of 129 rooms and we stayed in one of the 12 Contemporary Feature Suites which come with their own private entrance and stunning views of the Loch. Presented in a stylish Scottish décor, this calibre of room is extremely spacious and is furnished with a king bed, a writing desk, a leather chest as well as a small lounge area with its own large flatscreen TV. In fact, the suite is so comfortable and well equipped that you feel that you never want to leave. Within the connecting bathroom, there is a double sink lined with a generous selection of Cameron House’s exclusive set of toiletries which have been designed by Arran Aromatics, a standalone bath dressed in a tartan design complete with its own television and ceiling-mounted surround sound speakers, as well as a walk-in powerful monsoon shower. The look is finished by a plethora of white towels and fluffy bathrobes stitched with the letters “VIP”. 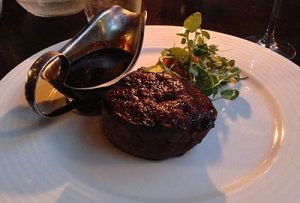 There are four eateries to choose from at Cameron House which are namely the flagship Michelin starred Martin Wishart at Loch Lomond, The Boat House which overlooks the private marina, the Claret Jug and The Cameron Grill where we dined. It’s a relatively informal atmosphere and this 120-cover restaurant is furnished with large dark leather seating arranged in rows, whilst framed quilts adorn the walls. Upon our arrival, we were immediately guided to our table and introduced to our hosts for the evening, Fiona and Ben, who later explained the key components of each course. The à la carte menu is pretty comprehensive and any dietary requirements are well catered for as everything is freshly made by the team who can be seen hard at work in the open kitchen.

For the starter, I tried the Cameron Grill Scottish Salmon Bar which consisted of a rectangular platter of four different types of smoked salmon (oak, Gravlax, 10-year old whiskey, and honey and beetroot), delicately garnished with tiny portions of chopped onion, caviar, egg, pickled cucumber and shallots, and finished with a capers and herb dressing. Each variety had its own distinct flavour, but the smokey nature of the fish and the said infusion were very nicely balanced. My partner opted for a fresh and light Heirloom tomato salad which can also be selected as a side dish and was equally well prepared. Both were complemented by a portion of soft potato bellinis in addition to blue cheese, black olive, garlic and potato, and sun dried tomato bread.

Continuing the theme of fish, and joined by a glass of crisp house wine, I decided on the whole baked sole for the main course and the result did not disappoint. Prepared with poached grapes and a white wine sauce, and topped off with watercress, green peas and large spring onions, the sole was divine and lifted off the bone without any effort. Every mouthful of this and the side of creamy three cheese potato and thyme dauphinoise was a pleasure and the moist texture of the fish meant that this dish disappeared with speed. 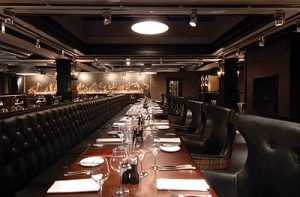 The beef served by The Cameron Grill is sourced from the local Cairnhill Farm in Ayrshire and is claimed to be some of the finest in Scotland. With that in mind, my partner tried a succulent fillet of steak dressed with a red wine sauce with a side of carrots. Yet another culinary success.
To round off what had been a superb meal, the dessert menu tempted us with a wonderful Crêpe Suzette filled with vanilla sauce, orange and Grand Marnier, before cleansing our palates with some fresh mint tea.

It was not only the cuisine that was immaculate, but the service was just as well choreographed and we were never waiting for lengthy periods between courses. Adjacent to this restaurant is the Great Scots Bar which offers over 200 different varieties of whiskey, the perfect spot for an after dinner night cap.

Breakfast back in The Cameron Grill welcomes guests with the hearty components of a full English, a small buffet featuring delicacies such as fresh bread, fruit, cereals, nuts and homemade cake, as well as ‘favourites from the kitchen’ which include a three egg omelette and eggs benedict. 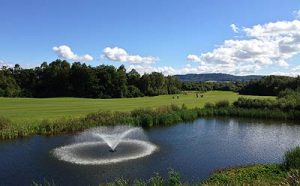 There is plenty to do within the sizeable grounds of Cameron House, meaning that guests can truly relax during their stay without having to travel far. There is firstly the Leisure Club which comes with a 21-metre nicely indoor swimming pool, a children’s swimming pool complete with a water slide, a Jacuzzi, sauna and steam room, a state-of-the-art gym and two squash courts. Secondly, just a few minutes’ walk from the main reception, stands a ten-seater yellow Cessna Caravan sea plane where visitors can enjoy stunning vistas from the air of the Loch Lomond national park (£129 per person). Alternatively, staying closer to dry land, there is the champagne cruise aboard the 1500 hp, 12.5 tonne, 46 ft Celtic Warrior yacht which sails numerous times a day from the marina next to The Boathouse. The one hour tour which we enjoyed (priced at £49 per person), once again is for a maximum of ten people at a time and sees visitors being regaled with a history of the area by the highly knowledgeable skipper who picks out features. These include some of the 30 islands and the Loch Lomond golf course where the top Albatross membership package costs £195,000 per year (excluding the £15,000 green fees) and only 500 members are ever allowed. 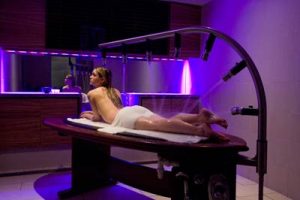 Around two miles from the gates of Cameron House is the Carrick Spa which can be reached via the hotel’s shuttle service that operates between the two sites twice every hour. This is yet another must-visit haven of paradise that overlooks the putting greens and 18th hole of the immaculate 71-par championship Carrick golf course.

We sampled the hot stone full body massage (£89 for 55 minutes) which saw the therapist use ESPA Body Oil combined with hot volcanic stones to soften and warm target muscles to ease aches and pains as well as helping to relieve deep muscle tension and stress. The session culminates with a lie down on one of the many beds in the relaxation room, a cup of sweet tea and the opportunity to drift off to the sound of the mellow music. There is also a café where spa go’ers can wander in with their bathrobes and enjoy some lunch or simply have a drink on the veranda overlooking the beautifully-manicured golf course.

Beyond the 17 wet and dry treatment rooms, there is a multitude of facilities to choose from such as the tepidarium, caldarium, Hammam steam room, the circular Hydrotherapy pool and 20 metre relaxation pool on the ground floor.

Cameron House has everything you could ever wish for: an idyllic setting, luxury at its finest and impeccable service and accommodation to match. This hotel should definitely be top of any list when staying in Scotland.

Expect to pay around £414 per night for a Contemporary Feature Suite including breakfast.

For more information, or to make a booking, visit www.cameronhouse.co.uk.

See more of Cameron House by clicking on an image below: