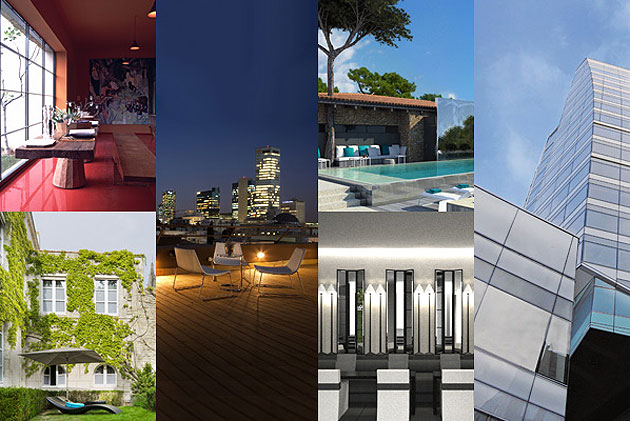 Design Hotels has new member hotels in fresh, offbeat destinations as well as old favourites. From our continually expanding portfolio, here are the most recent.

The first member in Ljubljana is the right base from which to explore the upcoming creative scene in Slovenia or stay in the hippest neighbourhood of Tel Aviv and get into the local scene unfolding right outside. Discover hidden gems in France, from the fragrant hillsides of Provence to the stunning coastline of Corsica. In the two biggest global hubs are new options too. In London, retreat into a contemporary sanctuary whose spacious suites boast private terraces or set your sights on the incredible New York skyline from trendy East Village.

A first in more ways than one, Vander Urbani Resort is the first Design Hotels member in Slovenia and a premier in the city of Ljubljana as a design and boutique hotel. Like the city itself, the historical façade of this intimate 16-room property belies a contemporary heart with organic, fluid surfaces, one-of-a-kind design pieces and a minimalist style. Another first, Brown TLV in Tel Aviv opens its doors to the colourful neighbourhood of Neve Tzedek where restaurants double as galleries and galleries host underground events. Inside the hotel is a different story, with warm chocolate and caramel walls, dark wood floors and vintage-inspired furniture, creating nooks for quiet reflection.

In the heart of Provence, hidden amidst olive groves and scented lavender fields, is Oliver and Patrizia Massart’s labor of love and art. Housing 250 pieces from their personal collection, each of the 10 private villas at Domaine des Andéols is inspired by an artwork, colour or theme. In La Rochelle, La Monnaie Art & Spa Hotel uses the hallways, lounges and 36 rooms and suites as a transient gallery, offering changing exhibitions in conjunction with the nearby Galerie Albane. Its 17th century building has also been given a modern makeover inside with iconic furniture and a color palette of whites and greys tinged with bright accents. La Plage Casadelmar in Corsica is nestled in a fine sand cove, edged with pine trees and red rocks in the bay of Porto-Vecchio. Award-winning architect Jean-François Bodin has used the crisp sunlight and colours of the surrounding landscape to create an inside-outside structure with an easy-going elegance. With only 15 rooms and suites, like sister property Casadelmar nearby, the focus is on individualized service.

The Standard, East Village in New York offers a relaxed atmosphere in sync with the vibe of its trendy bohemian location. It boasts a relaxed lounge called The Living Room and a Zen-like outdoor garden – a rarity in the city. Each of the 145 guest rooms and suites is blessed with floor-to-ceiling windows offering iconic views of the city. Anoushka Hempel’s latest tryst in London after Blakes Hotel, La Suite West is also imprinted with her unmistakeable striking contemporary style. The design journey begins in the reception area where white-washed walls are juxtaposed with black marble flooring, floor-to-ceiling shutters and an almost 20-foot long marble reception desk. Most of the 45 rooms and 35 suites carry this theme forward and strike a note of romance with four-poster beds.