Alan remains a highly regarded distiller amongst his peers and is regularly approached to share his vast knowledge and experience with industry colleagues around the world. Simon Wittenberg caught up with him to find out more.

LM: What is the role of the Master Distiller, and what qualities do you need for this job?
AW: The master distiller is in charge of the production of The Glenlivet whisky. A distiller ensures that all of the raw materials come together, and we produce whisky of the highest standard of quality, a standard that’s has been handed down over all these years.

LM: You have worked as a mashman, brewer, stillman and are now an award-winning Master Distiller. Do you have any particular career highlights?
AW: I have a lot of career highlights over the years. One of them was being made the Master Distiller of The Glenlivet back in 2009. It’s something I’ve been very proud of, as The Glenlivet started the modern whisky industry. But there have been a lot of other highlights along the way. For example, we launched a 50-year-old Single Malt whisky with my name on it.

LM: How did you become interested in whisky?
AW: [Laughs] You’re asking a Scotsman that? It’s in the blood of a Scotsman I think. It’s quite easy – it’s rooted in the area and my family history. My grandfathers and uncles were farmers and there were lots of distillers in amongst them. Farmers are a nice link to making whisky because distilling is a part of the farming cycle – the barley growing right now will be harvested in September usually but it’s been faster this year so more likely August and September, and that will be our raw material for the following year. It’s a part of the agricultural cycle – George Smith (the founder) was also a farmer and farmed in Upper Drumin and that’s how it all fits in!

LM: Do you travel the world looking for inspiration?
AW: No, I am more or less based in Scotland. I do get trips abroad, which is nice, and even when I’m on holiday, I’m always looking to see if there are breweries, wineries or distilleries about. Last year when I was in Greece, I visited a Raki distillery which also produced ouzo, and that was on the island of Santorini. I’m always fascinated by how a country has developed its own alcohol industry, because it’s a very old science. It’s probably the oldest bio-chemistry known to man, taking the raw materials that the community has and conjuring it into a wine, a beer or whisky – it’s always something I’ve been fascinated in. Obviously, our forbearers grew barley in these parts, and from that they made whisky.

LM: You recently launched your latest whisky called Captain’s Reserve. What is unique about it?
AW: The Glenlivet Captain’s Reserve is unique in the sense that we’ve taken our inspiration from one of the last owners of the distillery, which was Captain Bill Smith Grant, who was the great-grandson of the founder, George Smith. A hundred years ago, he took over the running of the distillery. 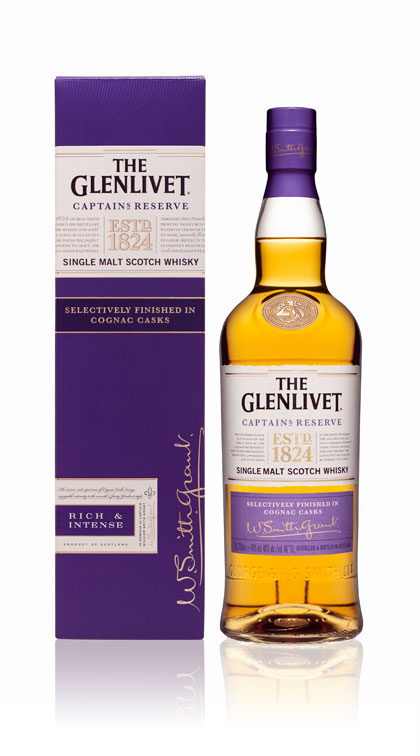 The connection with France was quite interesting in that we’ve used a French oak cask before, but this time we’ve used casks that mature cognac, and we used that to give us an additional flavour to the distinct fruity-floral spirit of The Glenlivet. The beauty of that is that the smoothness and the style of The Glenlivet works very well with the cognac casks – it adds something a little bit different as well as complements and adds to the richness.

LM: How did you choose the Collaborators (a Michelin-starred chef, photographer and mixologist) for the unveiling of the Single Malt?
AW: The Glenlivet Captain’s Reserve is a new single malt that has been selectively finished in high-quality cognac casks. Throughout the creative world, a finishing touch can be the defining characteristic to a piece of work and has the power to add a different perspective. The world of Single Malt Scotch whisky is no different. To highlight how a finish can do this, we collaborated with world-renowned names from the culinary, photography and drinks worlds by holding exclusive immersive experiences around ‘finishing touches’ for our guests in London.

We were lucky to work with the legendary Fergus Henderson MBE, co-founder of St John restaurants, the brilliant Bobby Hiddleston, co-founder of the popular Soho bar Swift, and Addie Chinn who is a renowned beverage photographer.

LM: What do you enjoy about working at The Glenlivet distillery?
AW: To me, The Glenlivet distillery is part of my heritage, it’s very much the home of the modern whisky industry. The magic location is something I love – it sits in the foothills of the Cairngorms, and also there are splendid views down the valley to Benrinnes. It’s very much rooted in the historic past, but is still very lively and busy to this day and something that we’re immensely proud of.

LM: What is your luxury in life away from the world of whisky?
AW: My luxury is probably walking my dog in the surrounding Scottish countryside. That’s a great luxury – getting out into the open spaces. I stay quite locally from the distillery – around 15 miles – and I have the mountains behind me, and I can travel to the coast to see the lovely scenery.

LM: What’s next for The Glenlivet?
AW: There’s a lot going on. We’ll obviously continue experimenting and look at different ways we can present The Glenlivet in different styles and maturation, so there’s always something going on and something that will come down the line that will entice customers.

LM: Thank you for your time.