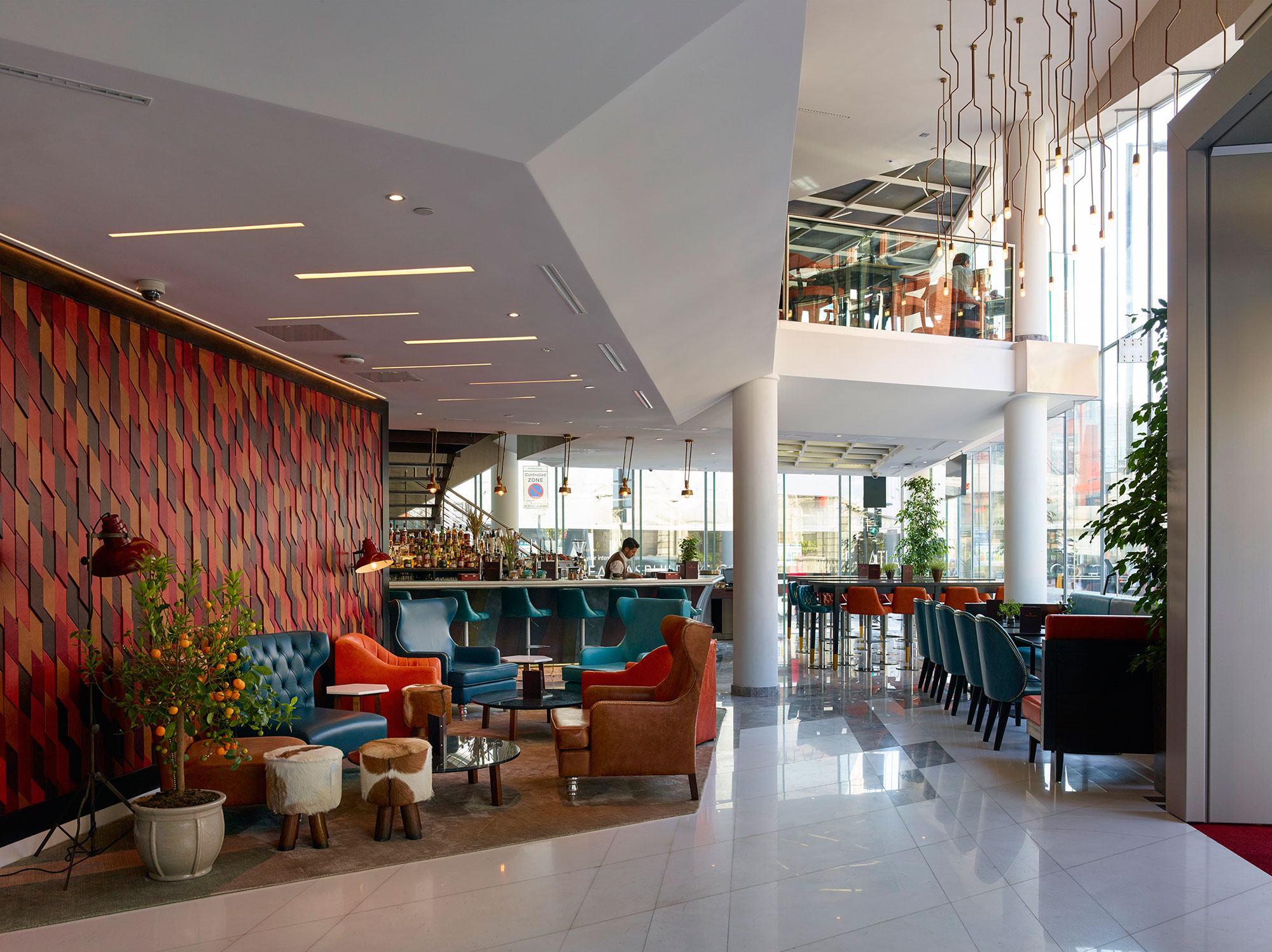 Even in a city like London, it’s not often you feel such a frisson of excitement as you approach a new building. From nearby Silicon Roundabout, London’s epicentre of entrepreneurial endeavour, M by Montcalm makes a bold statement as it soars skywards, tapering steeply to an improbably sharp point that pierces the sky in dramatic fashion.

Meanwhile, windows of varying height punctuate the exterior at unexpected angles, the whole spectacle glinting invitingly in the Summer sun. 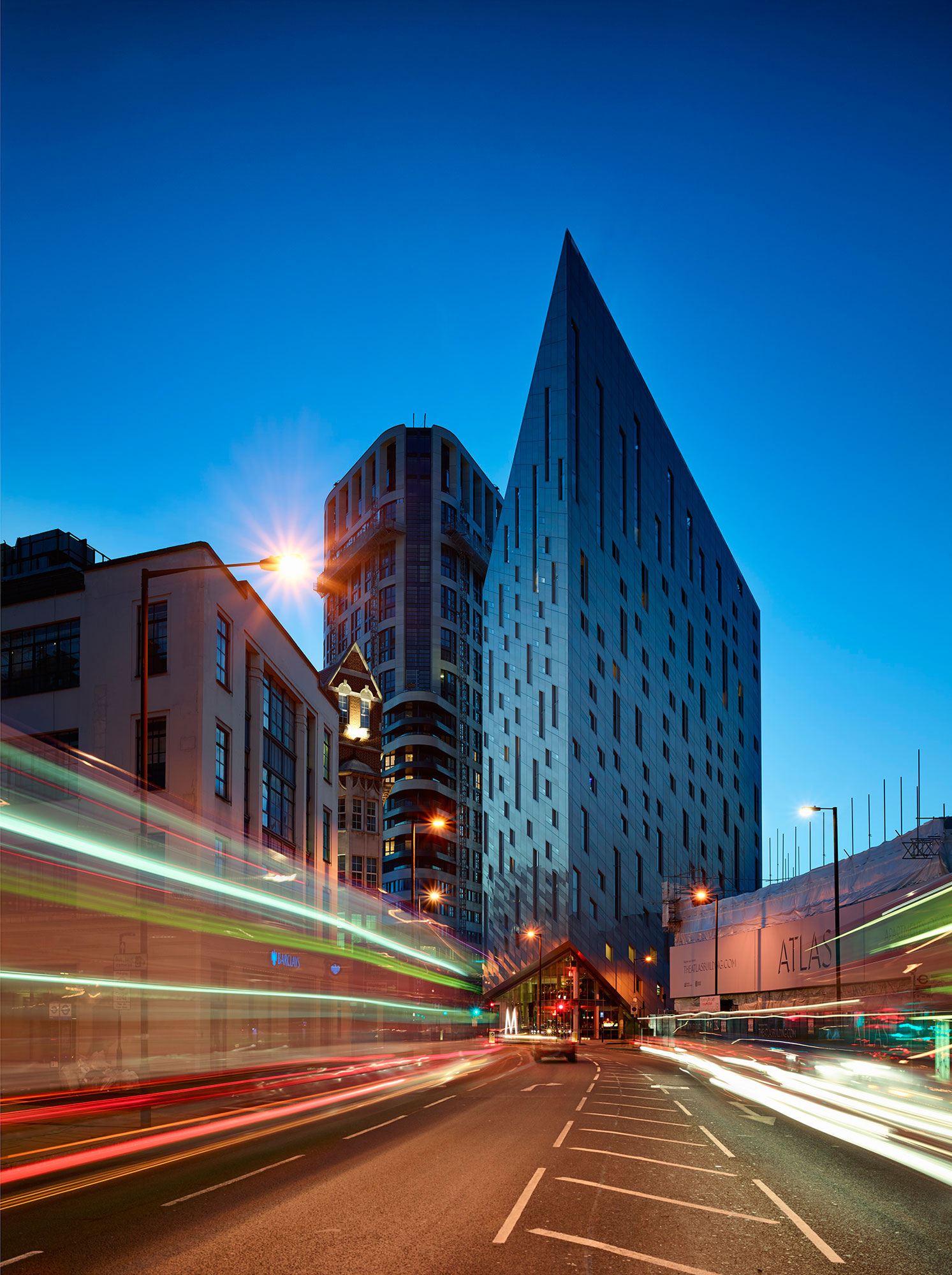 M impresses both outside and in. One of London’s most striking new hotels, and a member of the Luxury Hotels Group, its futuristic façade was influenced by the work of Op-Art pioneer Bridget Riley, part of the Tate Collection. As you enter the lobby, alive with the energy of the surrounding streets, that same eye-catching pattern hits you, this time across a leather-clad wall.

Fittingly for a hotel that straddles trend-setting Tech City and avant-garde Shoreditch, décor is an eclectic mix of sleek, shiny modernity and relaxed retro-chic.

Tech City is London’s digital hub, and M by Montcalm embraces the forward-thinking vibe of the area with a suitably tech-enhanced experience. You can tap to your heart’s content on the digital coffee tables in the lobby, and there’s a tablet in each room that puts everything from opening and closing the curtains to ordering room service at your fingertips.

Taking in the scene at Tonic & Remedy, the buzzing bar and restaurant that traverses the lobby and mezzanine, it’s clear this is five star for a millennial mindset. 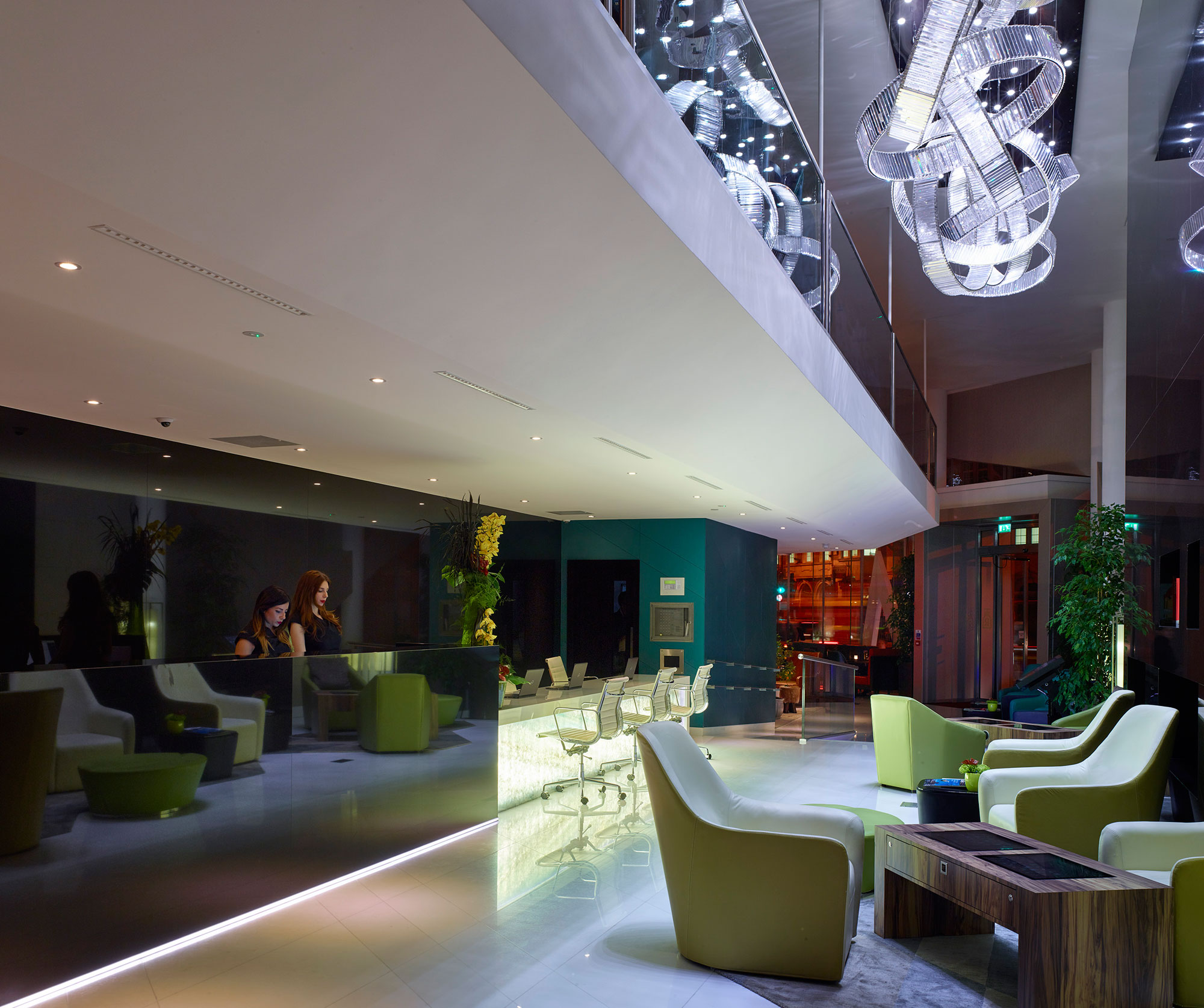 Creatives with MacBooks exchange ideas over a flat white, and movers and shakers meet for early evening drinks. Tonic & Remedy takes its name from the area’s erstwhile apothecary trade, and the drinks list bristles with herbal concoctions by award-winning mixologist Jeremy Pascal.

Try the aptly-named Apothecary, served in a tankard and made with herbal liqueur, dusted with icing sugar and set alight with a theatrical flourish, making this feel like anything but the traditional hotel bar.

Through the lobby lounge, beneath a chain of giant crystal rings suspended from the ceiling, you find the lifts. As you emerge, it strikes you that even the corridors here are refreshingly original – a riot of neon-lit lines disappearing into the distance. It’s a teaser for the room itself; multi-hued mood lighting comes as standard. Natural light floods in through distinctive diagonal windows, and the bathrooms are monochromatic marvels – all black-and-white marble and toasty underfloor heating.

After a rain shower drenching, don a fluffy bathrobe and find a fragrance to take your fancy from the aroma box. It goes without saying that the higher your room, the better the view behind those electronic curtains. But head to the 17th-floor Urban Coterie restaurant and you’ll have London at your feet.

It’s a lofty, sunlit space where tables fan out from a centrepiece wine cellar, arresting modern art adorns the walls, and icons of the city skyline dot the horizon – yet for all the spectacle, Michelin-starred chef Anthony Demetre’s modern British menu is still the star of the show. 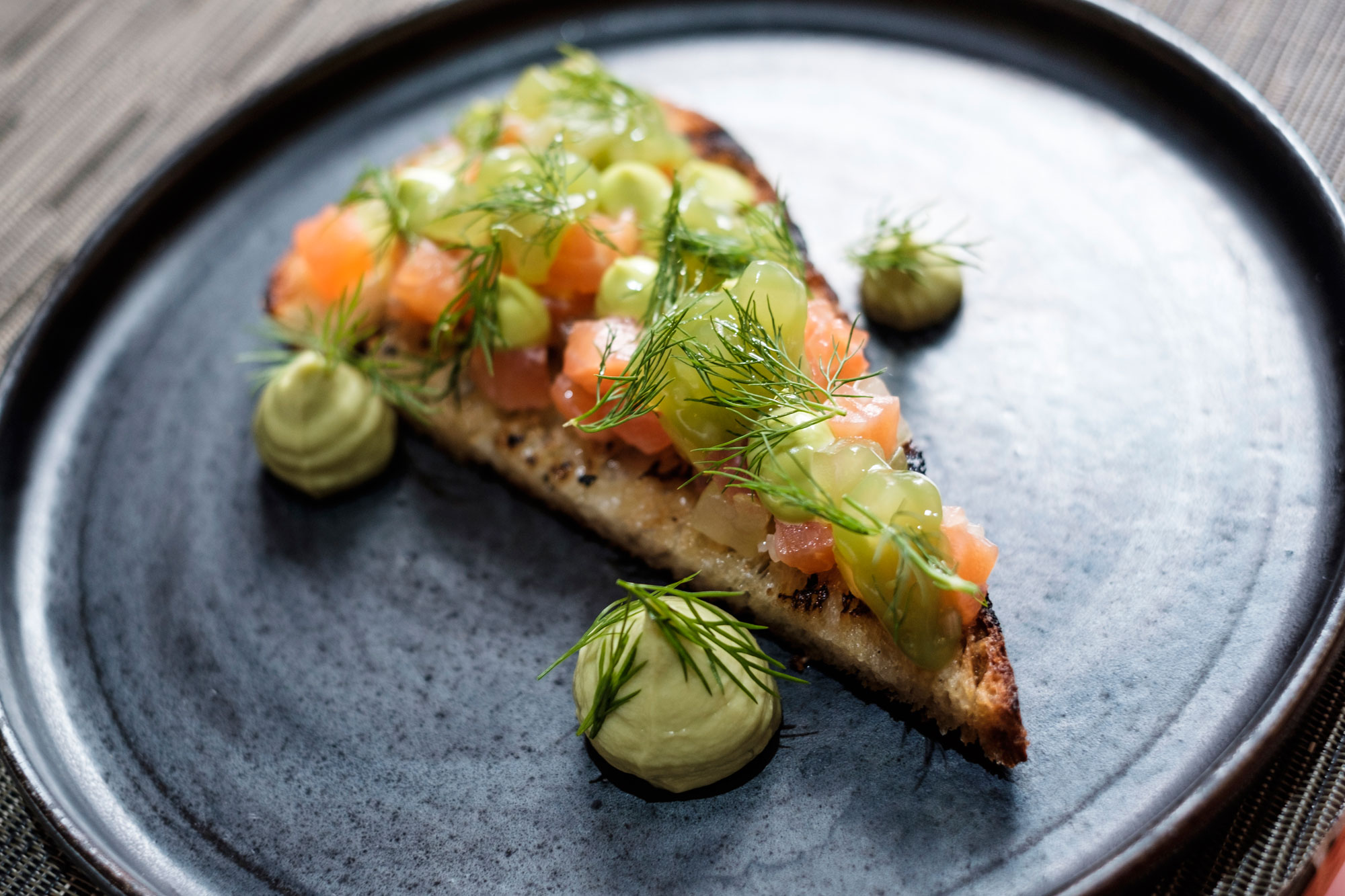 Appetite sated, your mind turns to indulgences of a different kind. Tucked away beneath the streets is a spa, walls dotted with gold-leaf Versace tiles. 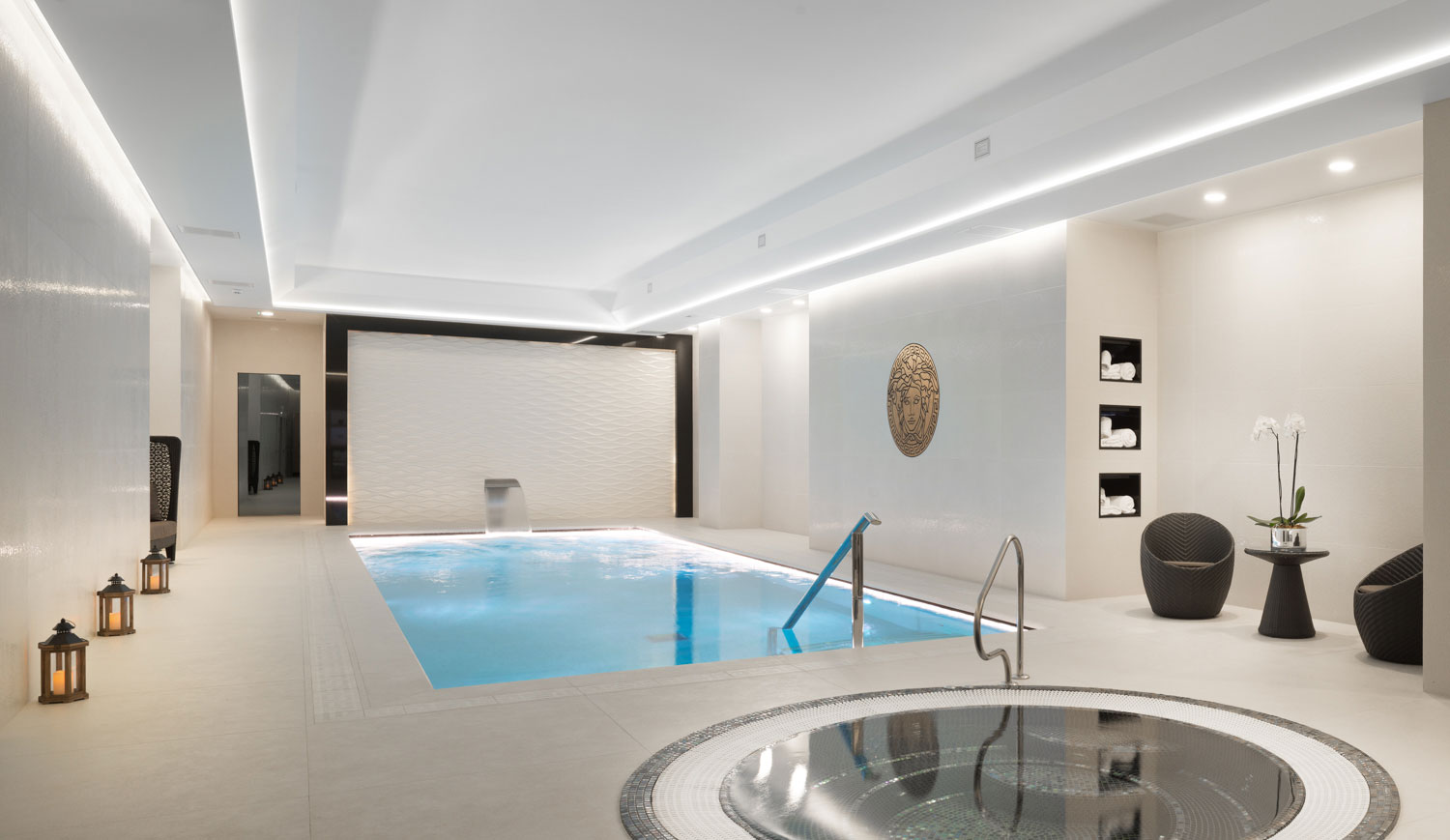 Relaxing in the pool, post-treatment, you ponder what the eponymous M might stand for. “More, please!” gets my vote.