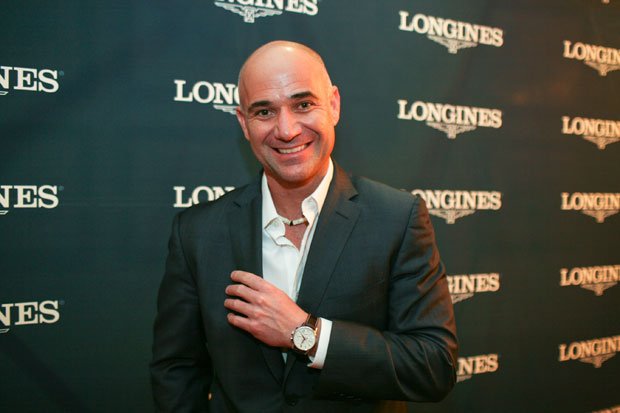 Multiple time Grandslam Tennis Winner and Longines Ambassador Andre Agassi teamed up with Longines and fine jeweler Shreve & Co. at the Stanford Shopping Center to host a fast serve contest followed by a Questions and Answer session with the USTA junior players to address the importance of education.

Andre Agassi has been one of the Longines brand ambassadors for since 2007. As a player that srtived for perfection, Andre Agassi was an ideal partner for the nearly 180-year-old Swiss watch brand. Andre turned pro at the age of 16, earned 60 men’s singles titles in his career, and was the first male player ever to win all four Grand Slam titles and an Olympic gold medal.

The fastest serve contest with Mr. Agassi was the first of its kind at Shreve and Co. Twenty of the top ranked female junior players from the USTA’s Northern California division competed for a once-in-a-lifetime opportunity provided by Longines. Twelve year old Elena Van Linge from Menlo Park, CA was the talented young tennis player with the winning fastest serve. Elena will be flown to New York City to compete in the Longines Future Tennis Aces on the Road to the French Open against the top ranked girls ages 10-12 of the USTA Eastern Division in April 2012. These young tennis stars will compete for a grand prize trip to Paris to play on the famous clay courts at Roland Garros with 16 players from around the world. The two finalists of the tournament in Paris will get the privilege to rally with Longines brand ambassador Stefanie Graf, Andre’s wife, and famed tennis star.

Student Jayde Porter from Andre Agassi College Preparatory Academy flew in from Las Vegas to join the event at Shreve & Co. Jayde recited the Agassi Prep Code of Respect and told the young players of the highlights of her education at Agassi Prep. This event and the Palo Alto location were of particular importance to Jayde since her top choice for college is Stanford University where she plans on majoring in Neuroscience.

In addition to the fastest serve contest, Longines hosted a smash court competition for a small donation. The player with the fastest serve received exclusive autographed Andre Agassi keepsakes. Proceeds collected from the smash court will go towards the Andre Agassi Foundation for Education benefiting the Longines Elegance Scholarship Fund. The scholarship was founded to promote higher education for students enrolled at the Andre Agassi College Preparatory Academy. Agassi Prep was founded by Mr. Agassi in 2001 to provide underserved youth in Las Vegas with an opportunity for a quality education. To date, Longines awarded scholarships to 16 students from Agassi Prep to further their higher education. Both Andre and Longines believe that every child is deserving of an outstanding academic experience.

As part of the festivities, guests were able to view Longines’ collection of elegant watches on display at Shreve & Co., including a special edition Longines Master Collection Moon Phase “Andre Agassi” watch. This special watch was created as a tribute to the eight Grand Slam Titles won by Andre Agassi. The silver-finished “barleycorn” patterned dial features a golden “8” in Arabic numeral. This model is number 1 out of only eight pieces produced. Longines and Shreve will donate 100 percent of the $18,000 retail sale of this one-of-a-kind watch to the Longines Elegance Scholarship Fund.

On the evening of November 30th, Longines and Shreve hosted a private dinner at the Villa Taverna in downtown San Francisco. Select guests were invited to mingle with Mr. Agassi during cocktails and dinner. Mr. Agassi spoke further about his foundation and his plans for expansion across the country.

Since 1832 Longines has stood for elegance, with a strong devotion to tradition, making the brand a natural fit for Shreve & Co. The Palo Alto location of Shreve & Co. has been open since 1976 and Longines is proud to be a part of this prestigious store.