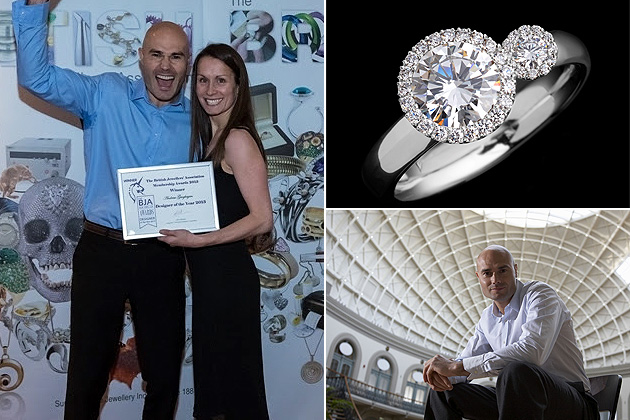 Based in the picturesque county of Yorkshire, England, Andrew Geoghegan, designer and Founder of British fine jewellery design house, AG, first came to our attention back in 2012 when we were introduced to his collection of exquisite cocktail rings.

We enjoyed his jewelled creations so much that we featured him on multiple occasions and subsequent telephone conversations between Andrew and Luxurious Magazine Founder, Paul Godbold, confirmed him as a breath of fresh air in the jewellery industry. With his no nonsense approach and single minded-pursuit to create the finest jewellery, Andrew became one of our ‘must watch’ designers. We look upon Andrew Geoghegan as one of the jewellery industry’s true ‘nice guys’ and ‘nice guys’ aren’t supposed to win, but this time, we are were enormously proud and pleased to hear that this wasn’t going to be the case when he was announced as the winner of the British Jewellers Association (BJA) ‘Designer of the Year’ award 2013.

The announcement came during an awards ceremony in Birmingham, home to the world-famous Jewellery Quarter. At the ceremony, Andrew fought off some extremely talented competition in the form of: Jessica Flinn Designs, Babette Wassermann, Lucy Quartermaine, Deakin and Francis and Charmian Beaton Design to scoop the award.

“It’s an incredible achievement” Geoghegan said of his win, “2013 has been another remarkable year for AG. I continue to design and create with the same intense passion and boundless energy with which I started (albeit with slightly less sleep now since my son was born). My aim has always been to create mesmerising designs at the very height of opulence and luxury, essentially putting my all into every piece and creating something which helps people to express their love. It’s my fanbase whose votes have got me this award and that is great to know because I put them at the forefront of everything I design. It’s hugely exciting times for AG at the moment as we look to begin exporting next year – making our international debut in Munich. We’ve also moved to a beautiful converted farm building in the middle of the Yorkshire country side – I have a feeling inspiration will be at an all time high once I’m surrounded by even more of our glorious landscape.”

Andrew, who moved to West Yorkshire when he was just two years old, is a true story of what dedication, inspiration, raw talent and persistence can achieve – having started brand AG in a shed at the bottom of his parents garden. Since then, he has developed his AG brand – an incredible collection of bridal jewellery, show-stopping cocktail rings, pendants and earrings – into one of the most sought after collections in the world. With unwavering passion for his craft and dedication to world-class design, he has charmed, mesmerised and fascinated retailers, customers and the press and has been hurtled into the spotlight as a result.

Already acknowledged as a key innovator in the jewellery industry (Andrew was named on the ‘Hot 100’ list of jewellery movers and shakers in 2012), the BJA ‘Designer of the Year’ award is regarded as one of the toughest and most respected accolades in the industry.