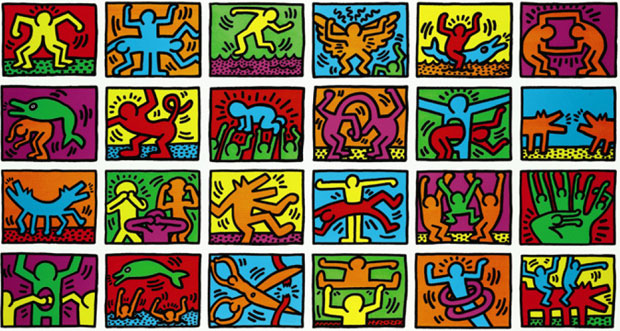 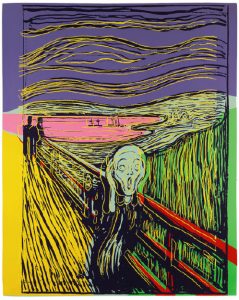 Sotheby’s London biannual sale of Old Master, Modern and Contemporary Prints will take place on Thursday, 29 March 2012. Superlative examples by pre-eminent artists who are leaders in the print-making field span a period of over 500 years, from the Renaissance through the Dutch Golden Age to the Pop Generation and beyond. The 181-lot auction is expected to bring in the region of £2.3 million*.

Andy Warhol’s The Scream (After Munch)
The cover lot of the sale is a screenprint of Andy Warhol’s The Scream (After Munch), produced in 1984 in a unique combination of colours that are exceptionally fresh and vibrant. Warhol’s appropriation of iconic subject matter is taken to its obvious conclusion in this work, an image that is one of the most instantly recognisable in both art history and popular culture. Viewed within the context of the Pop artist’s exploration of famous images from the history of art, Munch’s seminal masterpiece was the perfect vehicle for Warhol’s vision. Commissioned as an edition print, which was never published, Warhol’s The Scream (After Munch) exists only in unique colour variants. Warhol used Munch’s very rare lithograph of The Scream as his primary source. The present version is estimated at £150,000-200,000. 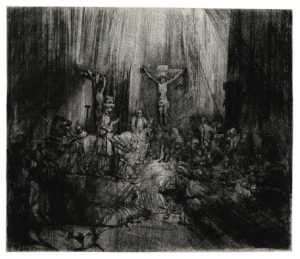 Headlining the Old Masters section of the sale is a monumental etching by Rembrandt that is often singled out as the masterpiece of the artist’s graphic oeuvre. Christ Crucified Between the Two Crosses: ‘The Three Crosses’ rivals the master’s paintings with an impact achieved through its subject matter and grand scale. This rare work was executed in the delicate medium of drypoint. These impressions were produced with enormous care, as Rembrandt experimented with different tone and inking effects. The artist attained extraordinary results through this medium, and here the overall effect is atmospheric and dramatic. The drypoint lines have created a rich, velvety tone, for which this print is renowned. The fourth state (of five) of 1653 is considered one of the most exciting states of this subject, and the present work exhibits drastic differences to the previous three states. Rembrandt had previously produced a series of prints that had a more serene atmosphere, chiefly realised by flooding the scene with light. In contrast, here Rembrandt uses a dense network of lines and a much sparser use of light. This not only imparts the fourth state with a more imposing atmosphere, it also diverts attention from the remains of previous states. The artist has made Christ the focal point of the print by employing sharp and powerful diagonal lines and darkened passages on the left and right, creating the illusion of two curtains drawing in on the figure of Christ. Rembrandt chooses to illustrate the moment of Christ just before his death on the cross, capturing his physical anguish and pain through the expression on his face. This highly sought after print is estimated at £250,000-350,000.

Christ Preaching (‘La Petite Tombe’) by Rembrandt is an etching with engraving and drypoint, circa 1652, distinguished by a very fine ‘black sleeve’ impression. The artist’s subtle use of drypoint produces a rich, velvety burr on Christ’s robe and on the sleeve of the man standing at far left in the foreground; in later ‘white sleeve’ impressions, the rich burr disappears (est. £30,000-40,000, lot 18). Among Rembrandt’s female subjects, Woman at the Bath with a Hat Beside Her, is particularly intimate, showing a nude as she prepares to bathe. This etching and drypoint from 1658 demonstrates a mastery of light and shadow and is printed on laminated Japanese paper, which imparts a softness suited to the subject (est. £40,000-60,000, lot 24). Collectors of prints by Rembrandt will be afforded the opportunity to acquire the complete album containing over 80 etchings by the artist, produced circa 1807-1809. The Receuil De Quatre-Vingt-Cinq Estampes Originales was first published in 1789 as the ‘Basan Receuil’, comprising posthumous prints of the artist’s original copper plates, and takes its name from the Parisian print dealer and publisher Pierre-François Basan. The landmark publication comprised impressions taken from Rembrandt’s original plates and was the first survey of its kind of the artist’s printed oeuvre. It was coveted by art collectors and served as an illustrated catalogue raisonné (est. £60,000-80,000). 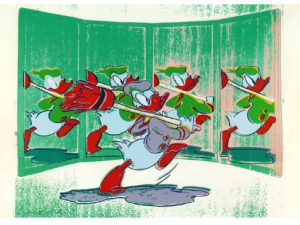 Prints by Pop artist Andy Warhol lead the Pop Generation section of the sale. In addition to Warhol’s print of The Scream (After Munch), several iconic images by the twentieth-century master feature icons of the modern age. A screenprint of Superman from the Myths Series, produced in 1981, is estimated at £60,000-80,000 and three screenprints of Marilyn, each in different colour variations, range in estimate from £40,000-60,000 (lots 160 and 161) to £60,000-80,000 (lot 162). Warhol’s distinctive method of adopting existing images and forms from mass media and making them his own can be seen in his Anniversary Donald Duck, an impression in a unique colour combination which derives from the original version of Walt Disney’s Donald Duck (est. £25,000-35,000, lot 170, pictured). In 1985, Warhol renewed his earlier interest in advertisements.