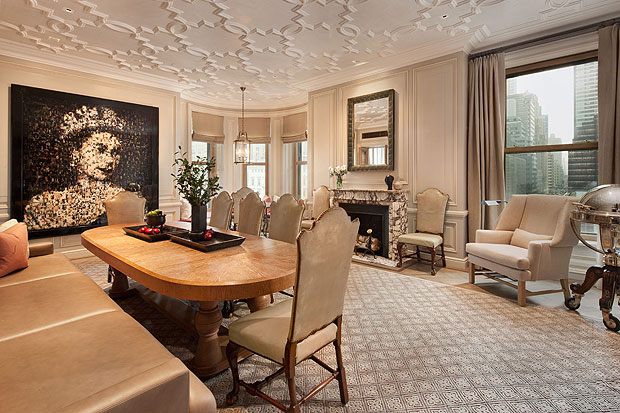 The Newly renovated Astor Suite at the Plaza Hotel Manhattan’s celebrated hotel/condominium, will come onto the residential market at $165,000 per month.

The announcement was made by Melanie Lazenby daughter of James Bond actor George Lazenby and Executive Vice President at Prudential Douglas Elliman. Making the Astor Suite at the Plaza Hotel the most expensive rental apartment ever to hit Manhattan’s residential Manhattan market.

“We are extremely excited to show this incomparable residence to perspective buyers,” said Lazenby, the fourth highest grossing real estate broker at Elliman, New York City’s largest brokerage firm.   “Offering sweeping views of Central Park, Fifth Avenue and beyond, this historic home has three bedrooms and five bathrooms with over-sized public rooms, including a living room, library, and dining room, and the guest apartment across the hall adds an additional bedroom, bathroom, and sitting room with a private terrace,” she added.  In addition to being one of her firm’s top agents, Lazenby is the daughter of George Lazenby; the step-daughter of tennis hall of fame inductee, Pam Shriver; and the daughter of Gannett heiress, Christina Townson.

The Plaza was built in 1907 by Henry J. Hardenbergh and was originally envisioned as an apartment hotel with residents holding long leases.  The first guest to check in was Alfred Gwynne Vanderbilt, who took rooms on the fifth floor as it was considered to be the best floor in the building – and the corner suite, was not only the largest…but with the most desirable views. In the 1930s, John Jacob Astor VI lived in these rooms for several years – and after World War II, the rooms became the Presidential Suite, available on a nightly basis – and where it was occupied by guests such as the Duke and Duchess of Windsor and John F. Kennedy.

“Never before has a residence with such historical significance been on the market,” said Lazenby.  “It is a truly an honor for me to represent this stunning home and it will be an even more remarkable opportunity for someone to live and enjoy the gracious, spectacular spaces, as well as the amenities and location that the Plaza Hotel offers.”

The Astor Suite at the Plaza Hotel in more detail

Spanning approximately 5,087 square feet on the most coveted corner of the building – facing both Central Park and Fifth Avenue, the Astor Suite at the Plaza Hotel has undergone an almost two-year, multi-million dollar renovation by renowned designer Steven Gambrel of S.R. Gambrel Inc. Gambrel travelled extensively through some of the greatest estates in Europe to gather inspiration for what is undoubtedly one of his most elaborate interior projects.  The oak library, doors, and windows were built by hand in Oxford, England and the same team of artisans who restored Windsor Castle after the fire installed the woodwork in the Astor Suite.

The Astor Suite at the Plaza Hotel is filled with 18th, 19th, and 20th century furniture and artifacts; intricate plaster moldings; remarkable antique marble fireplace mantles; and hand hammered leather walls created in France in a one-of-a-kind pattern, silk rugs, and herringbone patterned wood floors.  He sought to incorporate as many authentic details that speak to the history of the building as possible.  However, in contrast to old world details, the Astor Suite at the Plaza Hotel boasts “state-of-the-art” technology including a new heating/cooling system with humidifiers for protecting artwork,  a Savant system that can control everything from the music to the lighting in every room from an i-Pad, and televisions hidden behind paintings on a hydraulic lift.  The owner of the apartment, who wishes to remain anonymous, paid almost $30,000,000 for the Astor Suite at the Plaza Hotel, which consists of two units, in 2007 and has spent millions to restore, upgrade, and furnish the apartment to the absolute highest standard.

The $165,000 monthly rental of the Astor Suite at the Plaza Hotel includes all furnishings, electronics, artwork, and maid service.