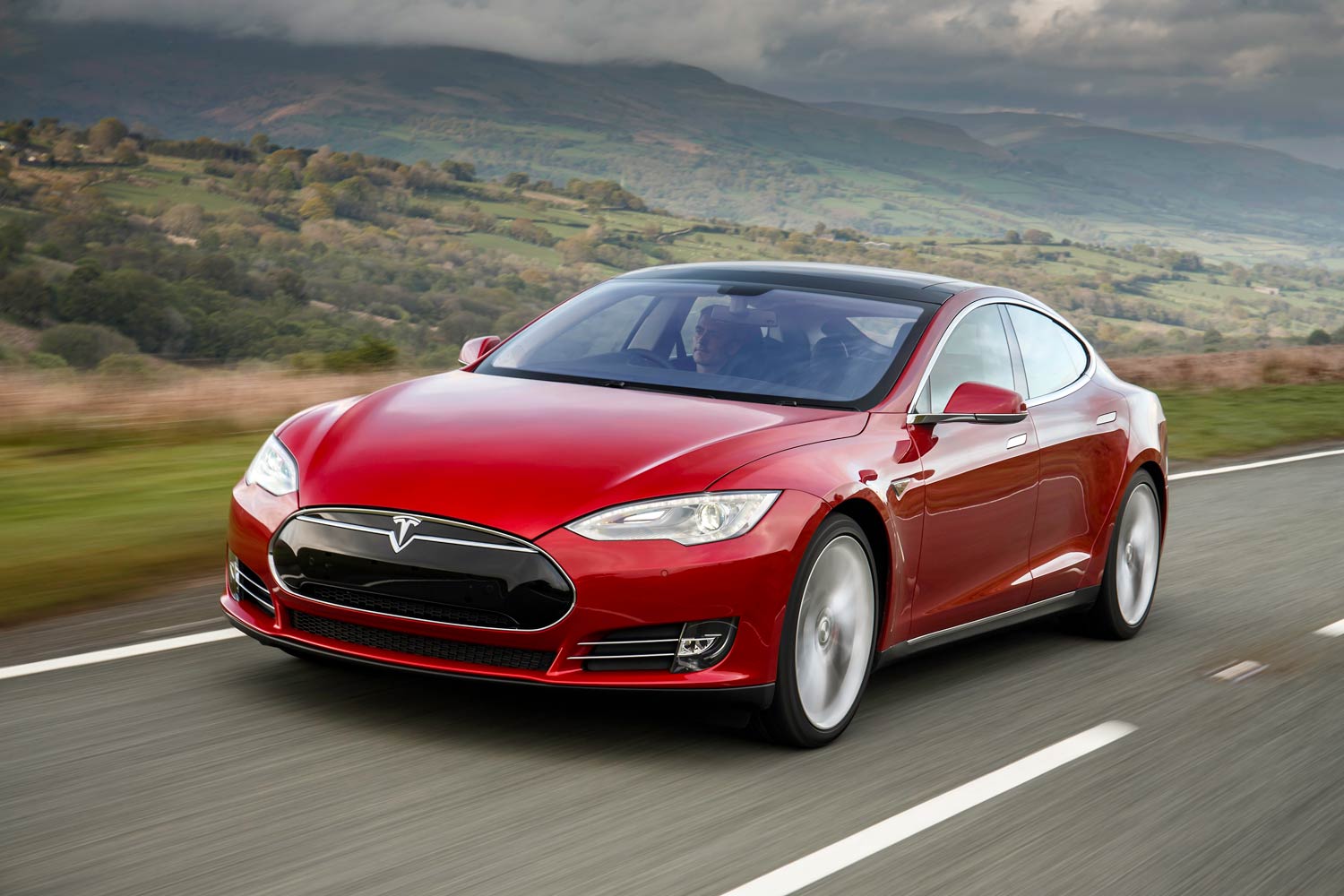 In the second part of Jon McKnight’s exclusive report for Luxurious Magazine, our resident Bon Viveur tells how Tesla has found the Holy Grail of emissions-free motoring and produced a car, the Model S, that’s nothing short of miraculous.

If you’ve ever owned an electric vehicle or, like me, merely read about them, you should prepare yourself to be absolutely astonished by the immeasurable gap between the Tesla Model S and anything else on the market.

For electric vehicles have always had an image problem.

When I was growing up in the Sixties, the only electric vehicles we’d heard of were milk floats. They trundled around the streets for a couple of hours and went up hills so slowly that you could often overtake them at walking pace. And then they went back to the depot where their heavy lead-acid batteries spent the rest of the day on charge. The only milk delivery vehicle ever associated with speed in the public imagination was owned and operated by a gentleman called Ernie who, according to Benny Hill, drove the fastest milk cart in the West – but, as my daughter pointed out, it was entirely non-electric and pulled instead by a horse called Trigger. So that would make it one horsepower, then. Other manufacturers have tried (and, I would argue, failed) to create an electric car that would finally free us from dependence on the oil companies – a laudable ambition made all the more urgent by climate change and the environmental pollution we motorists are causing. They’ve managed to make cars that go a short distance reasonably quickly, or a long distance extremely slowly – neither of which is of any practical use to those of us who don’t have a few hundred pints of milk to deliver to doorsteps on the way home. 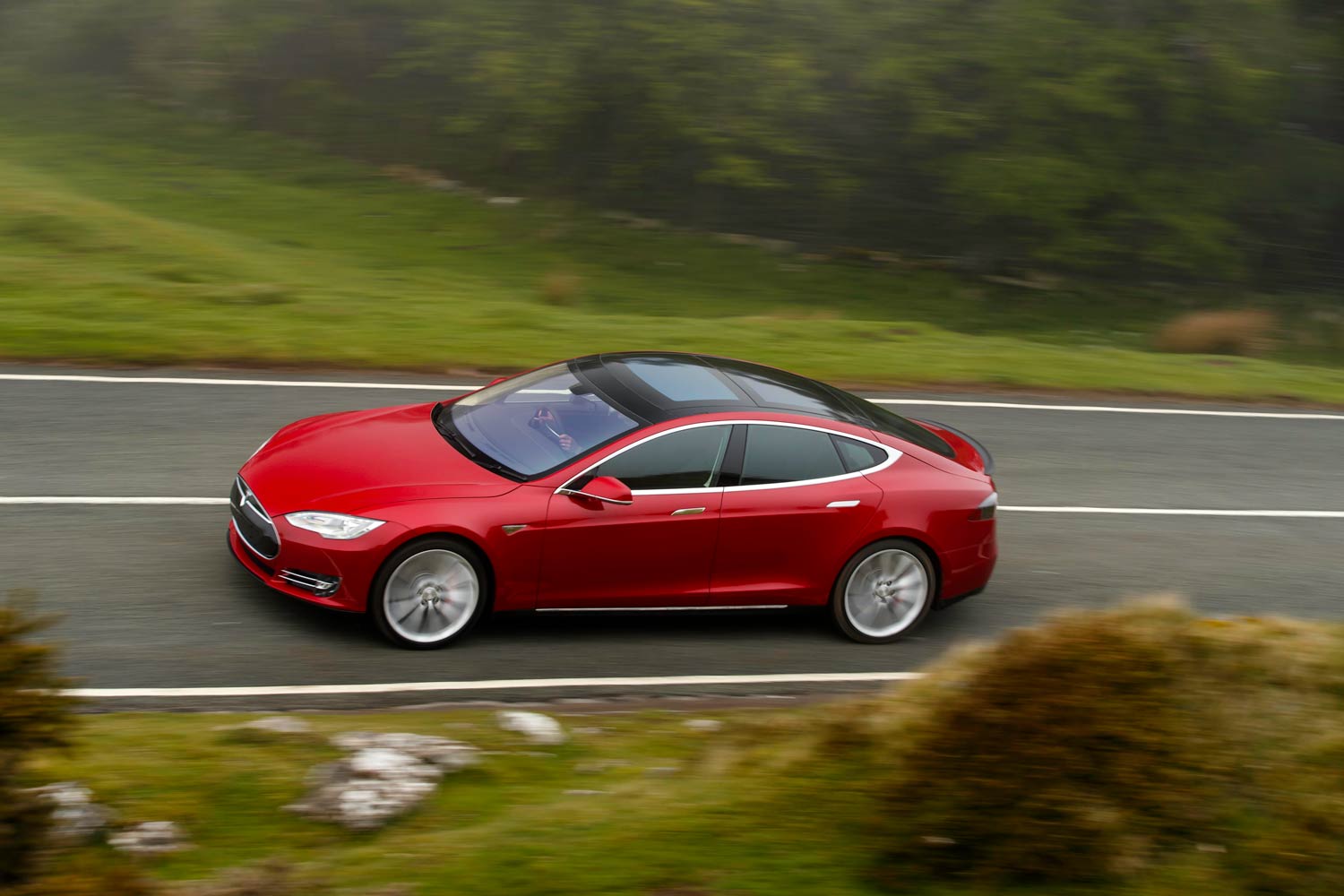 What we’ve always needed, if electric cars are to be taken seriously, is a car that can go hundreds of miles between charges and can do so at motorway speeds so we don’t get laughed at.

Forty years ago, when I was at school, we all dreamed of having a wristwatch TV, something we’d seen on Thunderbirds but seemed so technologically unlikely that we joked about a man staggering into a room with two heavy suitcases and inviting people to admire his new wristwatch television. One of its wealthier admirers offered him an absolute fortune for it, put the watch on his wrist, and was just about to leave when the vendor asked him: “Aren’t you going to take the suitcases, too?” Mystified, the hitherto delighted purchaser of the wristwatch TV replied: “No thanks. Why on Earth would I want those?”
“They’re the batteries,” said the vendor.

A joke, yes, but it foretold perfectly the problems besetting anyone hoping to make an electric car: batteries were too heavy, too expensive, and didn’t give anything like a useful range for everyday driving.

That’s why most of the attempted-electric cars on the market today are little more than jokes themselves, with pathetically short ranges, terrible performance, and, in some cases, looks that tell the world you’re wearing a hair-shirt as part of the sacrifice you’re making to save the planet. They might just suffice if you only drive to the local shops and back once a day, are happy to hitchhike if your ambition exceeds the car’s range, or you revel in your eccentricity and dream of living in Totnes. Backs of buses would be insulted if compared in looks to some of these far-from-electrifying electric cars, while hybrid vehicles coupling electric motors with conventional petrol engines merely chip away at the problem instead of solving it. All of which makes Elon Musk’s achievement so world-shatteringly amazing, and surely worthy of Nobel recognition. 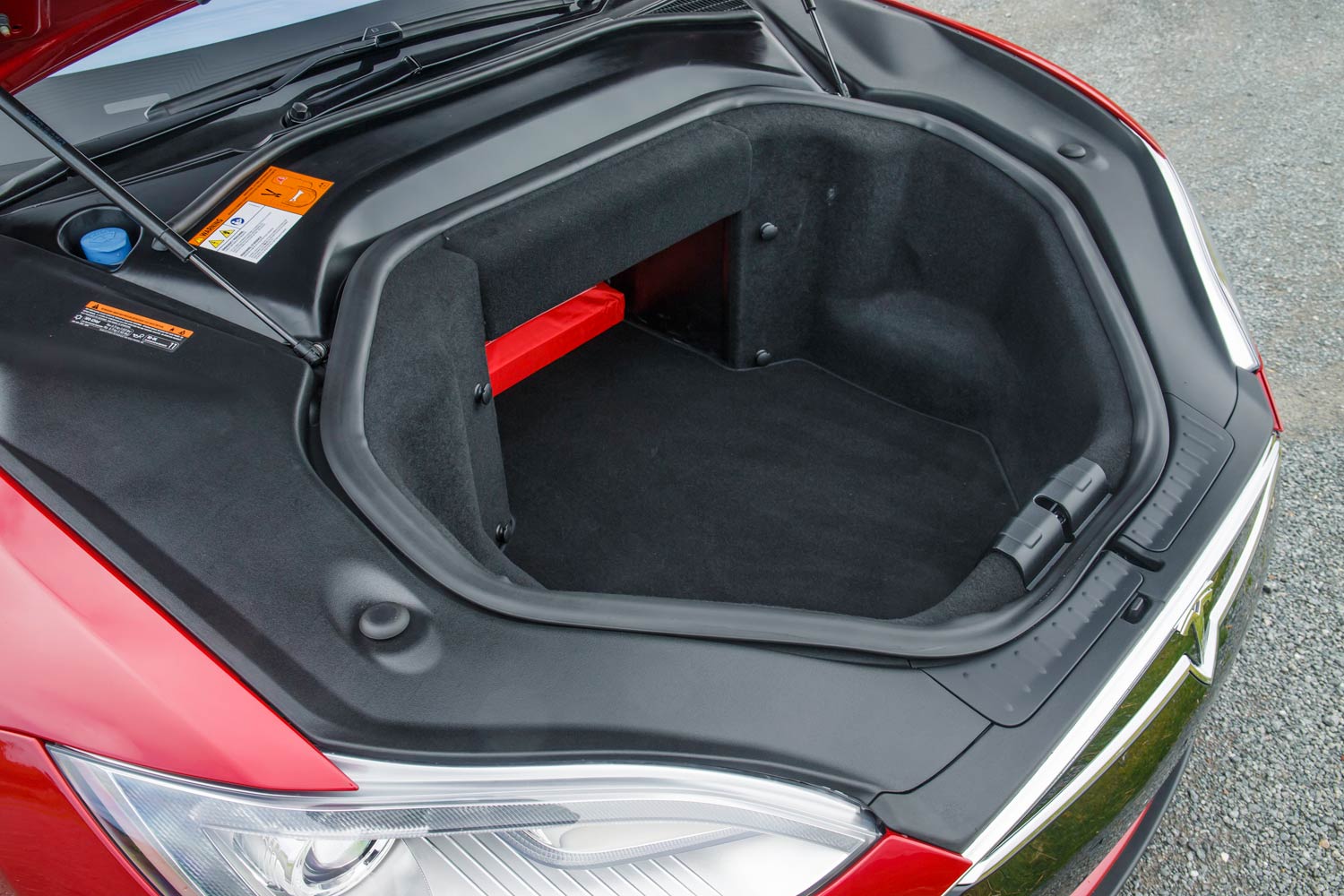 Thanks to the Lithium-Ion batteries it combines with technology derived from the work of alternating-current pioneer Nikola Tesla a century ago, the Tesla Model S is the first electric car that almost all of us could swap for our everyday vehicles without having to change our lifestyle one little bit. It plugs into the mains, can travel up to 310 miles on one charge (that’s not a misprint) and has blistering performance that would shock your granny. Its point-and-whoosh acceleration takes you from 0 to 60mph in 5.4 seconds and on, if you have a very long driveway or a nearby autobahn, to 140mph – twice the UK speed limit. The figures underplay the actual experience. Press the accelerator and the car pushes you back into your seat, leaving you feeling for all the world as if it has a direct connection to your adrenaline.

My friend, the celebrated English engine-tuner Alan Jeffery, experienced it for himself and couldn’t stop smiling – which is quite something for a man who’s been helping supercars out-perform their manufacturers’ intentions and limitations for decades. In what came as quite a surprise to me, he pointed out that the car doesn’t have gears, or a gearbox to keep them in, but simply relies on increasing or decreasing power to the electric motor. The result is an engine that responds instantly to every press of the accelerator, with no lag, none of the delay that even the most extraordinary of ordinary cars have as they change down through the gears to up the oomph. Having driven one for a week, I’ve come to the conclusion that there are now two types of cars: Tesla, and everything else.

I’m not sure if this happens on many people’s road-tests, but I had a near-Damascene moment when The Pope suddenly popped into my head and filled my thoughts while I was driving the Model S – a revelation that came, not on the road to the Syrian capital, thank God, but on the road to Bath in the West of England. It was probably the fault of BBC Radio 4. The Pope, it reported, had issued a rare Encyclical about climate change and the damage that we humans are continuing to do to the planet.

I pulled in at a lay-by, called up the story on the Tesla’s iPaddish screen, and discovered that The Pope was quite rightly pointing his finger at cars and our love of them as being one of the culprits.But despite poring over the entire text, as I’m sure we all did that day, I couldn’t find a single reference to Tesla. That was a surprise, as The Pope is renowned as a grass-roots spiritual leader, the Pontiff without the pomp, and he tends to give credit where it’s due. Surely, I thought, he’d want to praise Elon Musk and Tesla Motors for producing the first car that could actually make a significant enough difference to solve the car pollution problem overnight by eliminating the need for petrol and diesel at a stroke? 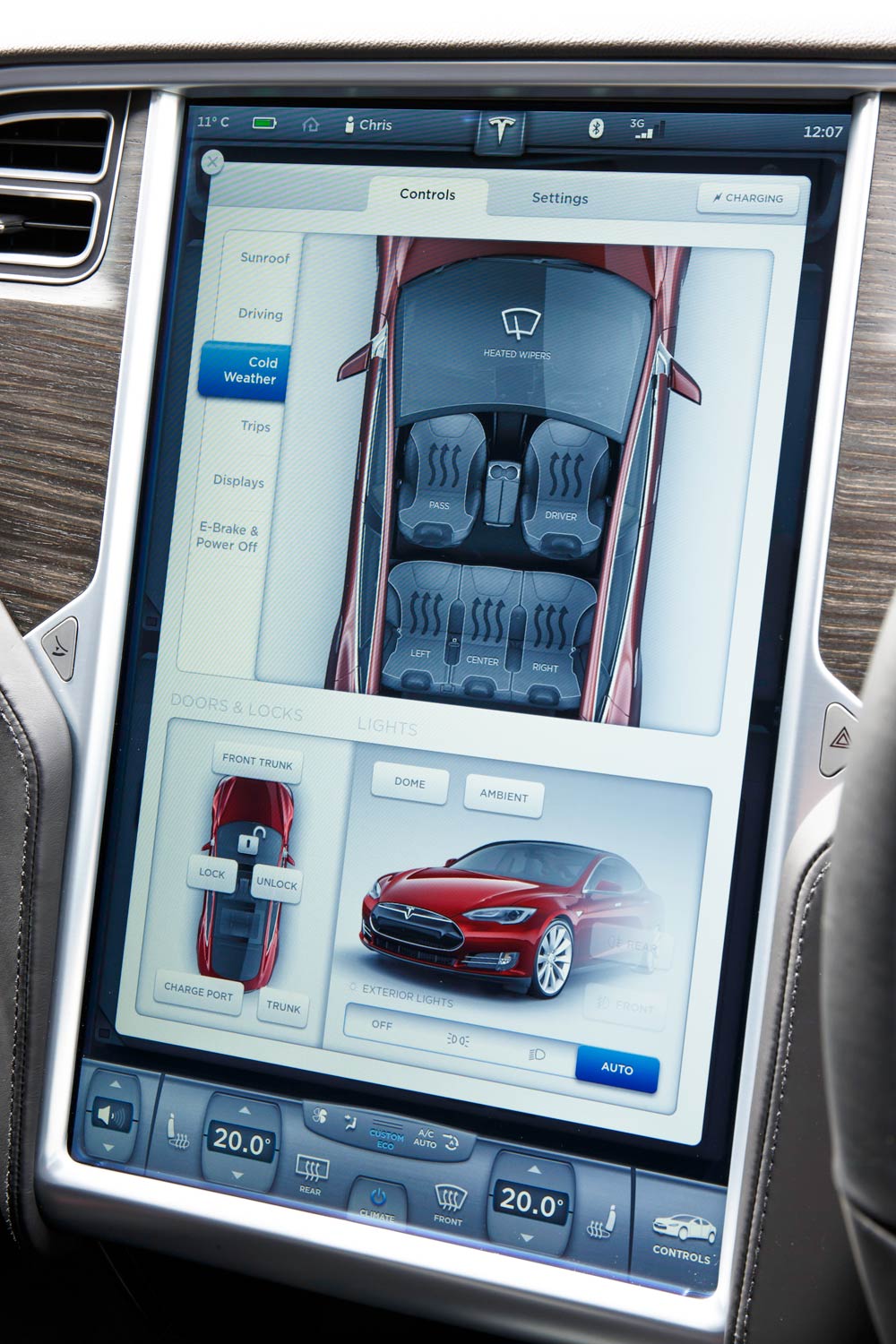 I contacted the Vatican press office to ask if The Pope was aware of Tesla and its potential to eradicate one of the biggest threats to the future of Mankind – the contribution to climate change and global warming made by the millions of vehicles that burn up petrol and diesel to make them go. Disappointingly, The Pope didn’t return my call – perhaps he was washing his hair or something – but if he did get my message I trust it won’t be long before His Holiness stands on the balcony at St Peter’s and announces an additional Beatitude on the lines of “Blessed are the Tesla drivers.”

Talking of silences, I still can’t believe quite how quiet the Tesla Model S is. Apart from the unavoidable rumble of tyre on road, it’s a veritable sea of tranquillity that explains why so many Tesla drivers are over the Moon. I’d intended to conduct a real-life test to establish whether you actually could hear a pin drop in the Tesla at 70mph – I still suspect you could – and it was so quiet at 30mph that when I played back some of my video rushes I discovered that the odd swishing noise I could hear was simply the steering wheel passing through my hands as I turned. It’s not a noise I’ve ever been aware of before, probably because I’ve never been in a car so quiet that you could hear sounds like that.

But back to the forgotten planet.

Very few of us need to drive more than 200 miles without a 20-minute break, which means we could stop for a coffee, plug in the Tesla at a Supercharger (it’s free!), and be ready to drive another 200 miles as soon as we’ve finished our pain aux raisins. We’d be able to travel at motorway (or freeway) speeds, too, or drive round our home towns all day without having to think about recharging the Tesla until we plugged it in overnight.

And that’s what makes the Tesla Model S not just a game-changer, but a planet-changer.