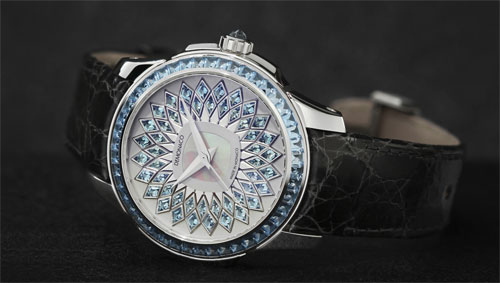 The Idea
The La Sirene watch is a piece that celebrates their first entry in the women’s high end watch jewelry and which is named and inspired by Mrs Charlene Wittstock in honor of her marriage to HSH Prince Albert II of Monaco.

The inspiration
For the design of the the La Sirene watch dial they have used The King Protea (Protea cynaroides), the national flower of South Africa – home country of Charlene. It is a distinctive symmetrical form with the flower head in the genus. Importantly, the flower has adapted to survive tough conditions, including wild fires, and as such symbolizes resilience. For the the La Sirene watch gemstones in the flower setting, they chose a light blue Topaz. This gemstone, together with its cousin aquamarine, is loved by women around the world for its fine blue shades which can complement almost any skin or eye color. Its light blue arouses feelings of sympathy, trust, harmony and friendship. Good feelings. Feelings which are based on mutuality and which prove their worth in lasting relationships. The blue is a divine, eternal color, because it is the color of the sky. Blue is also the color of water with its life-giving force, and importantly the Olympic swimming career of Charlene brought her in contact with her future husband!

The stone was introduced in high end jewelry in the 1920-30s in magnificent set of necklace, earrings, bracelet and brooch using light and dark topazes to create dramatic contrast and light reflection. The topaz is reputed to ward off melancholy, bring wisdom and prevent its wearer from straying from the path of virtue. All in all, what better combination to use to celebrate the beginning of a marriage! 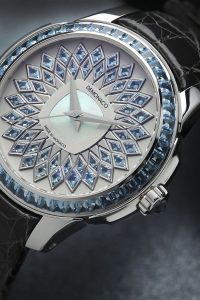 Ateliers De Monaco developed a 39 mm 18K gold case vs. the 43mm and 44mm cases in the Grand Tourbillon XP and the Minute Repeater. For the La Sirene watch movement, they created an accurate automatic movement with the use of contemporary materials like Silicium, and with the finishing you have come to expect from them, including the iconic deMonaco hand engraved rotor at the reverse side.

Ask anybody in the streets of Monaco and they will refer to Charlene is “La Sirene”, out of respect of her swimming achievement and some will add her deep azure-blue eyes.

The La Sirene watch will be produced in limited quantities, as it depends on Ateliers De Monaco ability to find the appropriate gem stones.
Price: Depending on the gem stones, from 80,000 EURO