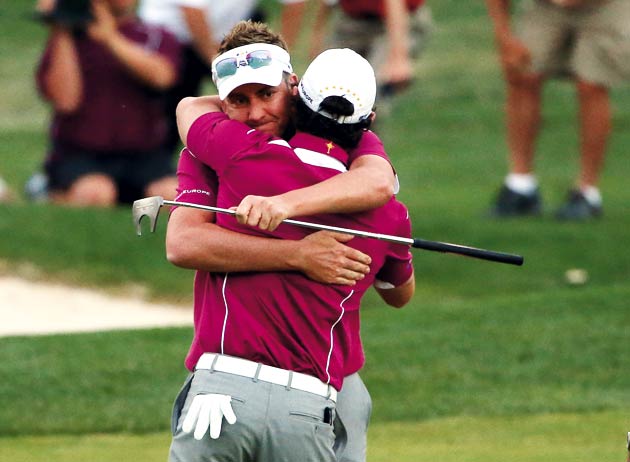 Throughout the competition, Team Europe, led by world number one Rory Mcllroy and composed of three other Audemars Piguet Ambassadors, Lee Westwood, Graeme McDowell, and Ian Poulter, fought hard to retain the trophy on European soil.

Inspired by Saturday night’s birdie by Rory Mcllroy on the 13th hole, his partner Ian Poulter finished the day with a run of five birdies. Led 10 points to 6 after two days the European Team came back in Sunday’s singles matches, mining 8 ½ points out of 12 possible. Ian Poulter who received a wild card to complete the team and always revels in match-play, was the best player of the competition.

“It was amazing to see the spirit in that team room on Saturday night,” Poulter said. “It just changed. We just felt that there was a little glimmer of hope.”

The worlds of golf and watchmaking are interlinked, sharing values such as passion, precision and rigorousness. Audemars Piguet is proud to have teamed up with an exceptional team of golfers passionate about their sport as well as perpetuating the common values through their outstanding professionalism and success in their field. They have mastered their sport and they embody Audemars Piguet’s philosophy, “To break the rules, you must first master them”.

Audemars Piguet had the pleasure to release the 2nd video of the Defining Moment Series. These videos give Brand Ambassadors the opportunity to talk about the defining moment in their career. In his video, Rory speaks about his first title in a Major, his victory at the US Open 2011.