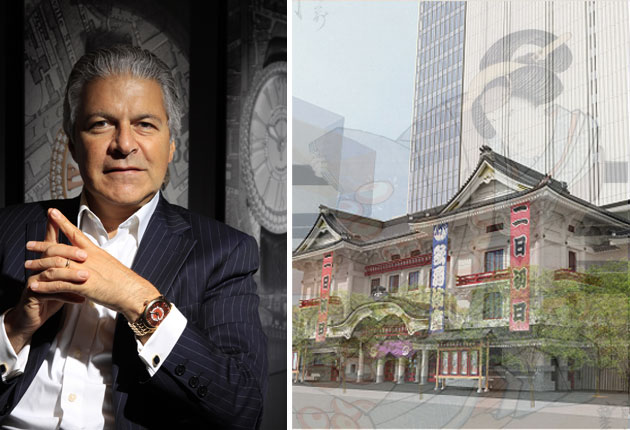 Backes & Strauss, the world’s oldest diamond company has announce they will be supporting Tokyo’s recently reconstructed Kabukiza theatre in Ginza.

2014 marks 225 years since the founding of Backes & Strauss – but the classical Japanese dance-drama of Kabuki dates back even further, 1603 to be exact when Izumo no Okuni and possibly a miko of Izumo Taisha, began to perform a new style of dance drama in the dry riverbeds of Kyoto. The thing that made Kabuki different was female performers playing the parts of both sexes, acting out comic roles centered around everyday life. Kabuki became so popular that it reached the attention of the Imperial court and before long other Kabuki troupes sprung up around the country culminating in dedicated Kabuki theatres.

Despite centuries of dynastic change, the burning down of theatres by an air strike and attempts to undermine the art form by the Occupation Forces after the WW II, Kabuki has survived and thrived. It is now the most popular of all traditional styles of Japanese drama and their star actors often take leading roles in television and film. To outsiders, however, the long, several-act plays based on history, dance or domestic life were often bewildering – until the widespread introduction of audio guides during the 1970s opened up the art form to the wider world. Now, Kabukiza theatre is equipped with a sophisticated LCD terminal which provides commentary, explanation and translation to help watchers understand the remarkable stories as they are played out on the elaborate Kabuki stage, which is designed for maximum dramatic effect with its ‘flower path’ walk way extending in to the audience and trap doors to enhance the element of surprise.

In its role as supporting the theatre’s management, Backes & Strauss will display information on the seat terminals about its own long history and the magnificent diamond watches it creates today – actual examples of which can be seen in two showcases prominently positioned within the Kabukiza.

Backes & Strauss CEO Vartkess Knadjian said: “It seems fitting that ‘Kabuki’ can be translated as ‘out of the ordinary,’ because that is also a description that can be applied to Backes & Strauss. We specialise in creating unique pieces, and we like to believe that the 225 years of experience we have accumulated in the diamond business gives us the edge when it comes to selecting, cutting, polishing and setting the world’s most precious stones in order to create watches which are as fascinating, as unusual and as spell-binding as the plays of the Kabuki. It is an honour to support the theatre, and we look forward to relishing the role and learning more about this remarkable art form.”