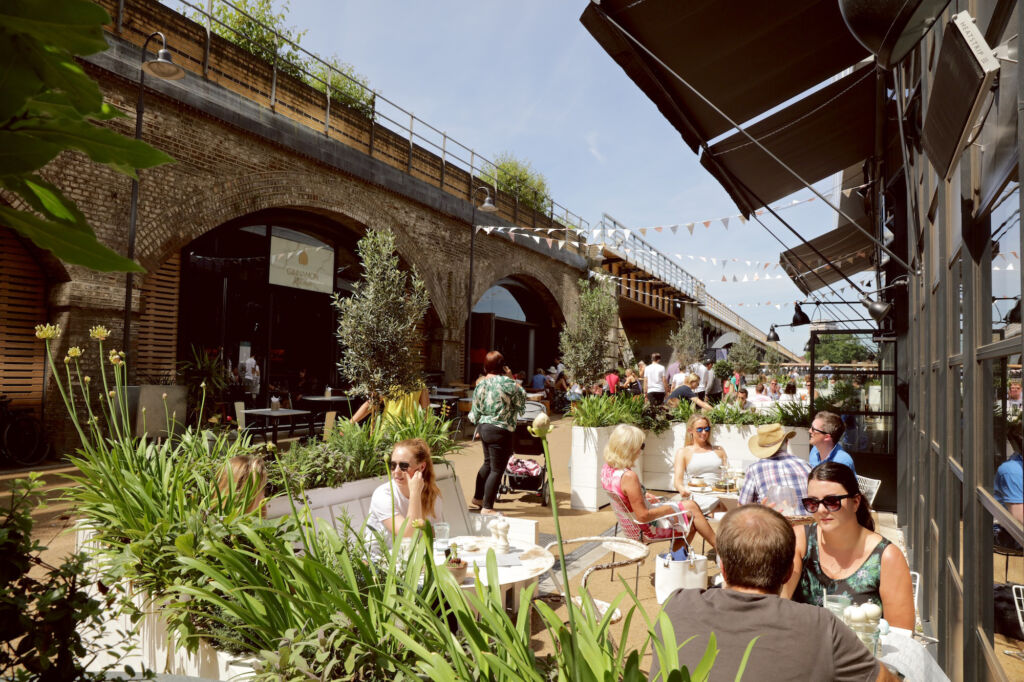 Luxurious Magazine’s Sabi Phagura heads to Battersea Power Station on a mission to invigorate her senses, find some fun and prove to herself that you can do all the things you would do on an overseas trip right here in the UK.

Staycations are where it is at right now. We may feel we’re forced to stay in the country due to the ongoing global pandemic and the uncertainty surrounding lifting lockdown restrictions, but that’s not a bad thing at all.

You see, there are loads of benefits such as the lower cost (mostly), less travelling involved and of course the chance to discover the hidden gems right in our backyard. And if you can take a trip and do all the things you usually would do on vacation, you really won’t be missing the flight bit. 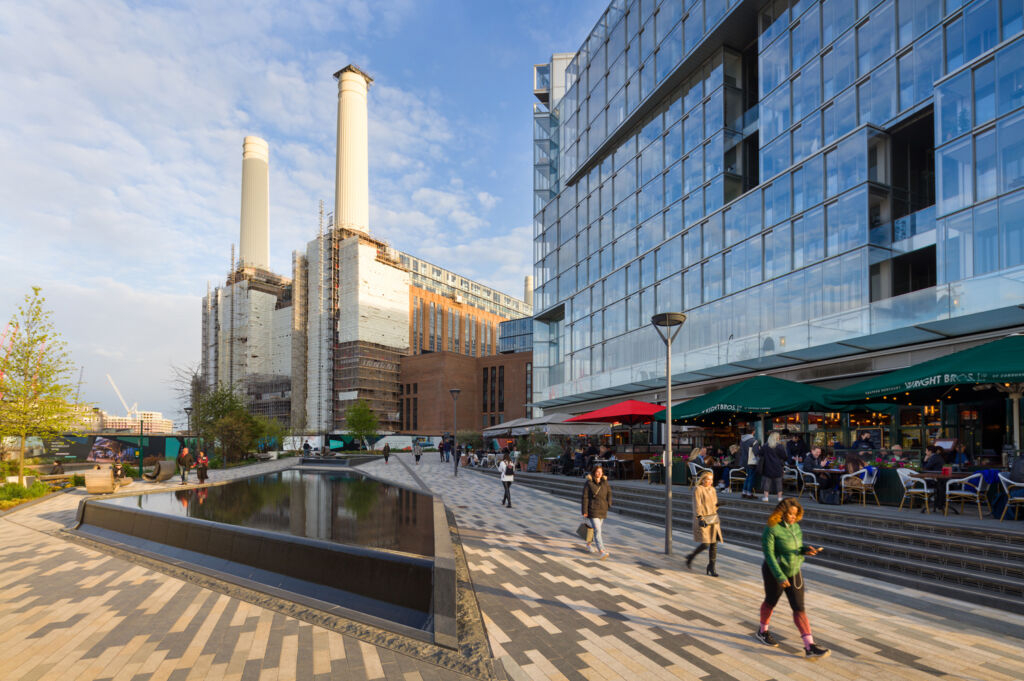 When planning a trip to London (or indeed any other city around the world), it’s the main tourist attractions most people flock to. While it’s good to tick these places off your list, you’ll get plenty more satisfaction exploring new, exciting areas of the city. For example, Battersea Power Station is not touted as a tourist hotspot (yet), but in recent years the area has been quietly transforming. There are several layers to developing the area, with the first chapter, Circus West Village, already open and a vibrant new riverside neighbourhood.

It is already welcoming over three million people on average a year thanks to an eclectic mix of bars, restaurants, shops, wellness and leisure facilities, a boutique cinema and theatre. To keep things interesting, there’s a whole host of events on offer throughout the year to look forward to as well.

Always preferring to start my day with some vigorous exercise, my first stop at Battersea Power Station was fitness studio Boom Cycle for a sweat session. It was a challenging workout, but the music, which was akin to tunes being played in a nightclub, lifted the groups’ spirits. A quick shower, a change of clothes, and I was ready to refuel. 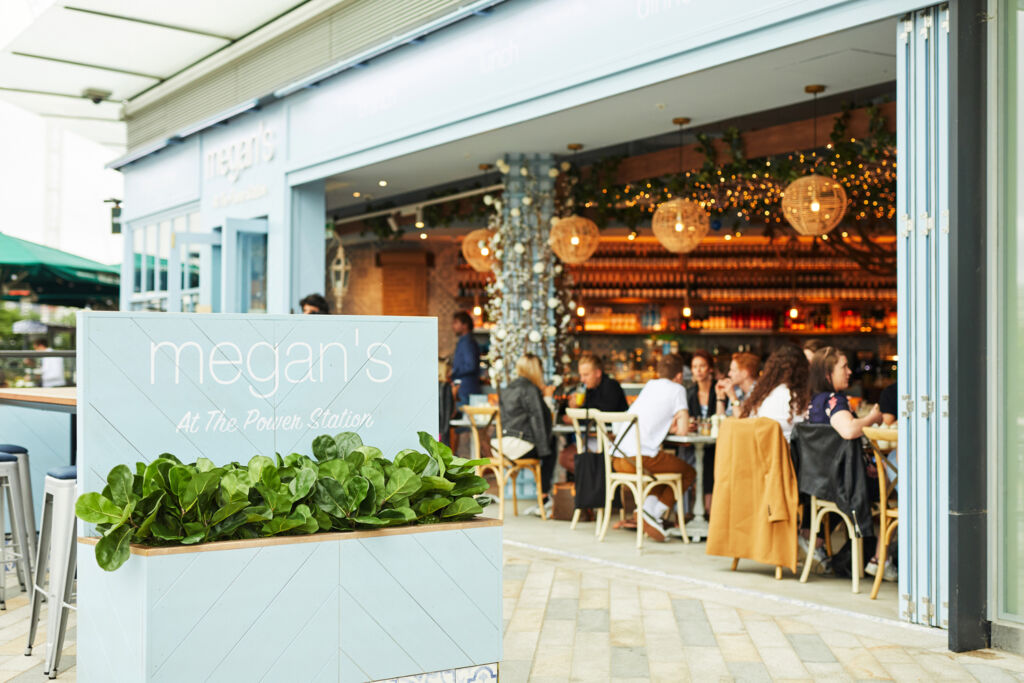 Having taken a sneak peek at the list online before my visit, I began my culinary tour from the Instagrammable-worthy Megan’s, which has also been voted one of the most romantic restaurants in London. With an abundance of macrame hanging from the ceiling and fairy light lit booths, it is simply a beautiful place to hang out in, and the food didn’t disappoint either.

Brunch is an all-day affair here with the Mediterranean inspired Shakshouka, Eggs Benedict, homemade granola, organic coffee and smoothies. It was the fuel I needed after the spin class. 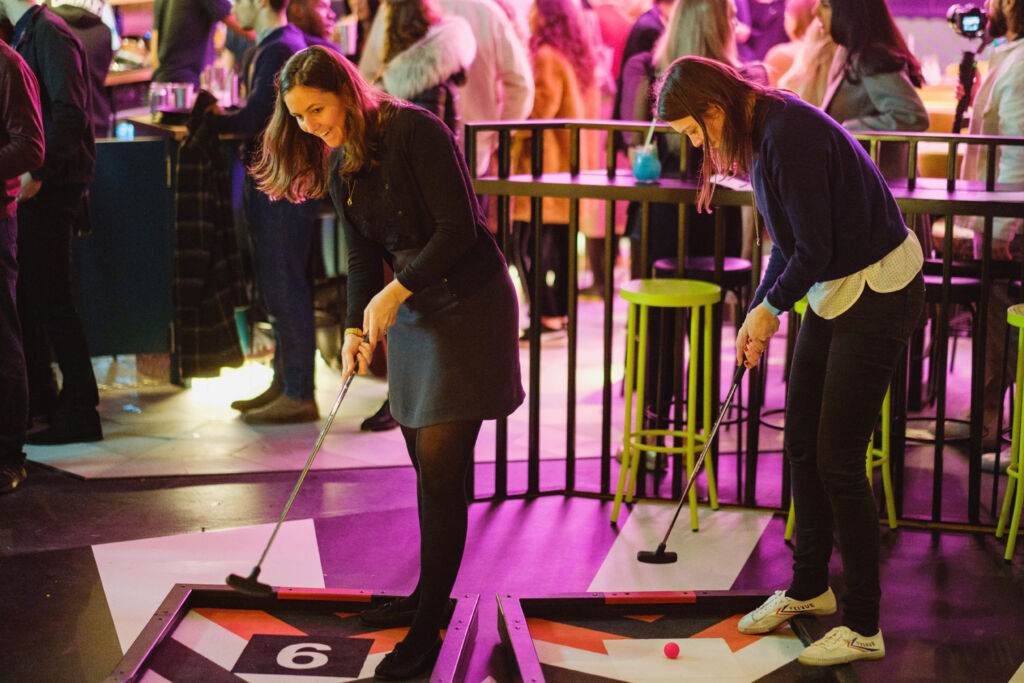 Mandy and I headed to Birdies for a spot of crazy golf for some amusement and an experiential escape. It is something I would most definitely get involved in abroad, and to be fair, as soon as we entered the activity-come-cocktail bar, it felt like I was.

The holiday vibe added to the atmosphere as Mandy and I immersed ourselves in honing our skills to conquer the nine-hole obstacle course. Each uniquely designed hole was a challenge on the senses, but it left us even more determined to putt with speed and accuracy in a bid to win. Did I win? Erm, let’s move on swiftly.

We took the weight off our feet with a trip to the boutique Archlight Cinema just a few doors down. The cinema boasts super-comfy reclining seats accompanied by individual tables – designed to be the perfect size for a bottle of wine, cocktail or some sweet treats from the Sweet Shop in Cinema 2 – and is the ultimate film lover’s experience.

Whether you prefer watching the latest released films or a classic film, you can do so in style here thanks to the cinema’s state-of-the-art Dolby Atmos 3D surround sound and laser projection delivering crystal clear picture quality.

Talking of films, Battersea Power Station has lent itself as a backdrop to several silver screen classics over the years, including Alfred Hitchcock’s Sabotage, Monty Python’s The Meaning of Life, and most recently, Batman’s The Dark Knight. 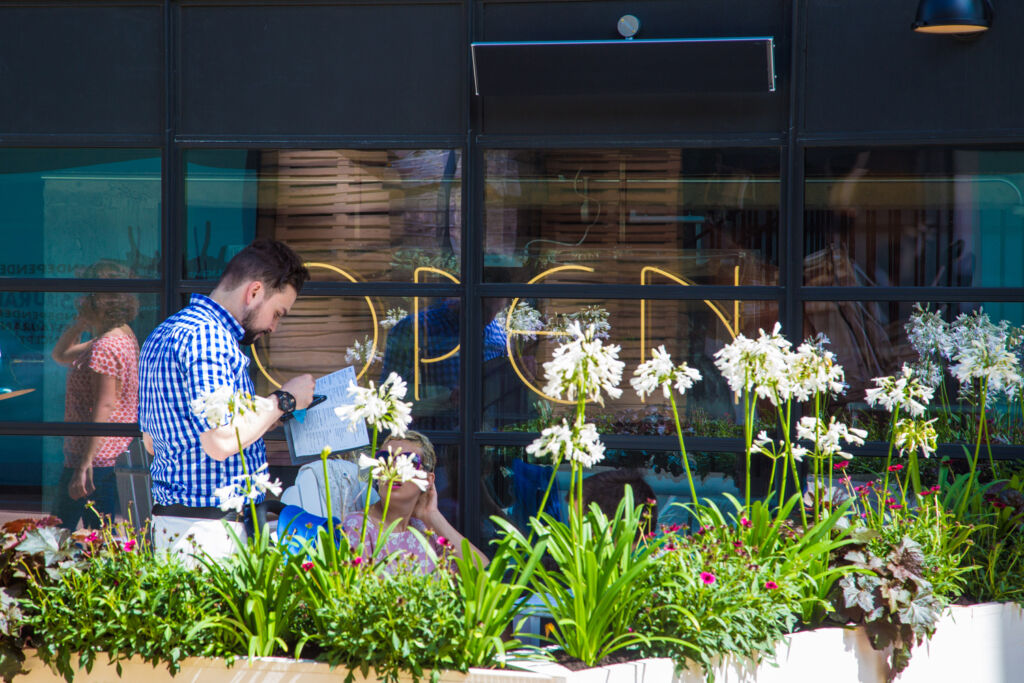 We headed to No.29 Power Station West for a drink and nibbles before dinner to’ wake up’ from the darkened cinema room. They have a great outdoor terrace offering views across the River Thames. We were drawn to this place because of its sustainability ethos.

The menu is scratch-cooked, and they source the best quality, most sustainable ingredients from local suppliers. Expect to find perfectly good ‘wonky’ vegetables on your plate – which would have otherwise been discarded – as part of their commitment to reducing food waste. Drinks-wise, you’ll find everything from the morning coffee to a nightcap and everything in between.

The interiors of this all-day dining and drinking spot have been well thought out. Behind Crittall doors, luxury turquoise velvet booths and purple sofas dotted around the bar downstairs, it’s easy to mull away hours catching up with friends and family. 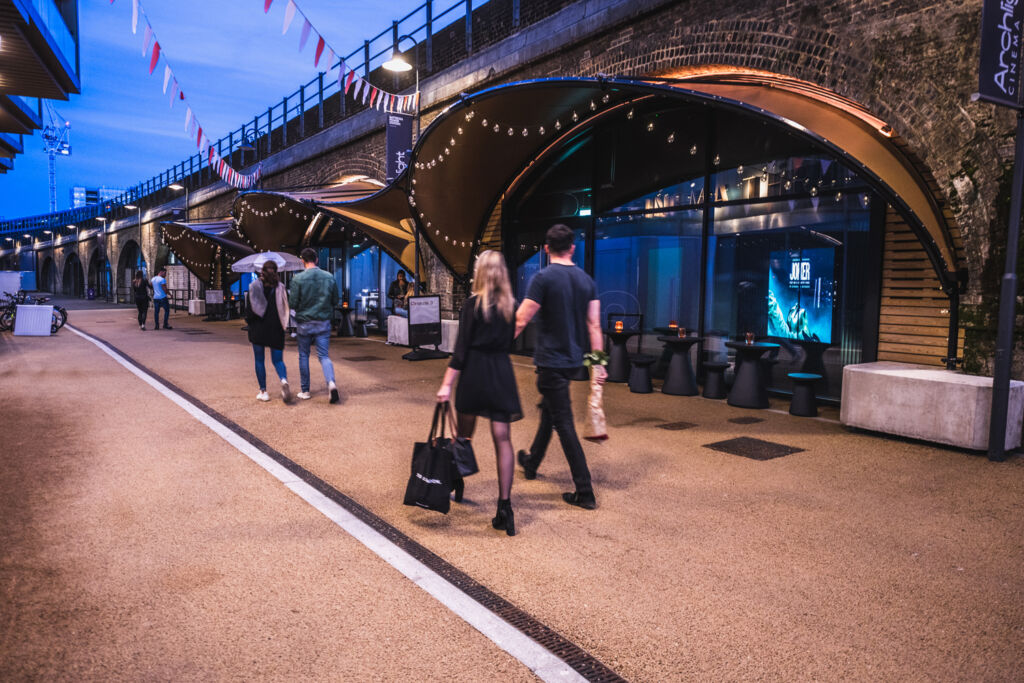 From No. 29 Power Station West, we moved onto our final stop for the day, Tapas Brindisa Battersea. To be honest, we were already quite full from the copious food consumed throughout the day, but eating is what you do on holiday, right? We just had to have our fill of delicious tapas before calling it a night, and the menu at Tapas Brindisa didn’t disappoint.

With small plates on the menu such as potato ‘croquetas’, Iberico ham, Padron peppers, grilled octopus and ‘tortilla Española’, it’s the perfect place to experience authentic Spanish fare without having to jump on a flight.

With so much to do already, it’s hard to imagine that more development is on the way. 2021 is set to be the most exciting year yet in the regeneration of Battersea Power Station, which is being transformed into a new mixed-use neighbourhood offering a community of homes, shops, cafes, offices and over 19 acres of public space.

The first residents to ever live inside the Grade II* listed Power Station have recently moved in, and the retail and office occupiers set to open their doors in the building will begin fitting out their spaces later this year ahead of the public opening in 2022. 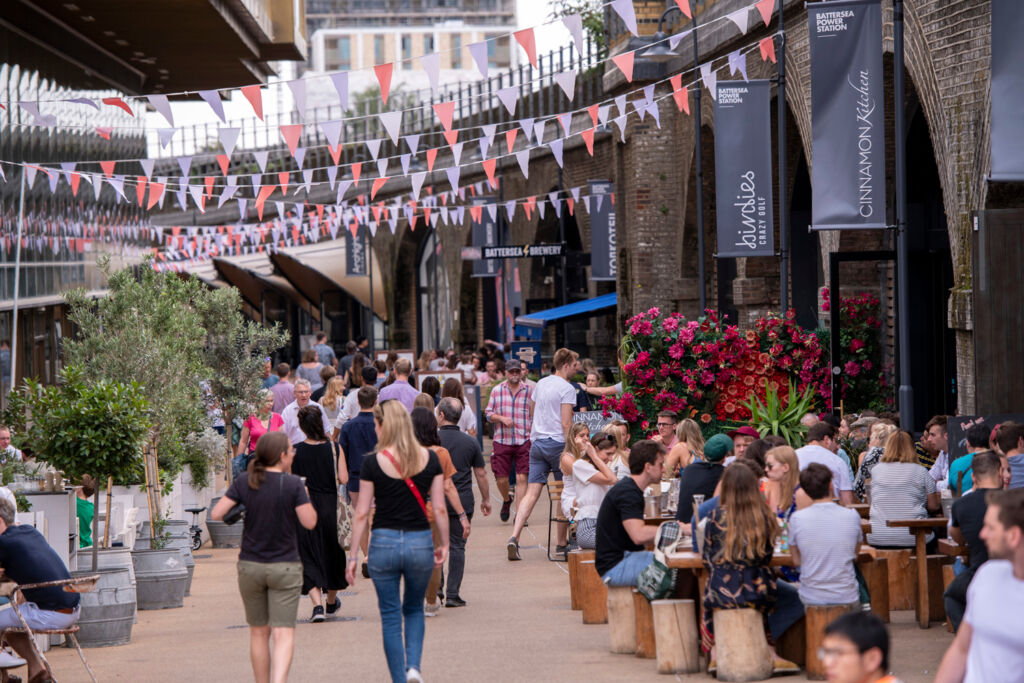 Once open, the Power Station will house over 100 shops, restaurants and cafes, a 1,400-person capacity events venue, a unique chimney lift experience offering 360-degree panoramic views of London’s skyline from a height of 109m, new office space, 500,000 sq. ft. of which will be Apple’s new London campus and 254 new residential apartments.

The same year, Electric Boulevard, the third phase of the development, will also open to the public. Two of the world’s most renowned architectural practices, Gehry Partners and Foster + Partners, have designed this new high street, which will feature shops, restaurants, a community hub, a medical centre, a new park and a 164 room hotel overlooking the Power Station itself. Electric Boulevard will also link the development to a new Zone 1 Northern Line London Underground station set to open this autumn. 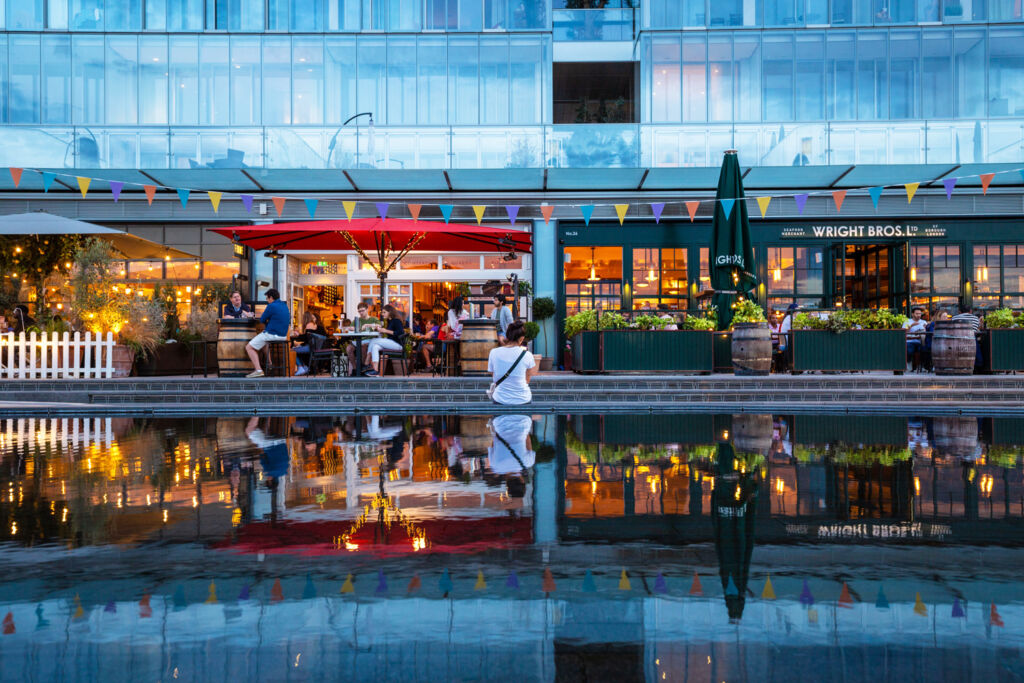 A staycation is the perfect option in the current climate and is even being encouraged by the Government, so there’s no better time for a holiday in the UK. With so much to do at Battersea Power Station, it will keep you amused on numerous day trips.

Battersea Power Station – Where and how?

Travelling to this new London neighbourhood couldn’t be easier with the Uber Boat by Thames Clippers River Bus Services to Battersea Power Station pier – only a 15-minute journey from Embankment, 20 minutes from Blackfriars, 30 minutes from Putney and 40 minutes from Canary Wharf. It is also easily accessible by bus, bike, car, train and tube. For more information, visit www.batterseapowerstation.co.uk.

The images used in this feature were taken prior to the pandemic outbreak. We advise anyone who visits Battersea Power Station to adhere to health and safety rules, wear masks and maintain adequate social distancing.