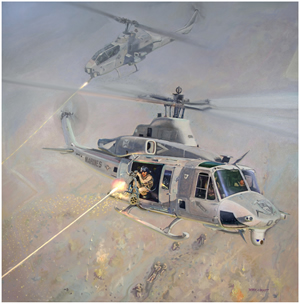 “On behalf of the 11,000 men and women of Bell Helicopter, I am proud to dedicate this painting of our ‘heroes of aviation’ to the Marines,” said John L. Garrison, CEO and president of Bell Helicopter. “You may refuse to think of yourself as a hero – but I think the Marines you helped save in Afghanistan might disagree.”

The painting was unveiled at the Bell Helicopter exhibit during the annual Marine Corps Aviation Association (MCAA) 2012 Symposium and Reunion and the Marine Aviation Centennial Celebration at the Gaylord National Hotel, National Harbor, Md., by John Garrison. The portrait will reside within the 3D Marine Aircraft Wing (3d MAW), headquartered in San Diego, Calif. Receiving the painting in Washington D.C. was Major General Andrew W. O’Donnell, JR., Commanding General of 3d MAW and Capt. Casey Blasingame, UH-1Y Yankee helicopter pilot, and the recipient of the Air Medal for actions depicted in the painting.

The painting pays tribute to Marine Capt. Casey “Porch” Blasingame and his unit who were called to help rescue a group of U.S. Marines pinned down by the Taliban in Afghanistan in November 2010. Marines on the ground were returning to their patrol base carrying two casualties when they were ambushed by the enemy.

Capt. Blasingame and his group made several gun runs, engaging the enemy at close range and causing the enemy fire to cease. This brief cessation of fire allowed the two patrols to quickly maneuver out of harm’s way and continue the evacuation of the wounded. The helicopters remained overhead providing watch for the movement as the patrol returned to their base.

The Marine Corps post-mission assessment reports described the engagement as “pure chaos on the ground” and something you would “only see in movies.” These reports highlighted the heroic efforts of Capt. Blasingame and aircrews of HMLA- 169 in support of their patrol and ground forces. Capt. Blasingame’s unit provided tactical air strikes that facilitated increased freedom of movement for Marines on the ground and aided in the destruction or neutralization of many Taliban fighters.

“I am humbled and touched by the attention that I have been given, “said Capt. Casey Blasingame. “This honor rightfully belongs to the Marines who were on the ground that day in Afghanistan and to the crews who work tirelessly in the air and behind the scenes. It is a total Marine effort from aviators, to maintainers, to supply and with our industry partners; everyone is part of this team.”

The first Bell Helicopter Heroes of Aviation painting was of an OH-58 “Kiowa Warrior.” It was unveiled at a ceremony at the April 2011 Army Aviation Association of America (AAAA) professional forum and exposition, held in Nashville, Tenn. Both works of art were painted by world renowned combat artist, Patrick Haskett.