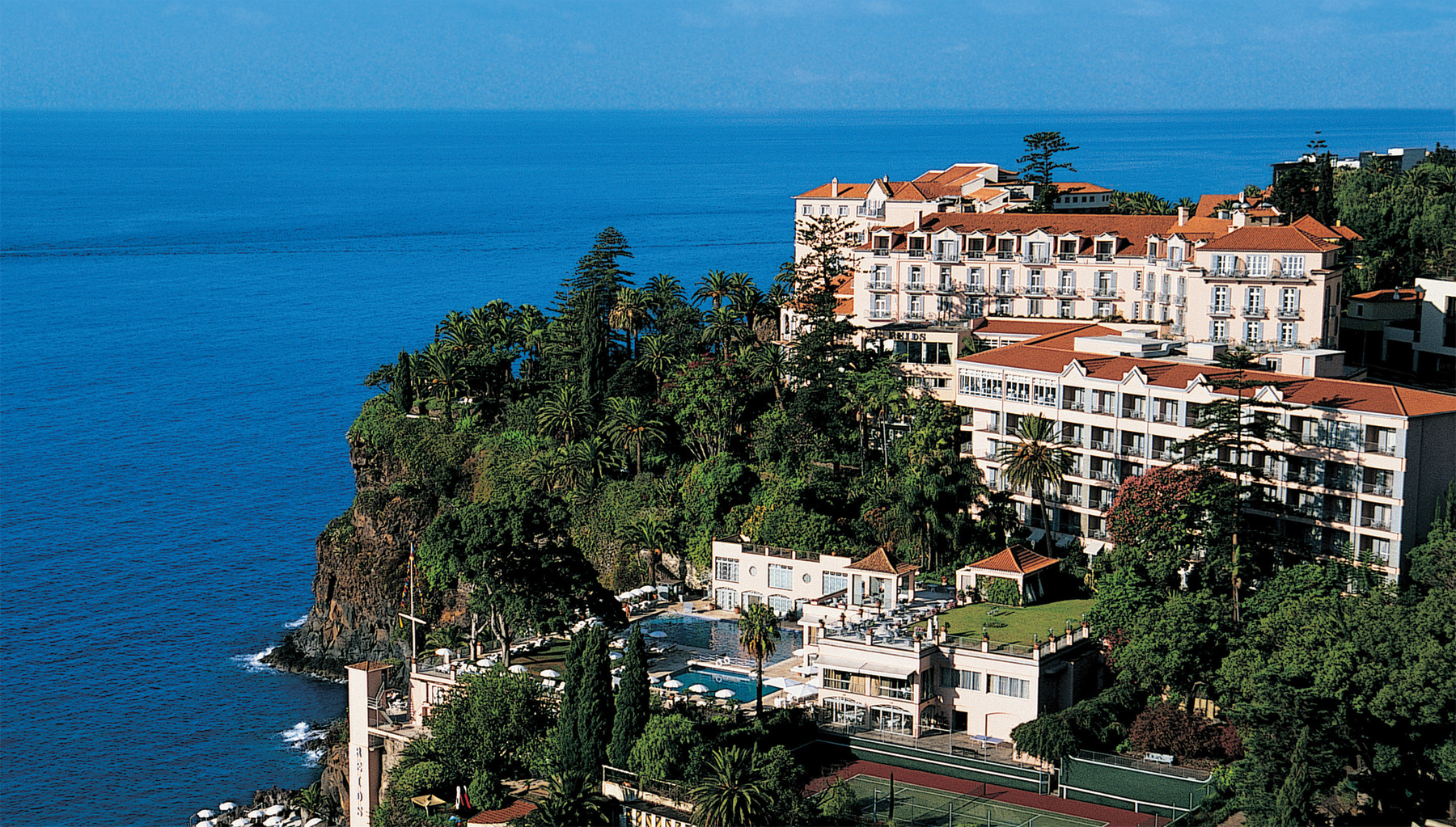 Madeira offers far more than desert wine, cake and flowers, but there are certainly plenty of all three in abundance. I arrive on the maiden British Airways flight (the airline has returned to the island after a 7 year hiatus) to be greeted with a water cannon salute, as a cute little Lego-style firetruck douses the windows of the plane. In the arrivals hall there’s folk dancing, a suitcase-shaped cake and a glamorous welcoming committee, headed by Madeira’s Tourism Minister, who resembles Peter Sellers at the height of his mid-sixties suave.

Airports are seldom truly welcoming spaces, but at Funchal’s the landing strip runs parallel with the Atlantic Ocean and you can even see the sandy, sister island of Porto Santo in the hazy distance. 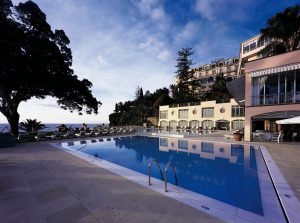 Reid’s Palace is the sort of hotel designed to give you few incentives to leave, thanks to a dramatic promontory setting with views of the headlands and harbour, where the cruise ships disgorge day-trippers. There’s a lush maze of sloping tropical gardens to explore, thick with bottlebrush plants and rare jade orchids, while a cluster of pools arranged on multiple levels (the ground floor reception is actually floor 6), offer plenty of lounging privacy, as the waters lap the jagged rocks close below.

Like much of Madeira, there’s a strong British heritage in evidence. Reid’s owes its name to Scot William Reid, the son of a Kilmarnock farmer who arrived on the island in 1836 on doctor’s advice, with the princely sum of £5 to his name.

Future owners included the enterprising Blandy family, whose name is synonymous with the fine brand of Madeira wine you’ll likely find in a dangerously generous carafe of in your room, accompanied by a hefty trough of cake.

Winston Churchill was an occasional guest and received a standing ovation when he stayed in 1951. You can easily picture him on the Tea Terrace, under palm shades, sipping a large G & T, or perhaps a cool glass of the local iced Madeira wine aperitif.

Outside there’s a fleet of vintage Chevrolets and Rolls Royces, which are available for hire (or for 2 hour chauffeur-driven tours) to explore the island, remnants from the previous weekend’s Classic Auto Show.

Funchal & Monte
But if you can steal yourself away from Reid’s charms, you’re unlikely to regret exploring this distinctive slice of volcanic paradise. By May the island is in full flower, with jacaranda scenting the air, wild orchids sprouting from the roadside and every corner alive with vividly painted blooms. 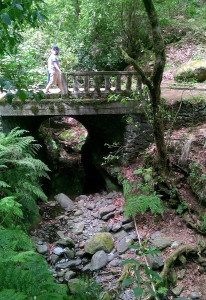 Closer to Africa than Europe, Madeira has a mild, subtropical climate and on the serene cable car ride over Funchal’s terracotta roofs I notice that every strip of land is groaning with banana plants and other vegetation.

The short trip shows us just how mountainous the island is, delivering us to Monte, home to a charming Spanish-style church, terrace cafes, and a museum with botanical gardens.

What strikes you about Madeira is how adrift it often feels from the rest of Europe. One example of how they roll here are the wicker toboggans used to navigate the steep 1km path down to Funchal. The ingeniously quirky transportation is manned by a pair of boater-hatted men who steer it downhill with ropes and pulleys.

Back down in Funchal’s Old Town, you may want to check out statue of the island’s most famous son from modern times, Cristiano Ronaldo (and marvel at how little resemblance it bears to the Real Madrid striker!) before strolling through the narrow, undulating alley of Rua de Santa Maria and take in the 100 painted doors featured in the Art of Open Doors project. These range from sly Banksyesque surveillance statements to hyper-real landscapes and homages to Degas. The street itself has traces of Lisbon’s Bairro Alto about it, with the doors opening to a selection of art galleries, shops, bars and restaurants.

Outside Lavradores Market, a graceful Art Deco building designed by Edmundo Tavares, we watch an energetic, al fresco Zumba class while traders line up unfamiliar varieties of bananas and dapper old timers congregate by the water fountains, seemingly plucked from the roster of the Characterful Locals Extras Agency. Inside the fishmarket, we pass rows of huge, oily black espada fish and temptingly meaty tuna steaks big enough to use as a pillow. 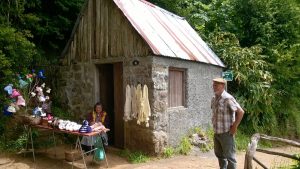 A jeep safari provides a handy way to explore the island in all its craggy splendour, cutting through the spongy forest floor past towering Spanish moss trees. We take a mini-hike along the route of one of the levades near Ribeiro Frio, a network of 15th century waterways used for irrigation. We pass A-framed craft huts selling hand-knitted woolly hats, despite the balmy temperatures, before stopping at a viewpoint looking out onto overlapping baize green valleys, where we’re joined by inquisitive clutch of Madeira Chaffinches and rust-hued geckos trying to look inconspicuous. Our walk is a gentle one, but some hardy locals use the 1,400 km long network of levades as makeshift marathon trails, even jogging through the night for up to 20 miles at a time.

Lunch at Quinta do Furao an old vineyard (named after the nickname of one of its earliest owners, ‘the ferret’) in Santiago on the northern coast delivers morsels, such as crispy deep-fried pink ravioli with veal, pesto and sweet potato puree, which are so colourful they somehow manage to vie with the balcony’s panoramic views of the volcanic coastline, jutting out like some colossal, foliage-clad sleeping dinosaur. Desert is a chocolate bombe, complete with smoky grey lava crystals, which pays a playful tribute to the eye-popping landscape enveloping us. 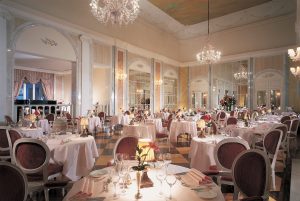 As we’re served a succession of appetising plates festooned with gold leaf and edible flowers, I’m struck by what a perfect wedding venue the hotel would make, but apparently the locals like to party long into the wee small hours, making this a rare occurrence.

Still I left the island with the distinct impression that Madeira would scrub up to whatever celebratory occasion you’d care to throw at it. Just go easy on the wine – and the cake!

Prices for a stay at Belmond Reid’s Palace start from 295 Euro (£213) per night, including taxes, in a Charming Room with breakfast. Call the Belmond UK Reservations team on 0845 077 2222 or visit BELMOND.COM.