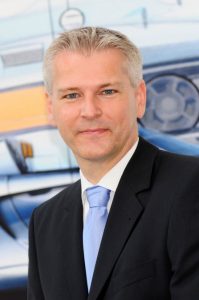 Bentley Motors has announced the appointment of Stefan Büscher as Marketing and Product Director.

Stefan reports directly to Alasdair Stewart, Member of the Board for Sales and Marketing, at Bentley’s world-wide headquarters in Crewe, England.

Stefan Büscher starts this newly created role on 1st January 2012 and is responsible for all marketing and product activities, including brand strategy and development, digital marketing and CRM, live marketing, event management and the Bentley Collection. A German native, Stefan Büscher was educated in France and the UK and has established an international career in marketing. After an initial spell within sales and marketing for Dresdner Bank, Stefan has pursued a career within the automotive industry and since 1997 has been with the Dr. Ing. h.c. Porsche AG in Stuttgart, latterly as the General Manager for Marketing Communications. During this time Stefan was instrumental in the creation of a number of film and ground-breaking digital campaigns which received numerous accolades and awards culminating in the team winning the “German Marketing Award” in 2004.

“Stefan is a terrific addition to the Bentley team.  With the recent launch of the new Continental V8 and a strong new model pipeline, it is an exciting and challenging time for the business.  I am convinced that Stefan’s experience and vision will help us broaden awareness of Bentley and ultimately strengthen our market position world-wide.”

“Bentley is a fantastic brand so it was incredibly flattering to be asked to join what is already a very successful team.  I have been amazed by the passion and commitment of everyone involved with the Bentley marque. My immediate challenge is to see how we can communicate that enthusiasm and passion to new customers. I look forward to working with the team and taking Bentley to the next stage in its success story.”