Bentley Motors unfolds its new 2012 Bentley Continental GTC at the Los Angeles Convention Center this week in its first public unveiling to the North American market.

The Bentley stand will also show the next generation of mobile connectivity with the Mulsanne Executive Interior Concept – a new multimedia experience designed for executives inside the luxurious, hand-crafted cabin of the company’s flagship Mulsanne. 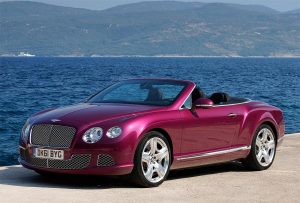 “Los Angeles is the ideal location for Bentley to launch the luxurious and powerful GTC convertible,” said Alasdair Stewart, Bentley’s Member of the Board for Sales and Marketing.  “Southern California remains the most successful market for Bentley in the US, and the US remains the largest market in the world for the Company.  New model introductions, such as the GTC convertible – which will reach US customers later this year – and the new GT coupe – which went on sale in the spring – have helped Bentley global sales grow by a third in 2011.”

Bentley sales to the end of October increased 33% to 5,379 putting the Company on track to reach its target of 7000 cars sold this year.  US sales are in line with this increase, with the new Continental GT coupe accounting for 37% of all sales in the market – despite reaching showrooms only in April.  The US market accounts for roughly half the world’s Bentley convertible sales making it the number one market for the new 2012 Bentley Continental GTC.  Bentley’s exciting new product line up, together with a dealer network now expanded to 48 with the opening of Bentley Nashville, means that there is a great deal of confidence for 2012.

This confidence is bolstered by the ongoing high demand for Bentleys in other markets. China has continued its unprecedented sales growth, up nearly 90% over 2010; Sales in Germany are up by around 60% and in the United Kingdom Bentley’s market share in the luxury segment is now more than 25%, making it the clear market leader. 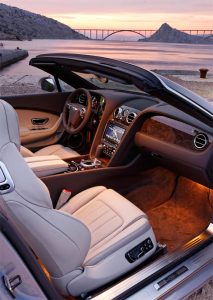 All eyes will, however, be on the new 2012 Bentley Continental GTC. The Breeze-colored drophead GTC debuting at the LA Auto Show features a custom, coach-built appearance and crisper lines, thanks to aluminium superformed front wings, and, in the rear, the double-horseshoe design first seen on Bentley’s flagship Mulsanne.

Below the surface of the 2012 Bentley Continental GTC

The 2012 Bentley Continental GTC interior features luxurious wood and leather craftsmanship, for which Bentley is renowned, alongside class-leading technology, such as eight-inch touch-screen infotainment system, and zip-code entry navigation, all supported by a 30-gigabyte hard drive.  To ensure drivers and passengers alike enjoy an extended top-down driving season, the 2012 Bentley Continental GTC now features neck warmers in the rear headrests of its cobra-head designed slim-line seats.  With the top up, acoustics have improved thanks to the addition of acoustically-sensitive undersheet, wheel liners, front and side glass and a three-layer roof with a rubber-film middle layer.