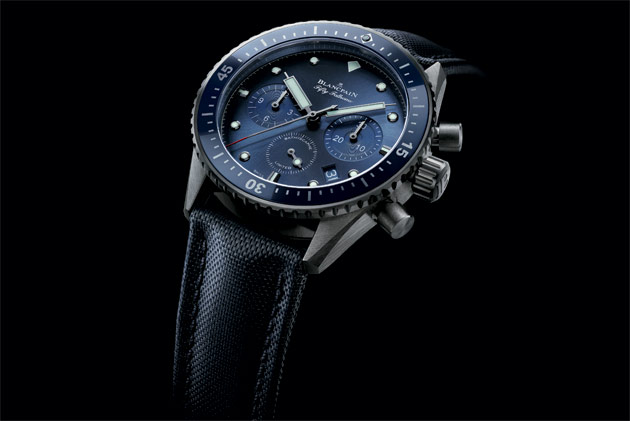 Each purchaser will join the Ocean Commitment Circle and will contribute and reinforce Blancpain’s support for oceanic environmental causes through an additional donation which will be made for each watch. First of this series, the new Ocean Commitment Bathyscaphe Chronographe Flyback is limited to 250 pieces. Blancpain commits to donate 1’000 Euros of the revenues from the sales of this piece to various initiatives.

Although it reflects 60 years of Blancpain Fifty Fathoms diving watch tradition, the Ocean Commitment Bathyscaphe Chronographe flyback features Blancpain’s latest in-house movement, the F385. This entirely new column wheel controlled flyback chronograph movement runs at the high frequency of 5 HZ – 36’000vph, ideal for a chronograph, as each second is perfectly divided into 1/10th of a second intervals. The F385 is further distinguished by its use of silicon for the balance wheel spiral. Because silicon is a-magnetic, its use provides the same degree of protection from magnetism as constructions which rely upon a soft iron inner case. However, whereas soft iron inner cases foreclose use of a clear case back, as the movement would be hidden, the F385’s use of silicon allows both protection from magnetism and view of the movement. In common with all of the 33 new in-house calibers which Blancpain has introduced since 2006, the F385 has a freely sprung balance, with gold screws for fine regulation. Gold screw inertial regulation offers superior robustness and finer adjustment than the more common racket systems.

Two other features of this new timepiece bring important functionality to the world of diving. Unlike most diving chronographs, which paradoxically forbid chronograph use underwater and require that the chronograph pushers be “locked down” when the watch is submerged, the Bathyscaphe Chronographe Flyback has been equipped with sealed chronograph pushers allowing use of the chronograph during dives to a depth of 300 meters. Second, the chronograph itself incorporates a flyback function. Whereas standard chronographs require three actuations of the pushers to time back to back events (one push to stop the first event, a second to return to zero and a third to start the second event), the flyback function greatly simplifies operation. A single push of the return to zero pusher stops the first event, returns the timers to zero and restarts the timing for the second event. This is particularly useful for divers’ decompression stops.

Aesthetically, the Ocean Commitment Bathyscaphe Flyback is housed in a gray ceramic case, with a ceramic crown and ceramic chronograph pushers and a unidirectional blue ceramic rotating bezel marked with liquid metal indexes. The blue color theme is carried over to the dial, which offers three subdials for the chronograph counters and small seconds display. On the back of the watch, the movement and winding rotor are visible through the clear case back. The winding rotor has been specially decorated for this limited series bearing the logo for the Ocean Commitment.

Each Ocean Commitment Bathyscaphe Chronograph Flyback will be individually numbered. In addition, each purchaser of one of these limited edition timepieces will receive a copy of Blancpain’s collectible volume entitled Fifty Fathoms The Dive and Watch History 1953-2013. The copy received by each purchaser will be hand numbered to correspond to the serial number of his watch

Every client will automatically be enrolled in the Ocean Commitment Circle and receive a certificate confirming that a donation has been made for that watch. Thanks to their purchase, they become an active player in reinforcing Blancpain’s support of oceanic initiatives. Special advantages will be granted to the members of the Circle, such as close relationships with Blancpain partners, opportunities to meet them, exclusive information and news through the members area of Blancpain’s new Ocean Commitment website, private invitations to scientific expedition report presentations as well as documentary film premieres.