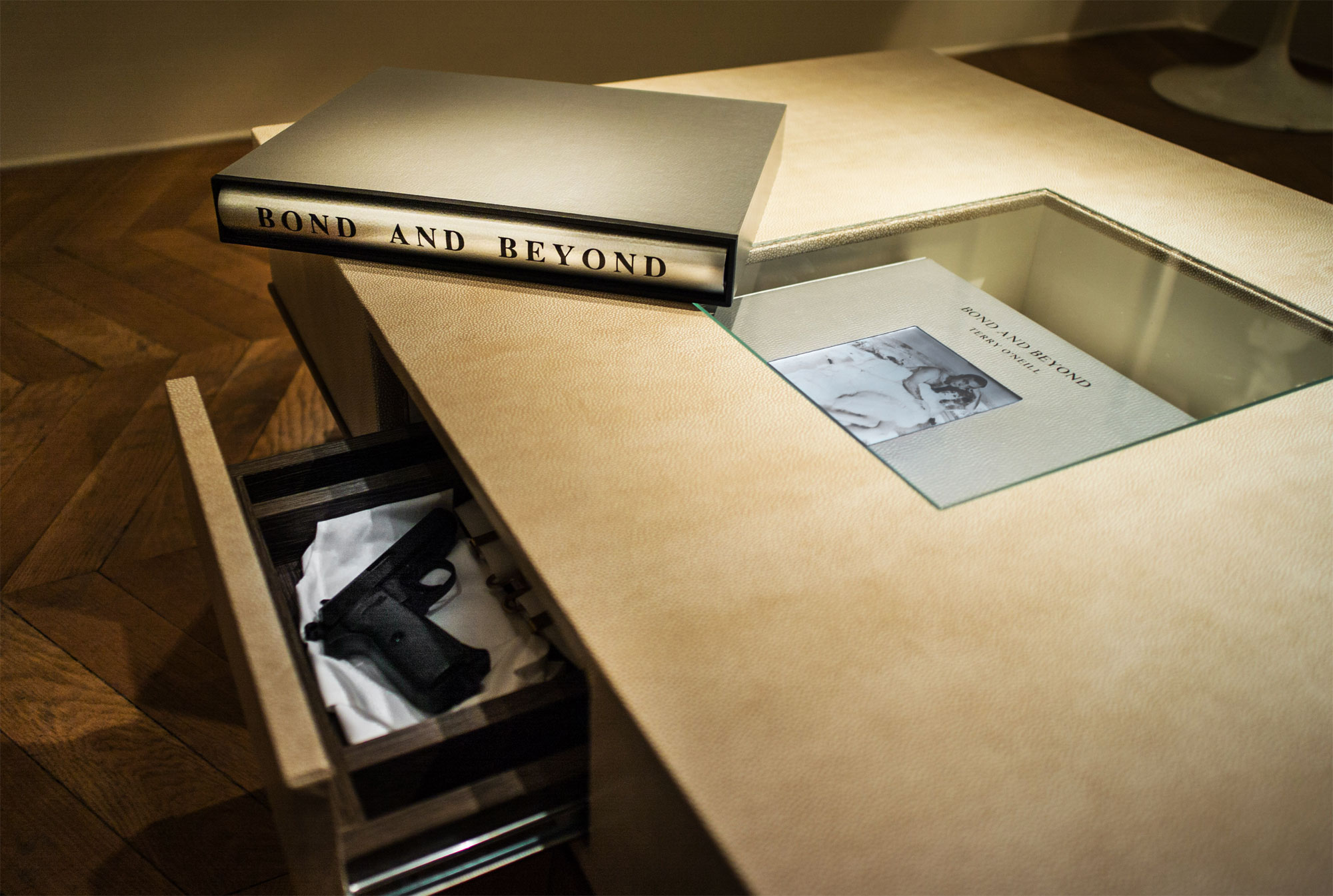 Bond and Beyond: Sixty-five photographs by Terry O’Neill, accompanied by its own coffee table fitted with a digital tablet to reveal all the images electronically

Terry O’Neill, the ‘man who shot the greats’ is still making news, with a series of one-man shows around the world, and a forthcoming new book on Elton John. He tells a story of determination and tireless effort, but his greatest gift was charming diplomacy. He never seemed an intruder.

Terry O’Neill took his battery of cameras, Leica, Hasselblad and Nikon, to Bond film sets, capturing intimate glimpses behind the scenes, from the 1960s to the present day, from Sean Connery to Roger Moore, Pierce Brosnan and Daniel Craig. He was allowed to walk around the film sets and mix with the stars, freed from minders and PR guides, who knew they could trust him never to divulge any embarrassing secrets. 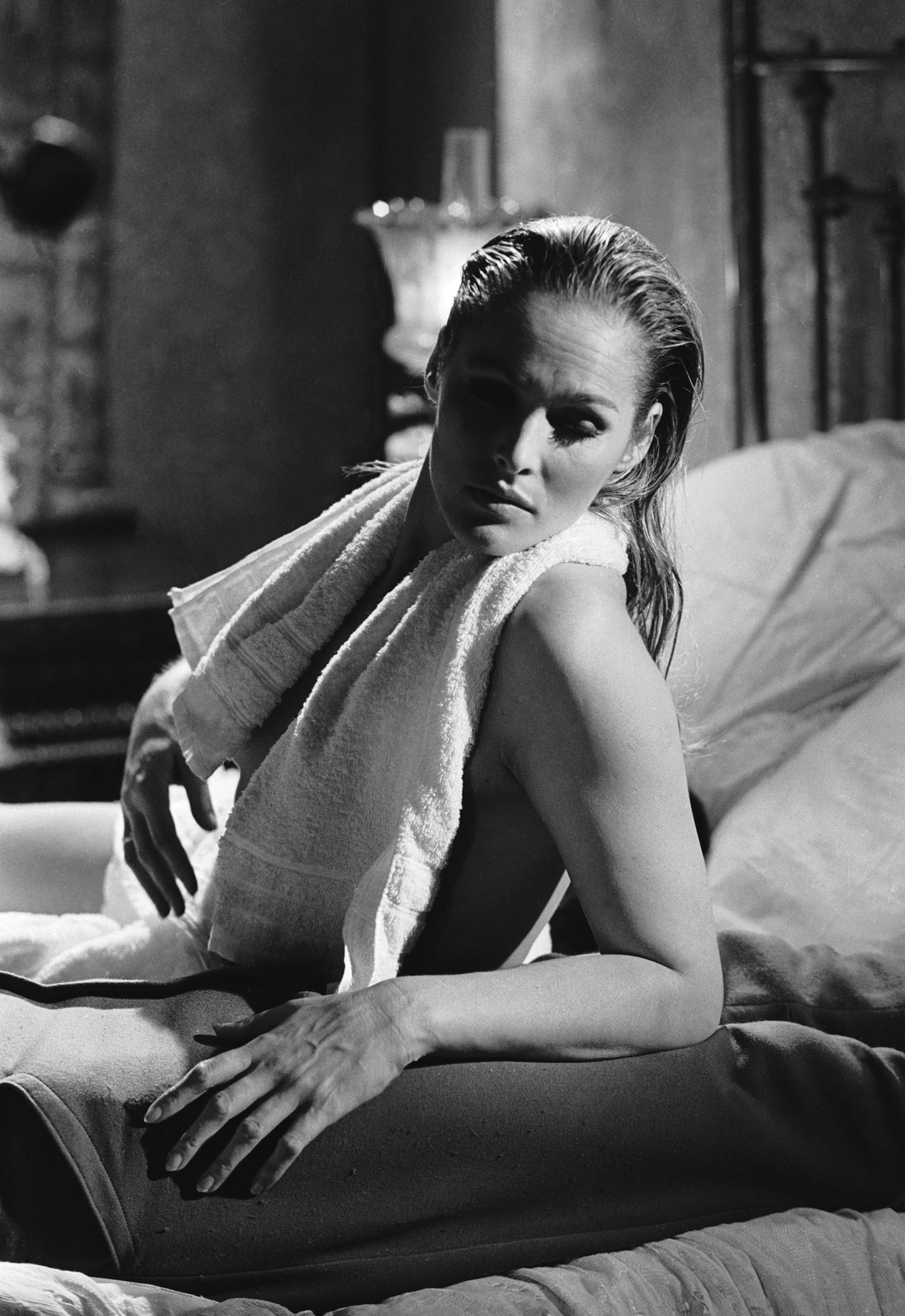 He has always been a superb photographer of women, the book features Bond babes such as Ursula Andress, Honor Blackman and Joanna Lumley. Terry 0’Neill photographed six Bonds and more than 25 gorgeous women.

Terry O’Neill, born 1938, has photographed the frontline of fame for over six decades; from presidents to pop stars. His record of 20th-century idols included the Beatles and Stones, Frank Sinatra, Steve McQueen, Muhammed Ali, Brigitte Bardot and Audrey Hepburn. Frank Sinatra, notoriously demanding and capricious, allowed him into his life, shooting roll after roll for three weeks. ‘ He didn’t pose, he didn’t say ‘stop’ but let me tag along and do as I pleased.’

He tells the story of his early years, the son of Irish immigrants, leaving school at 14, training for the priesthood, then hoping to be a jazz drummer, ‘stumbling into photography while working for British Airways (then BOAC), although I still used to take the whole drum kit around with me on the bus’.

He managed to land a job on a national newspaper, using every ounce of energy and drive to make the most of that golden opportunity. He was the first photographer to take a picture of the Beatles, waiting for three months to get the image published in his targeted double page slot. After deciding to turn freelance, he says. ‘I worked every single day of the week. I didn’ t care, Saturday, Sunday. The Rolling Stones Manager Andrew Oldham would bring the band up to my office on the train because I was too busy to go to them.’ His work began to appear around the world for Time, Newsweek, Paris Match, Vanity Fair, Stern, Vogue. 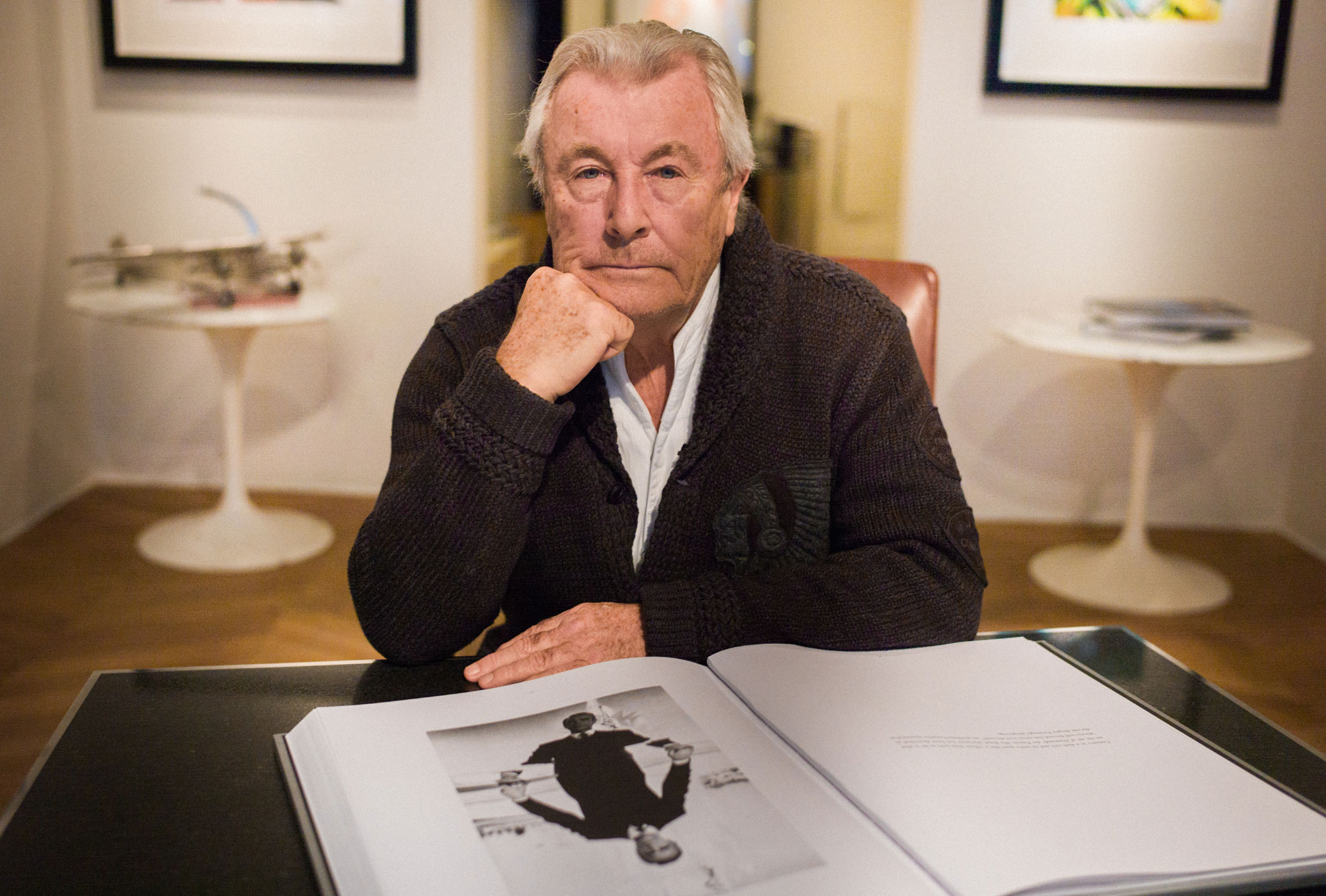 Keith Richards said of him: ‘Terry 0’ Neill? He was everywhere with his camera in the ‘60s. He put the Rolling Stones on the front page.’ He edged his way into the film industry, describing his role as a film reportage photographer. ‘I wasn’t what they called the stills man. A chance meeting with the head of publicity for 20th Century Fox Europe gave me a chance to hang around the studios, taking pictures for two weeks with Paul Newman or Sean Connery, or whoever. I spent much of my youth around movie stars. It was fabulous.’

‘And as you built up a reputation, so everyone opened doors for you.’ 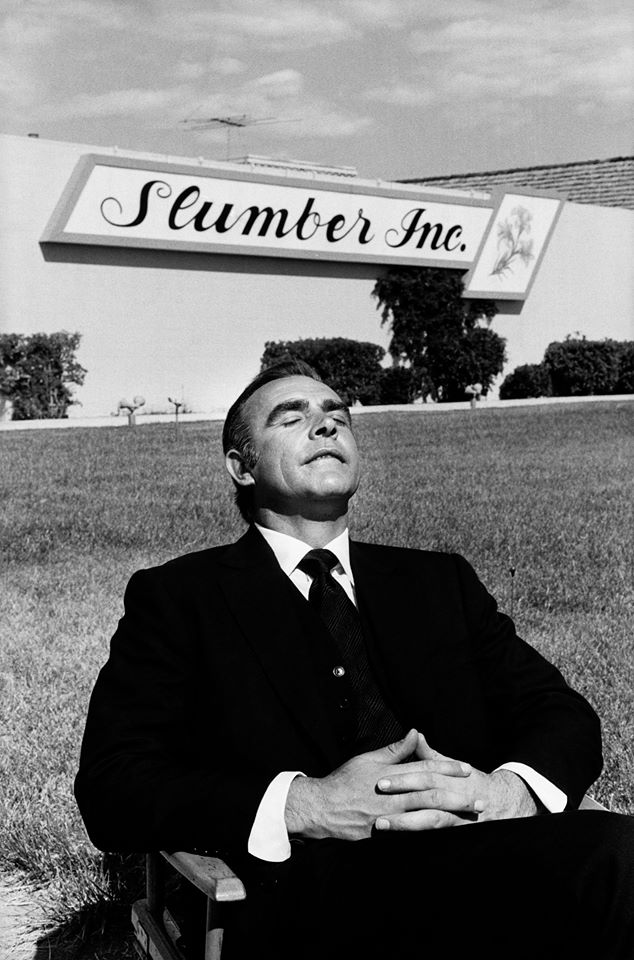 Terry O’Neill was in on the start of the action as the Bond official photographer, helping to fuel the romance between Bond and his Aston Martin with his shots to promote Goldfinger.

He first encountered Bond, taking photographs on the set of the second film From Russia with Love.

‘Bond just got bigger and bigger, and nobody really had any idea it would. Most people thought there would just be a couple of films and things would move on. But it was a good time, it was in the 60s when anything coming out of England was first-rate. Bond swept the world.’

He goes on to say: ‘It was an incredible time. Young people took over, creating their own cultural landscape on stage, in music fashion and on the film set. I was lucky, seriously lucky. I was having the time of my life. I never realised then that we were remaking the world in our own image – or that mine would become such a testament to the time. ‘

‘And the freedom I was given, on film sets, backstage and just rubbing shoulders with my mates who became these icons, simply isn’t allowed to photographers today.’ 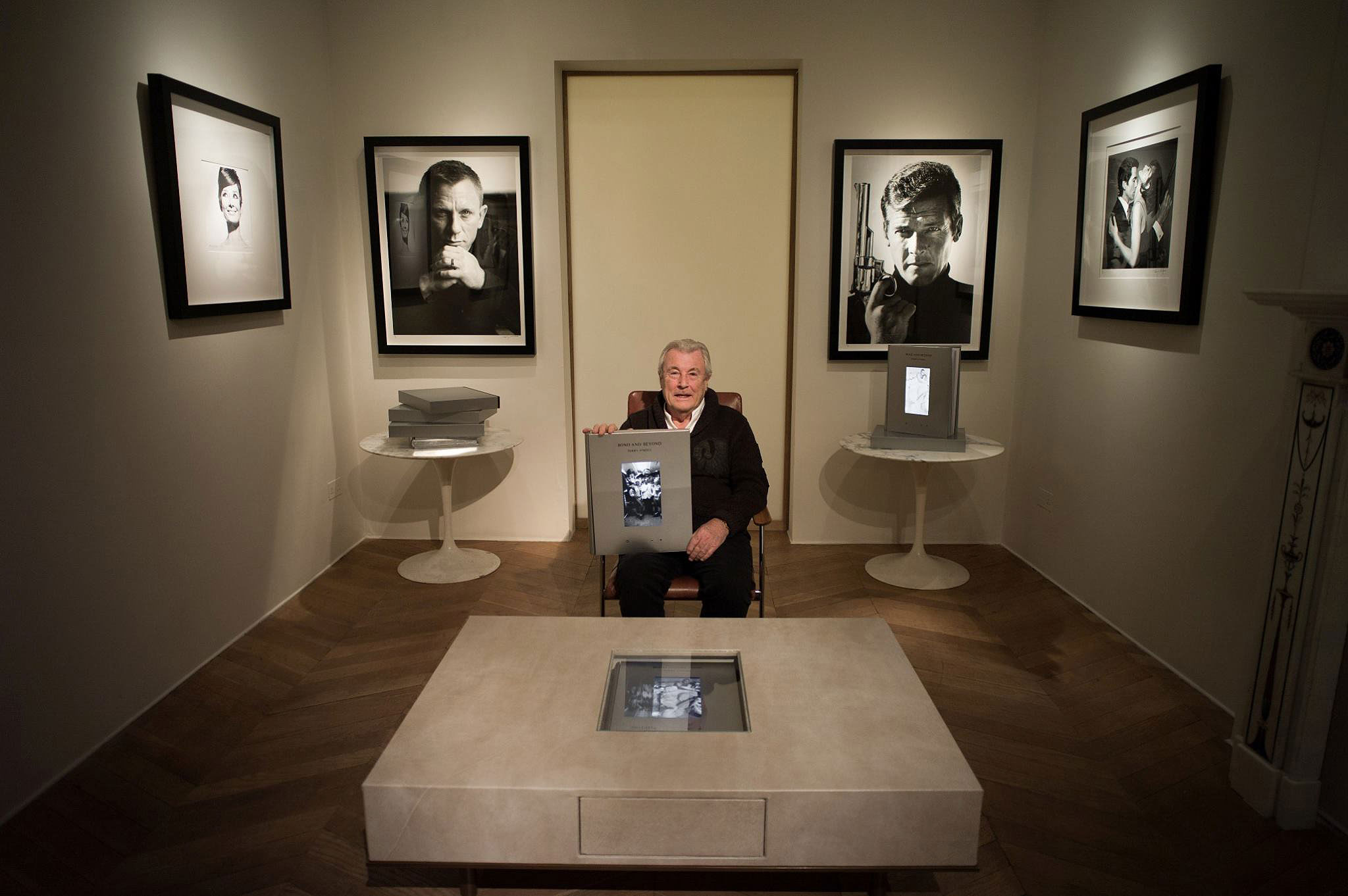 Terry 0’Neill took photography out of the studio. He was not interested in the formal poses, once standard in show business, but moved into to the real world. His photographs capture that ‘decisive moment’ in the life of his subject, as with the great European reportage photographers who created unforgettable images of family life, city streets, misery, poverty, war and peace. These immortal names include Cartier-Bresson, Robert Capa, Lartigue.

Lucy Davies, a perceptive writer on photography as art, describes the distinctive quality of Terry 0’Neill: ‘famous for his charm, which coaxed an easy, intimate sparkle from those who had it and knew it, those had it but hid it, and those who never had it at all.’ 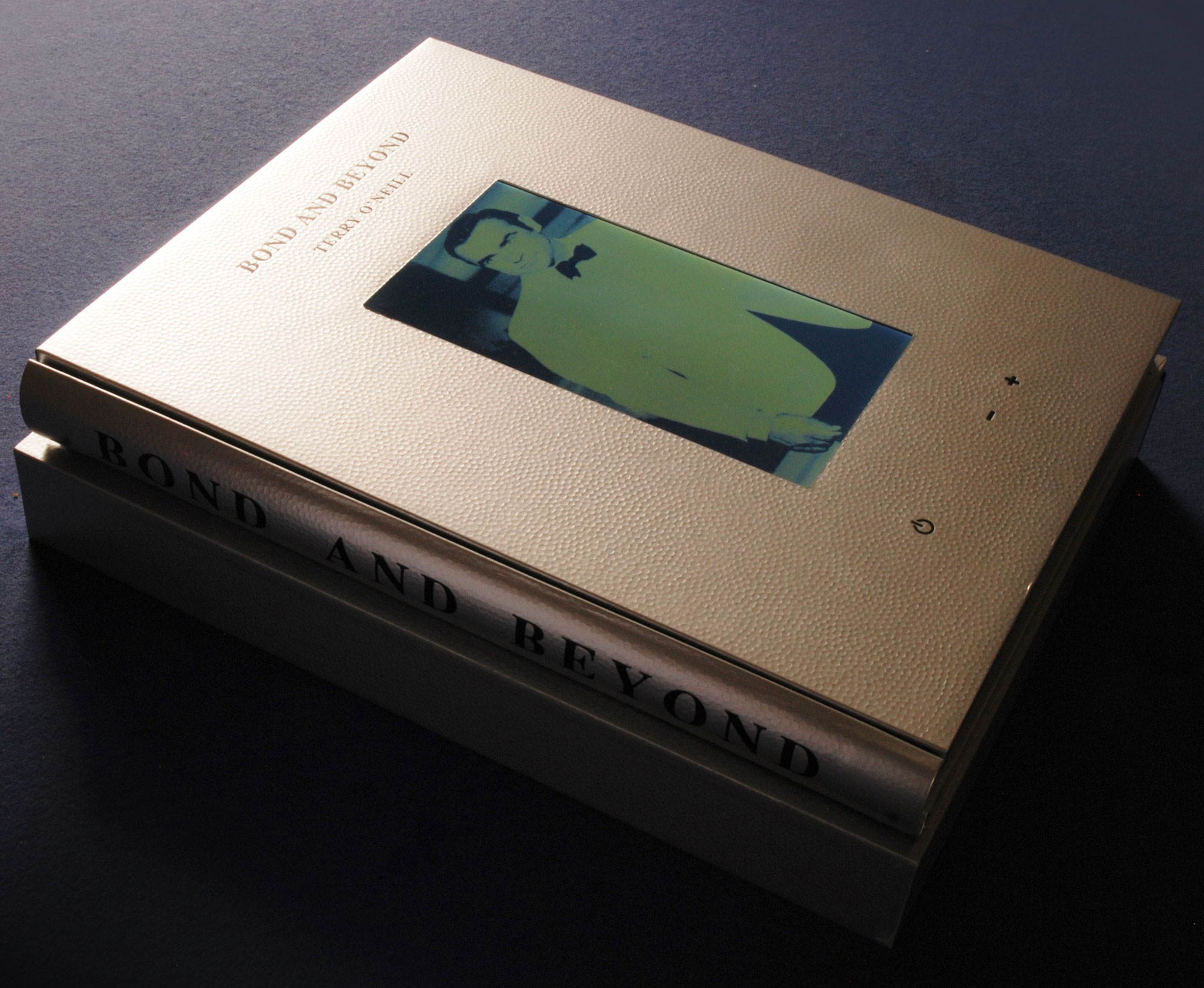 His latest triumph is a record if those years of freedom and creativity, the story of a franchise of unimaginable success, headed by James Bond himself, the gentleman spy, suave, ruthless, elegant, never without a collection of magic tricks. O’Neill believes Sean Connery to be the best Bond, and Daniel Craig to be landed with the hardest job. ‘When Sean was starting it, nobody knew anything about spies, but now everybody knows everything about Bond, and Daniel’s trying to fulfil that role. I think he’s doing it brilliantly.’

‘Bond and Beyond’ by Terry O’Neill – Where and how 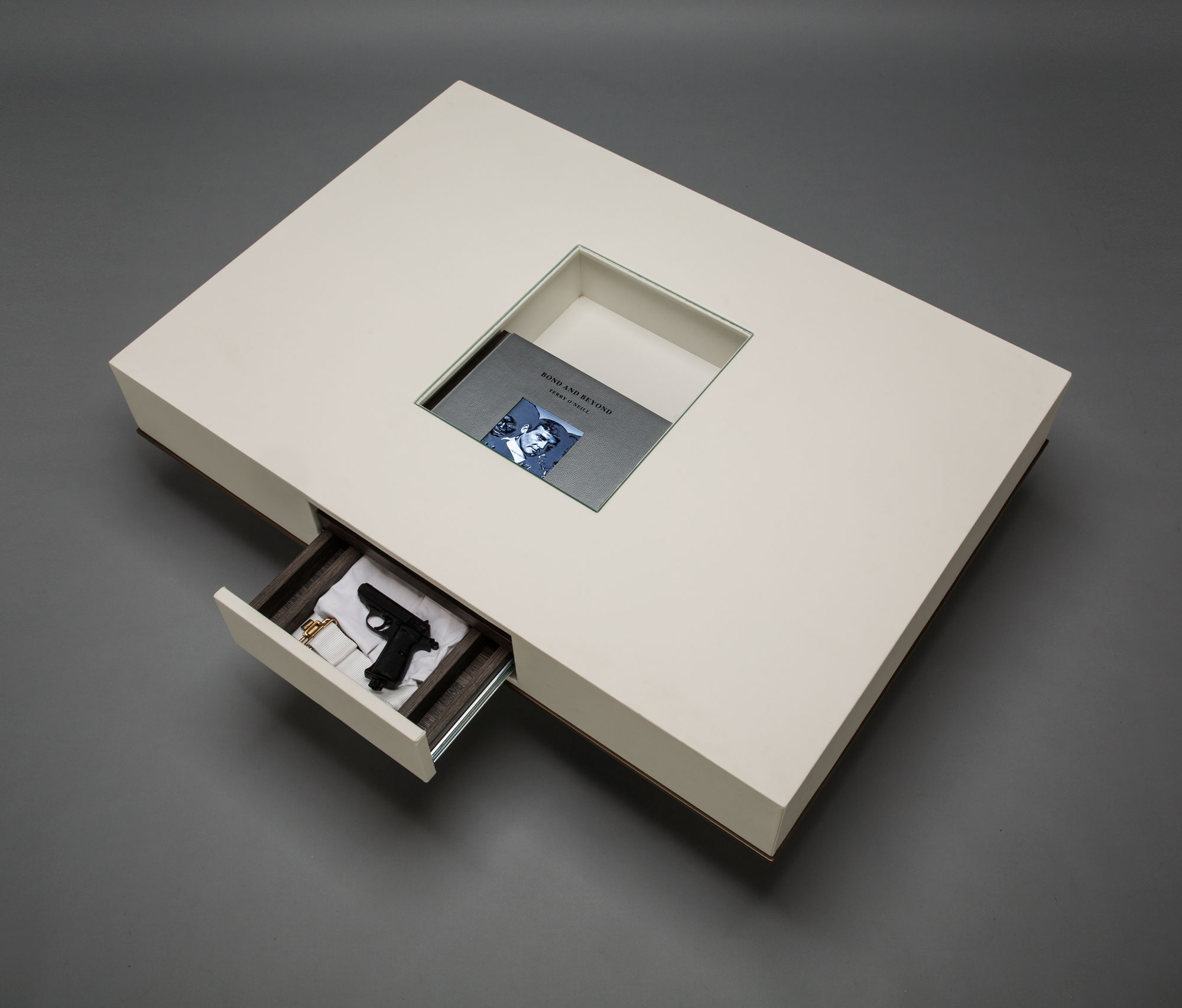