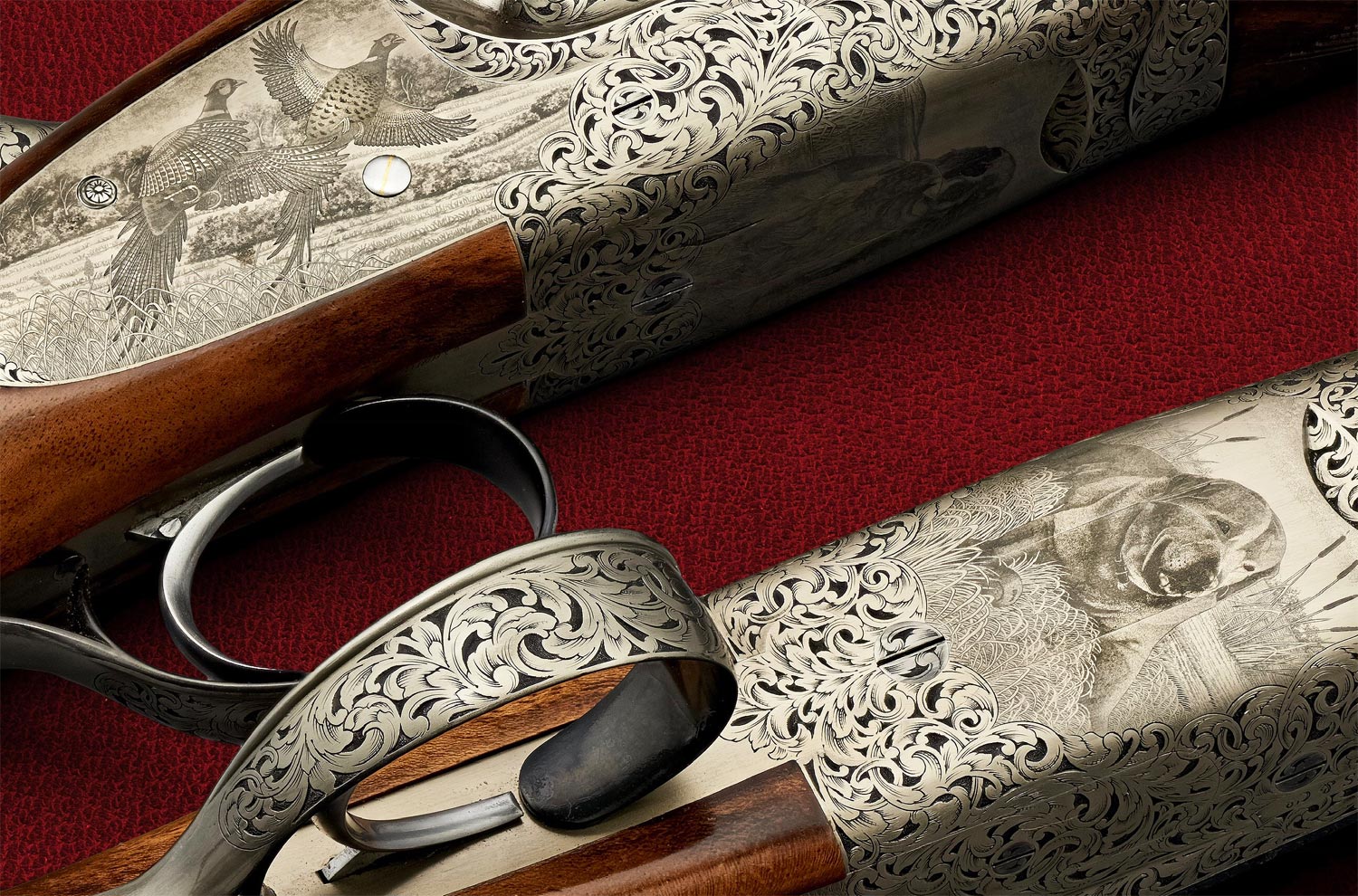 Boss & Co is committed to preserving the art of gunmaking at the highest level and employ a number of apprentices to learn from the master gunmakers.

One apprentice told me he had been working on a single piece for the action, for ten hours. Filing then smoke-blacking the metal until the tiny pieces fit perfectly, with no tolerance. All by hand, over days and weeks. To learn such skill takes years and years of patience, a willingness to learn and a passion for the subject.

There are five main stages to create a Boss gun, a process that takes thousands of hours, and would take a book to explain, but to give a hint of what takes place there follows a brief explanation of that process. 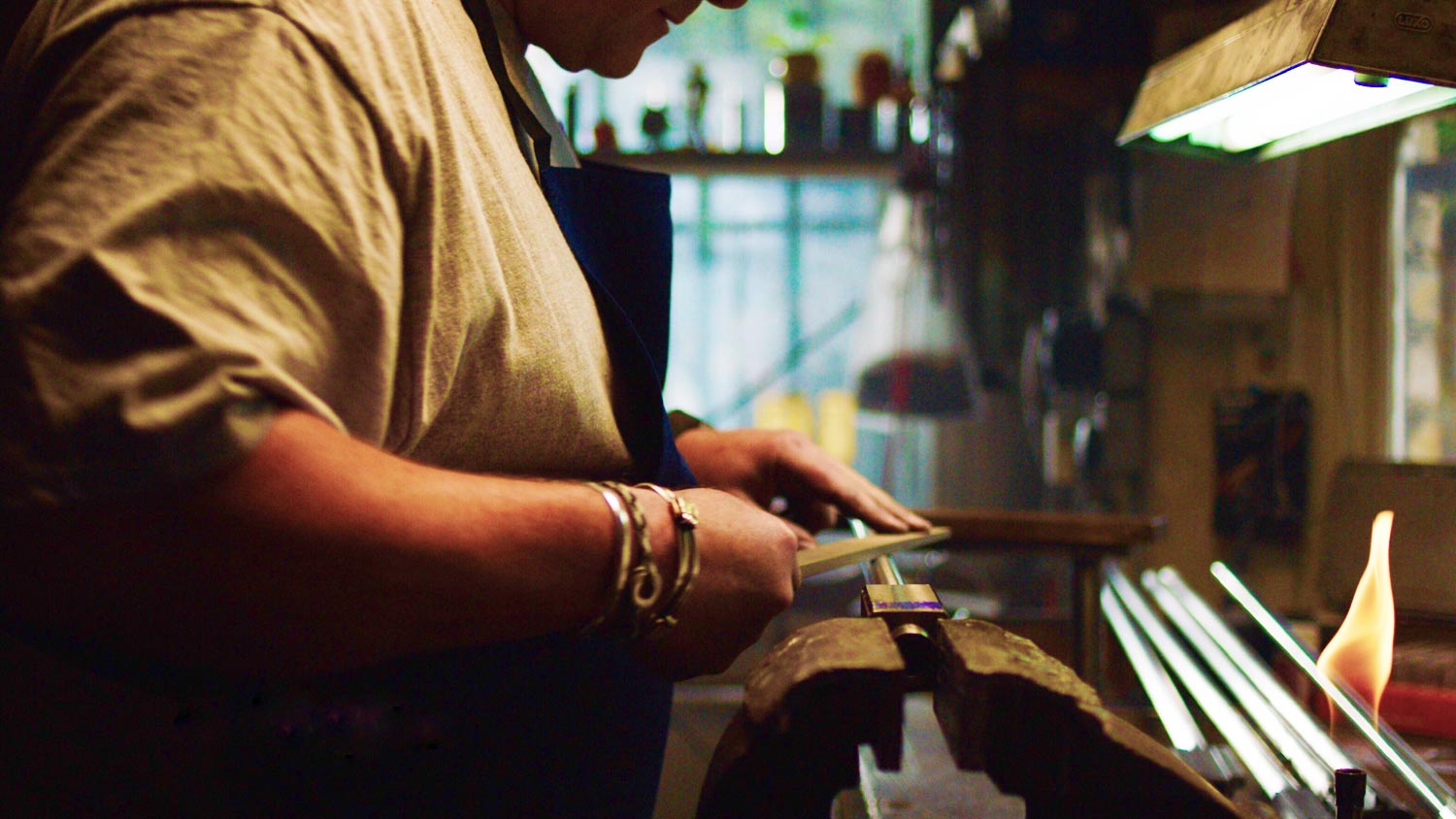 Barrel Making
Concentric high-grade steel tubes are braised together to create an individual barrel, each set to the customer’s own specification. The barrel is then meticulously filed and shaped before perfectly soldering on the ribs and wings.

This stage is where the bespoke element first applies as fine details have to be decided early to allow the barrel maker to shape the barrel to an exact specification One particular detail is choke, the shaping of the inside of the barrel to decide the spread of the pellets leaving the gun.

The Action
The heart of any Boss gun begins in the action shop, with each individual shape filed to perfection after being sculpted with a hammer and chisel. Uniquely, Boss drop the barrels into the action rather than hooking the barrels in as is often the case. 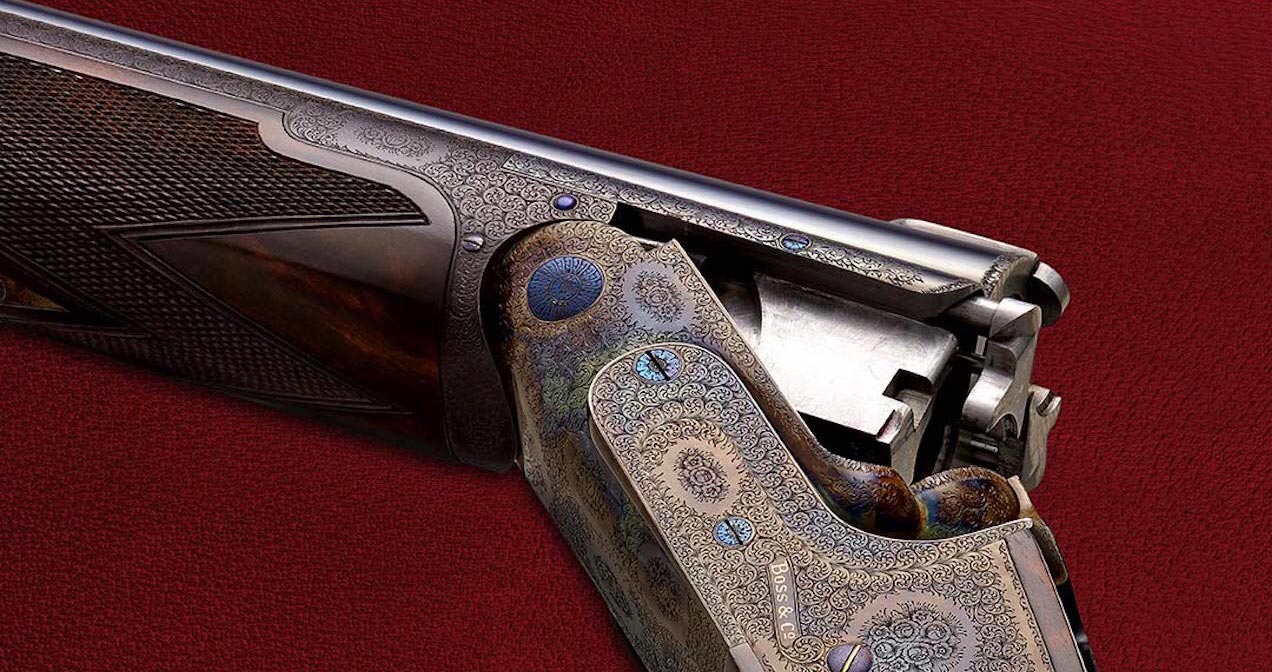 Attention to detail on all the small internal parts (including Boss’s own single trigger) is carried out with precision. I witnessed a gunmaker filing the unique Boss & Co Trunnions on which the barrel pivots. These are so detailed, yet are hidden away within the mechanism and engraved over so as not to be seen. Whether seen or not, the attention to detail remains the same.

Stocking
The woodwork is beautifully crafted and fitted to the metal work using original methods, all shaped by hand to the desired size and measurements. Precise chequering of the stock is carried out by the craftsman’s own hand-made tools by eye.

The wood is sourced from Turkey, as that is where you find the best, exhibition grade walnut. Various shapes can be fashioned such as pistol grip, and each stock is made to the owners firing preference and size. 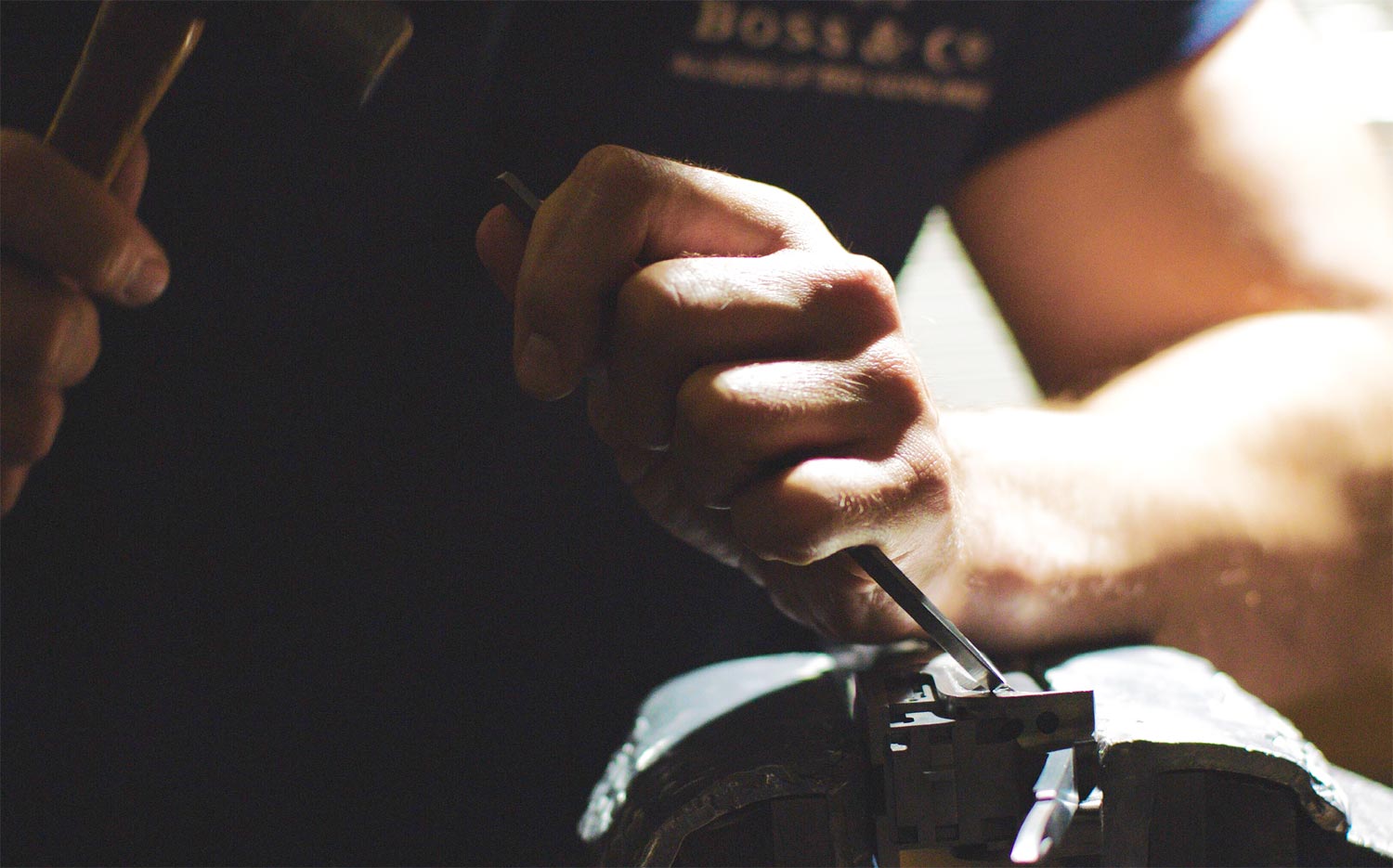 Engraving
The engraver at Boss is an artist in the truest sense, and can replicate any design into metal, taking hours to create magnificent works of art, freehand, using the most basic of tools.

Owners can choose any design they desire, but many opt for the acclaimed Boss Rose & Scroll pattern due to its traditional origins and historical connection to Boss. However, game scenes remain popular with many owners choosing to immortalise their gun dog, or country estate onto their Boss. 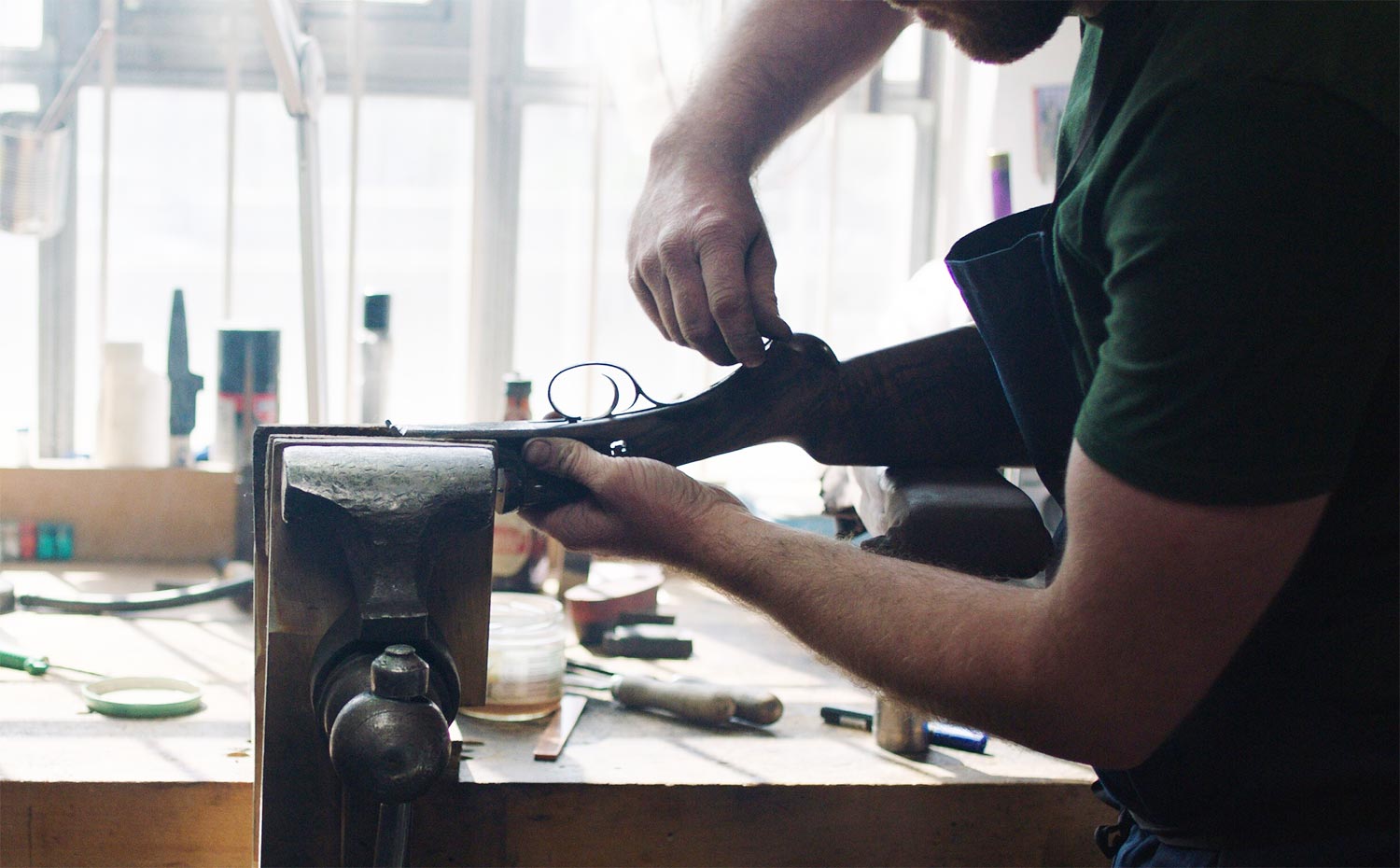 Finishing
The final process of a Boss gun is at the skilled hands of the Finisher. The wood to metal finish is meticulously examined, and an oil finish is applied to the woodwork by hand. The mechanical side of the gun is checked, regulated and extensively test fired prior to delivery.

Hours of work go into each process, and the combined figure is 1400 hours per gun on average, but many take far longer if the specification demands it.

Arthur notes that the workers are like a family, and that he is protective of the Boss brand and its place in history as the finest of the London gunmakers. Boss will never compromise on quality and it will remain a bespoke Gunmaker for many years to come.

Boss do one thing, they always have, and they always will and that is to make Best Guns Only.