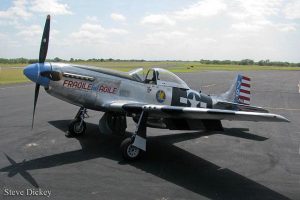 The Flying Legends Air Show is one of Europe’s finest airshows and has become a by-word for flying excellence bringing together the most exotic historic aircraft and the world’s best pilots for an amazing celebration of classic Warbird aircraft. Through a longstanding friendship with the Fighter Collection, Bremont watches developed a limited edition watch, namely the Bremont EP120, encompassing parts of the very Spitfire operated by the collection. This year Bremont will be launching the Bremont P-51 watch built utilising parts of the famous “Fragile but Agile” Mustang that was formally operated by the Fighter Collection. Bremont announced that the “Fragile but Agile” will be shipped back from the US for the airshow in July to fly in the world famous “Horsemen” routine.

Giles English the founder of Bremont said  “I have been a huge fan of The Fighter Collection for most of my life, both Nick and I were born in Cambridge and used to watch our father fly in the Flying Legends air display as a child. It is wonderful that Bremont is now part of the airshow and that both EP120 and Fragile but Agile will be there.”

Jane Larcombe of Flying Legends said “Bremont is a perfect partner for us as they have a very strong aviation DNA and their wonderful aviation watches are very relevant to our audience and to our pilots.”

The Flying Legends Air Show takes place on the 9th and 10th July, 2011 at Duxford Aerodrome which is situated close Cambridge in the UK.

Following on from the great success and interest generated by the arrival of the very special and unique Bremont EP120 limited edition watch back in late 2008, Bremont is releasing the Limited Edition Bremont P-51 watch a chronograph chronometer built with original parts of the famous 1944 Mustang WWII aircraft P-51K-10 (serial number 44- 12016), a Pacific war veteran and also known as “Fragile but Agile”.

The make-up of the Bremont P-51 watch

Original aluminium metal from the aircraft fuselage is integrated into both the dial and the movement of the Bremont P-51 watch with the dial itself inspired by the clocks found in the P-51 aircraft. The 43mm hardened steel Trip-Tick case using Bremont’s B-EBE2000 technology integrates the new rotating ‘Roto-Click’ inner bezel that houses four ball-bearings inside the case. As with many of Bremont‟s latest watch designs, the Bremont P-51 watch is assembled in the company’s atelier in England rather than their workshop in Biel-Bienne in Switzerland, and houses a modified Swiss BE-54A automatic chronometer movement that also shows UTC time.

About ‘Fragile but Agile’
P-51K-10 (serial number 44-12016) rolled off the North American Aviation assembly line in Dallas, Texas, on 18 December 1944 and was then loaded on a ship on the 15th January 1945 for an assignment in the Far East. It was to take part in the American campaign to retake the Philippine Islands from the Japanese. On arrival in the Pacific Theatre of Operations, the aircraft was assigned to the 342nd Fighter Squadron of the 348th Fighter Group, which then was stationed at the San Marcelino airbase, just north of Manila Bay. Lt. Bert Lee Jr. was assigned to fly the aircraft. Lt. Lee was credited with two confirmed victories during the war, which accounts for the two Japanese flags painted below his name on the plane – one was a Japanese A6M “Zero” fighter near Manila and the other a twin-engine “Betty” bomber. A lot of his missions in the P51 were ground support, in what was then Indochina. Lee and his Mustang both survived the war. Following its time in the US Air Force, „Fragile but Agile‟ then spent time serving with both the Swedish and Israeli military before being overhauled and operated for many years by The Fighter Collection, based at Duxford in the UK. Recently, the Mustang was again treated to a major overhaul by Steve Hinton‟s Fighter Rebuilders at Chino, California having been acquired by the Friedkin Family‟s Comanche Fighter Collection.
The Bremont Watch Company is a British company that was started by brothers Nick and Giles English in 2002. They offer a range of highly developed aviation inspired timepieces of exceptional quality and high aesthetic value. All watches are built at their atelier in Switzerland. Bremont had the honour of being awarded the Walpole Award for Best Emerging British Luxury Brand at the 2008 Walpole Awards for British excellence which took place in November 2008.