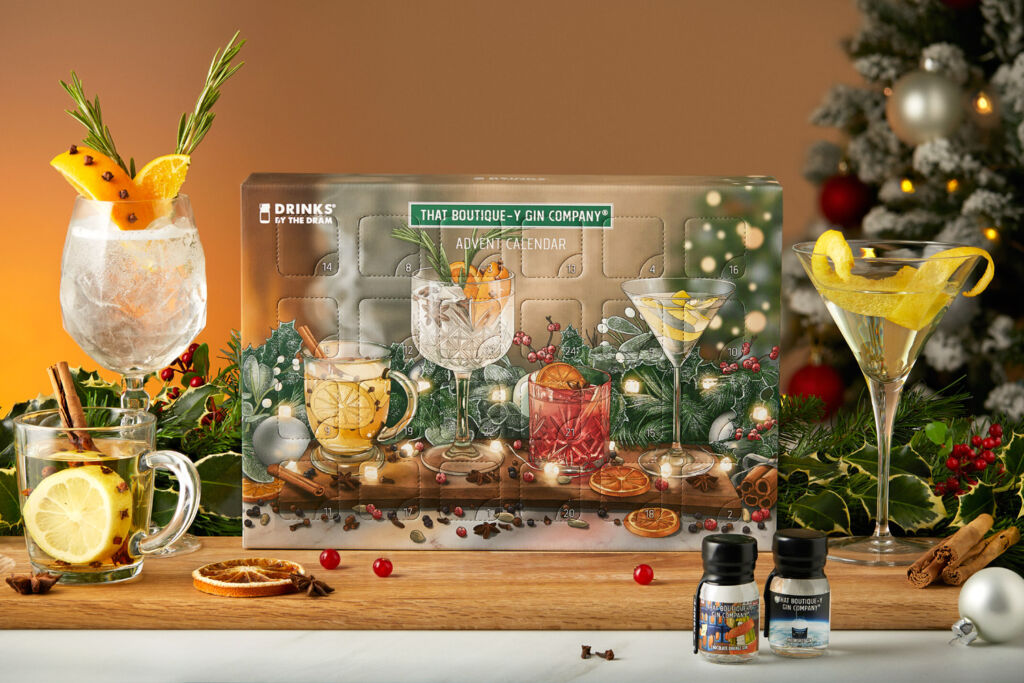 The countdown to Advent has begun and the race to find the perfect Advent Calendar continues. Gone are the days when Advent Calendars only contained chocolate or even just a pretty picture behind a door – now Advent Calendars are available in a whole host of styles, from beauty to beer, wine and spirits, and even cheese and jewellery.

For 2019, Drinks by the Dram has returned for the 8th year running with a brand new line-up of stunning Advent Calendars. From the innovative That Boutique-y Gin Company Advent Calendar shown in the man image and priced at £50, through gin, whisky, vodka, rum…the list continues (from £100-£10,000).

Drinks by the Dram probably creates the most extensive range of spirits Advent Calendars on the market with a Calendar to suit every pocket and taste bud.

“If you’ve never held one of the Drinks by the Dram calendars, you’ll be in for a pleasant surprise. They are not like one of those light flimsy advent calendars so many of us are used to. The calendars are substantial, weighty, high-quality pieces that are guaranteed impress anyone at Christmas!” – Paul Godbold.

To coincide with the launch, the brand has conducted a survey to find out more about Brits’ Advent habits.

The #treatyoself mentality continues as millennials are most likely to buy themselves a spirits Advent Calendar, with 60% saying they would self-gift.

That said, we’re also a nation of sharers when it comes to actually drinking our drams of spirits, with over three quarters (78%) of those surveyed saying they would share at least some of their drams.

Despite being the most likely to buy themselves an Advent Calendar and contrary to popular belief, Londoner’s are also most likely to share the drams once they have opened their Advent Calendar, with 88% saying they would share at least some of the drams from their Calendar with friends. That’s 24% more than those in the South West with only 63% choosing to share.

While gin has been the most talked-about spirit of 2019, whisky and gin are on a level playing field in the UK when it comes to choosing a spirits Advent Calendar. 28% of those surveyed said they would prefer a whisky Advent Calendar while another 28% chose gin.

The North/South Divide!
Yorkshire has the biggest gin lovers, with 43% of those surveyed choosing a gin Advent Calendar over other spirits.

However, the tide might be turning for gin as trend leaders in London are much less likely to choose a gin Advent Calendar than the rest of the UK, with just 18% vs 28% national average. In contrast, Londoners are big whisky drinkers with 36% choosing whisky vs the national average of 28%. This even beats Scotland, where only 33% would choose a Whisky Advent Calendar.

If you are a parent in Wales, your luck is in as you are most likely to bag yourself a spirit Advent Calendar from your children.