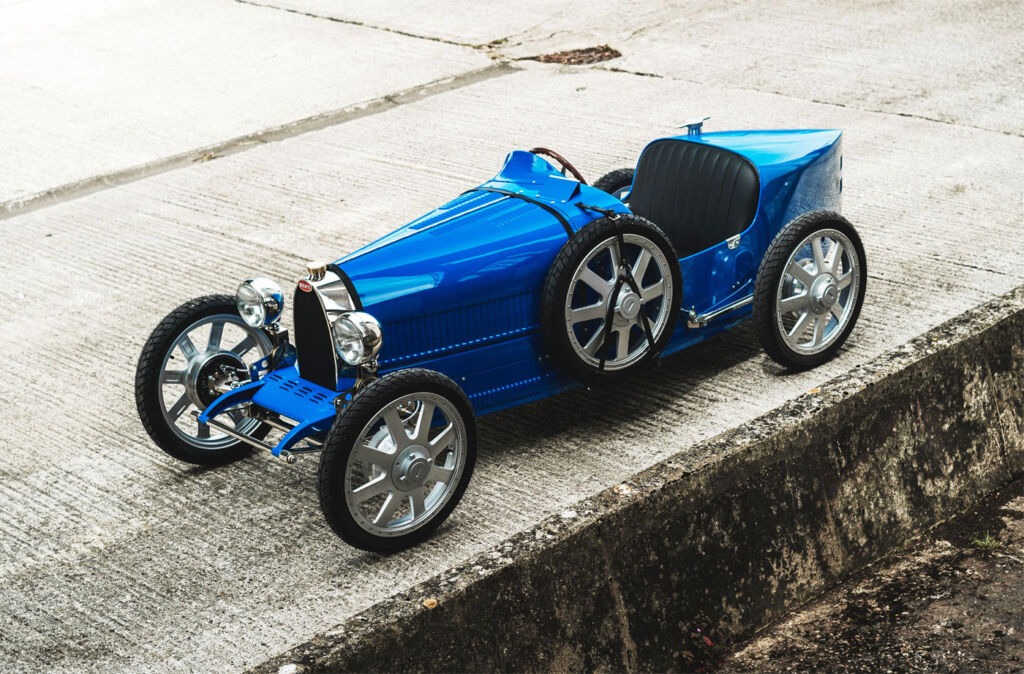 The limited production run of 500 Bugatti Baby II cars was unveiled at the 2019 Geneva International Motor Show. All the cars were snapped up within a few weeks of the show. However, Bugatti has announced that some build slots have unexpectedly become available, meaning you could be in luck!

The Bugatti Baby II was developed in partnership with The Little Car Company and has recently gone into full production. Although the car is called the Baby II, many who’ve had the opportunity to drive it, consider it to be more of an unruly teenager than a baby as it has a bit more pace than you might expect.

The Baby II is a homage to the first Bugatti Baby which was constructed in 1926. It was the brainchild of Ettore Bugatti and his son Jean who wanted to build a scaled-down model of the company’s Type 35 for Ettore’s youngest son, Roland for his 4th birthday.

The car was only meant to be a special one-off, but customers visiting the factory in Molsheim caught sight of it and insisted it went into production, and it did, with 500 being built from 1927 and 1936.

This model which we’ll refer to as the ‘original’ was a half-sized scale model of the Type 35 restricting who could drive it. Fortunately, the Baby II is 25% larger, meaning that even teenagers and can now experience driving a piece of Bugatti history. 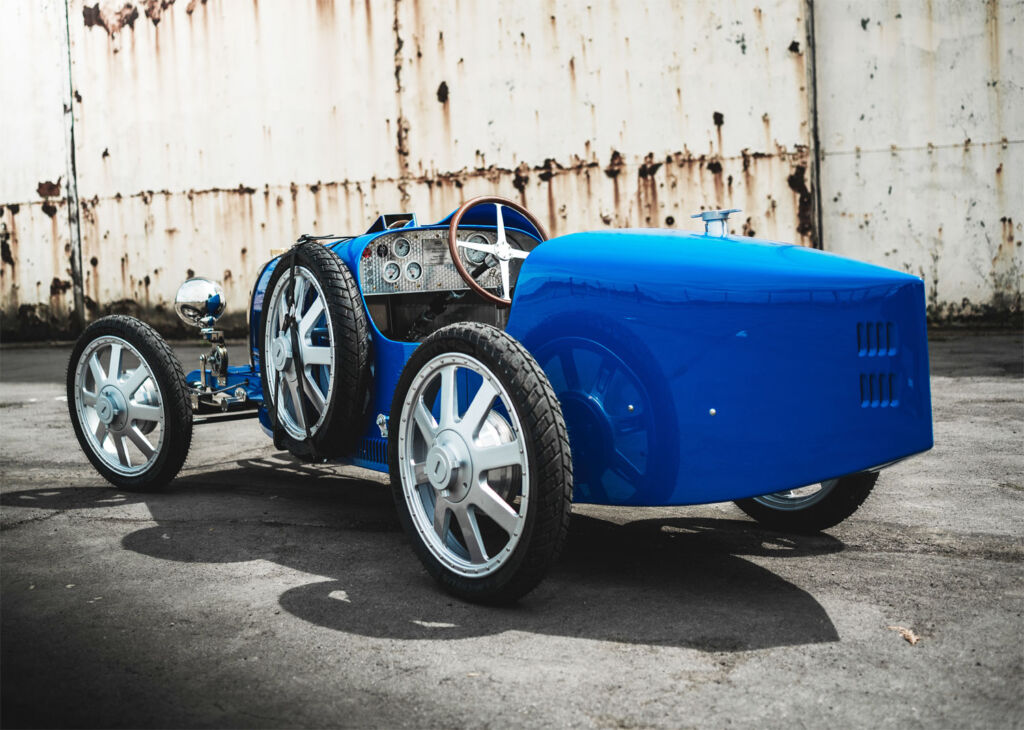 The Bugatti Baby II is available in three versions:

Bugatti Baby II Performance
With any of the above models, you’d be a braver man than I to let a young person behind the wheel, but that’s just my opinion. All the models are rear-wheel drive and have a limited-slip differential, selectable driving modes and hydraulic brakes. On the Base model, there are two modes. Novice limits the top speed to 12 mph and expert which lets the car reach 30 mph.

The Vitesse & Pur Sang models offer considerably more oomph. Both have an upgraded power train which can be unlocked with the Bugatti Speed Key. The extra power will have the wheels spinning before unleashing the car up to its top speed of 42mph. Providing the driver is not too weighty, the cars will go from 0-60 kph in just six seconds! 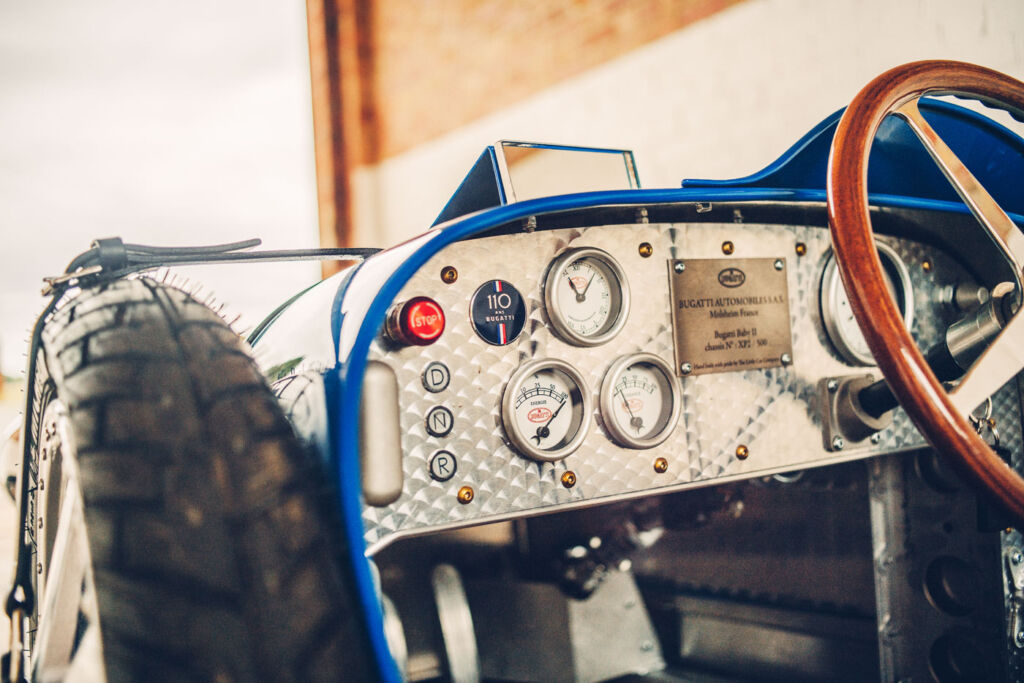 As you would expect, the cars have the same aluminium dashboard found on the original. All the same switches are present including faithful working replicas of the original Type 35’s instruments, with some being adapted for the modern world.

Inside, the iconic four-spoke steering wheel has been faithfully reproduced and it even has a quick-release mechanism making access to the cockpit simple. The solid aluminium pedals are adjustable ensuring the ideal driving environment and they too have been given special attention with the famous “EB” logo being stamped on them.

Forward, neutral and reverse gears are selected via the fuel pump handle which is also an exact replica of the original.

Another nice touch is the cars get Bugatti’s famous ‘Macaron’ badge which is made from solid silver. If you want an even more unique Bugatti Baby II, both the interior and exterior colours can be customised which is done via an online configurator. 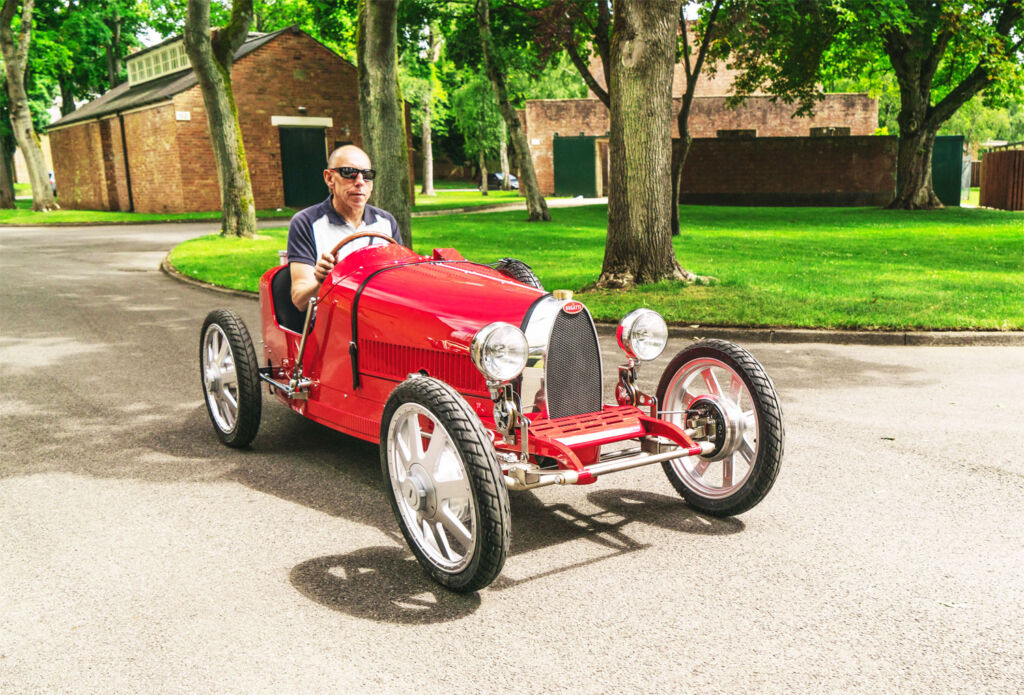 Every owner of a Bugatti Baby II will be able to let their children and grandchildren drive their cars at renowned motor racing circuits as the cars come with memberships for the Bugatti Owner’s Club and The Little Car Club.

Although I said it would be a brave thing to unleash a young person in one of these cars, on reflection, there can be little more joyous than watching the next generation experiencing a faithful replica of a motoring icon.

For more information and to grab one of the Bugatti Baby II build slots, visit www.bugattibaby.com.