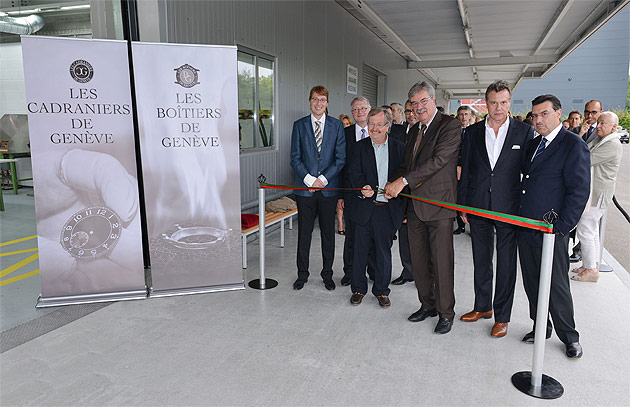 The official inauguration of the Cadraniers de Genève and the Boîtiers de Genève took place last Tuesday at 18h00 in a common building located in the district of Meyrin, canton of Geneva, at 11 rue Emma Kammacher.

This new prestigious watchmaking pole reunites, under the same roof, the whole of the watch casing production (dials, cases and metal bracelets) on 2’600 m2.

The Cadraniers de Genève and the Boîtiers de Genève were inaugurated by Mr. Monsieur Pierre-François Unger, President of the Swiss State Council, and by Mr. Pierre-Alain Tschudi, Mayor of Meyrin, who cut the official ribbon in company of the 2 Directors of both companies. François-Paul Journe, CEO and Founder of F.P.Journe, and Juan-Carlos Torres, CEO of Vacheron Constantin, co-shareholder of the Cadraniers de Genève, welcomed their guests, clients, collectors, and members of the press, who came to discover the making of very high end watch dials and cases.

Mr Pierre-Alain Tschudi and Mr Pierre-François Unger wished a warm welcome to the 2 companies in Meyrin and congratulated the growth of the watchmaking industry in the area, with the soon to come Richemont campus, and the development of employment opportunities.

Mr Pierre-François Unger imbued with a great knowledge and passion for horology, underlined in his speech, his admiration for the outstanding development of F.P.Journe, and his admiration – shared by Mr Juan-Carlos Torres – for the authenticity and engagement in his work. He also celebrated the care and high craftsman value brought to the making of these high end dials and cases; those same values shared in the manufacturing of F.P.Journe’s innovative and exclusive movements.