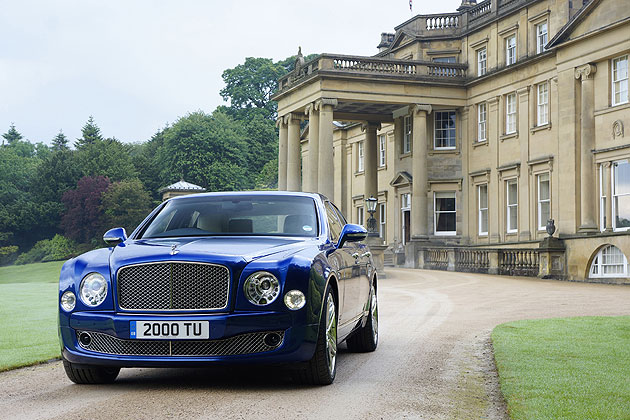 Luxurious Magazine enjoys exclusive access to the home of one the world’s most prestigious automotive brands.

Where it all began 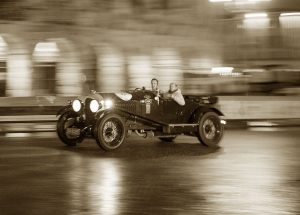 For a little bit of history, Walter Owen (W.O.) Bentley, an engineer by trade, founded the company in 1919 in the Cricklewood area of London. He developed aluminium pistons and cylinders that were used in the Sopwith Camel engine during the First World War after its predecessors proved very unreliable, and for all of his efforts, he was awarded £8,000 by the Inventors Council and an OBE by the Queen. He proceeded to establish his own automotive business, and like today’s product line-ups, he brought out a base model and subsequently increased the power to what was known as the “Speed”, and it was followed by the “Supersports”, names that all continue to be used across Bentley’s product range.

1929 then saw the Wall Street Crash and the company went into receivership, becoming part of Rolls-Royce in 1931. The new owners proceeded to move the factory to Derby where Rolls-Royce was based, and made the cars more refined. Seven years later, a plant was built in Crewe to produce Rolls-Royce Merlin engines, which was later relocated to Derby after the war and motor production took its place on the Cheshire site still used today.

In 1970, Rolls-Royce themselves got into difficulty and the motorcar division (Rolls-Royce Limited) was sold off as a separate business which remained independent until Vickers bought it in 1980. They were manufacturing tanks and baby incubators, amongst other goods, at the time, but was never the perfect match. Fourteen years later, and the automaker was put up for sale and the Volkswagen group outbid BMW, but the former did not have the rights to use the Rolls-Royce name as this still belonged to Rolls-Royce Holdings plc.

BMW began providing parts for the new range of Rolls-Royce and Bentley cars and their engine supply deal ended in 2003. From this point onwards, VW became the sole provider of automobiles carrying the “Bentley” marque along with over 3,500 passionate staff and a factory, investing nearly £1 billion in the process. BMW established Rolls-Royce Motor Cars Limited who continue to produce models at their state-of-the-art facility near Chichester. 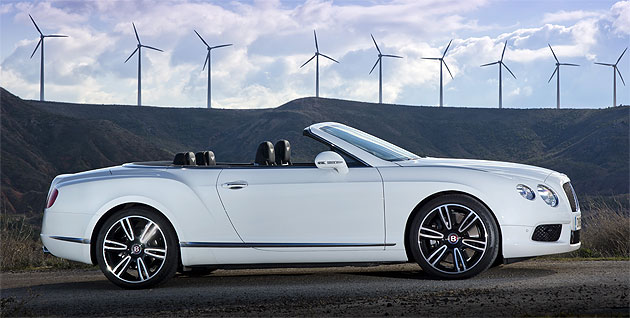 From concept to production
Prior to a vehicle entering production, a number of different design processes are undertaken. In the styling studio, Bentley works in six independent teams to pen the exterior and interior of a new car. Sketches are converted into six line diagrams which are presented to the company’s board, who choose four to be built as quarter sized clay models. These are again shown to the Senior Directors, who in turn, choose three which are created as a full scale clay model, a procedure even followed for the Queen’s state limousine. A silver film is then placed over the mock-up to make the car’s lines and curves even more visible. The same approval process is followed by the interiors team who are consistently working simultaneously with those modelling the exterior. The ‘jewellery’ of the car is equally as important. For example, the wheels of the Mulsanne are ‘flat’ to look as if it’s gliding past, whereas they are ‘spoked’ for the Continental GT to create a sense of speed. For a brand new car such as the forthcoming SUV, it takes around four years for it to make the transition from the drawing board to the road, whilst the evolution of an existing model, like the Flying Spur, will take just two, although the majority of body panels will change. 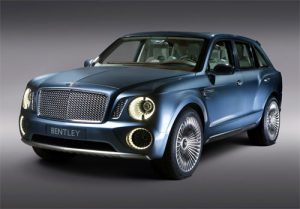 Today, Bentley’s production site, which accommodates all stages of the manufacturing process, is one square mile and is still undergoing further expansion. The arrival of the SUV in 2016 (a car designed to fulfil market demand for an SUV priced above £140,000) represents the biggest change for the plant since the Continental GT was first made. Annual total output from Crewe is estimated to reach 15,000 units by 2018, up from 1,120 in 2013, and the current biggest markets are China and the USA, with the Flying Spur proving to be the most popular model.

To assist in the generation of sales leads, Bentley runs a series of private events (called ‘Secret Britain’) which actually encourages potential customers from across the globe to visit the factory to see for themselves the level of outstanding craftsmanship and some of the customisation options available. Moreover, in July of this year, Bentley opened a brand new showroom complete with two configurator bays on the Crewe site where future owners can see the existing model line-up and sit down with their local dealer to discuss their order in state-of-the-art surroundings. No cars are ever sold direct. 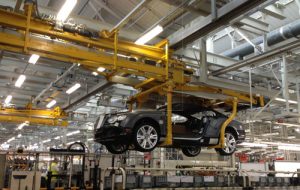 The immaculately-clean plant is split into two lines with the flagship Mulsanne having its own, whilst the remaining eight variants of the Continental GT (including the 300 Limited Edition Continental GT3-R cars which are inspired by the brand’s GT3 racer) and two versions of the Flying Spur run down another, in no pre-defined sequence. However, all vehicles are made to order and nearly 50 emerge from the end of the line every Monday to Thursday between 07:00 and 15:30. Around 75 per cent are left hand drive, reflecting the nature of the world’s roads.

With the production floor moving four inches every 60 seconds, the Mulsanne spends a total of 90 minutes in each area, whilst for the Continental GT, it’s just eight as six team members man each stage as opposed to around three for the former. Components are made available up to one hour before they are installed on the car itself in order to avoid a large stock build up next to the line.

There are over 66 million different colour combinations for the Continental GT alone based on 17 standard shades that expand to 140 for those that are available on site. However, the colour of any car can be matched to the customer’s wildest desire, whether this is a favourite nail polish, lipstick, or even as far as a bridesmaid’s dress. If there is one which is rarer and in production, Bentley will contact the dealer concerned so that they can invite the potential customer looking to opt for the same shade to physically see the car. A two-tone paint scheme, which means having the bonnet and roof painted a separate colour to the rest of the body, is also becoming increasingly popular. 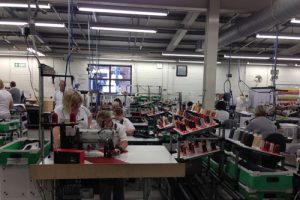 When it comes to the interior trim, the leather is decorated by a hand-sewn coloured cross-stitch, a method applied to the headrests, seats and steering wheel amongst other features. The hides themselves originate from bulls in Northern Europe (due to the absence of barbed wire fences) which are later dyed and prepared for installation. Each are five square metres in size and 14 are used for a Mulsanne, and up to 12 for the Continental GT and Flying Spur. A total of 3,000 hides are used in the Bentley factory every week and it takes up to 14 days to produce the whole trim just for one car. Following completion of the seats, the third largest component after the dashboard and engine as it houses various other parts such as motors and a lumbar support, all final creases are ironed out the leather by hand to ensure absolute perfection.

The woodwork found in a Bentley is crafted by a team whose family has worked in the same department for multiple generations, meaning that the intricate skills needed are never lost. Around 2,000 square metres of veneer are used every week and there is around £4 million worth in the system at any one time with £260,000 in the factory’s store alone. Bentley is in the privileged position of having first pick in the veneer houses ahead of any other carmaker due to the significant volume used. The most expensive timber on offer is Amboyna and other choices include Madrona, olive wood, oak, the highly popular walnut from Southern California and Sapele Pommele from South Africa. 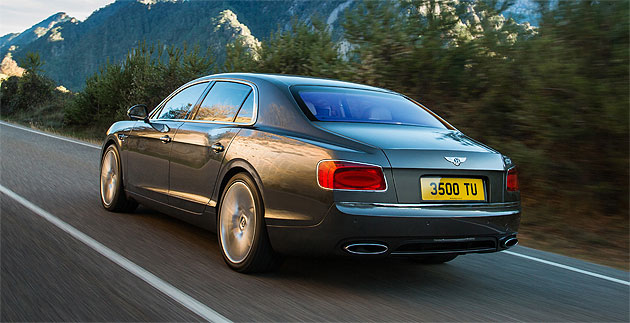 The most important factor however when it comes it to the 10 square metres of wood found in a car, which arrives in a book of 24 leaves, is that it is mirror matched, so that the left of the vehicle is identical to the right, with the same applying to the front and rear. 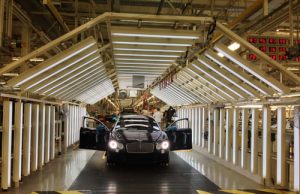 Before any model is sent for delivery, the final validation checks see an assessment of shut lines, geometry settings and a session on the rolling road where the car is taken up to 100 mph. In addition, each vehicle is tested on surrounding roads for eight miles before being polished and prepared for the final handover to the customer.

As you would expect from a manufacturer of this kind, quality is of the highest priority and there is a random daily four hour audit of any two cars to ensure that there are no defects anywhere in the production process. Furthermore, every Monday morning, 40 team leaders are gathered together so that problems are relayed directly back to the department to ensure total accountability and responsibility.

After visiting the factory, and personally experiencing what it is like to be a driver and rear seat passenger of a £169,000 Continental GT V8 and £185,000 Flying Spur, it’s simple to appreciate why the cars carry the price tag that they do, and that it is in fact entirely justified.