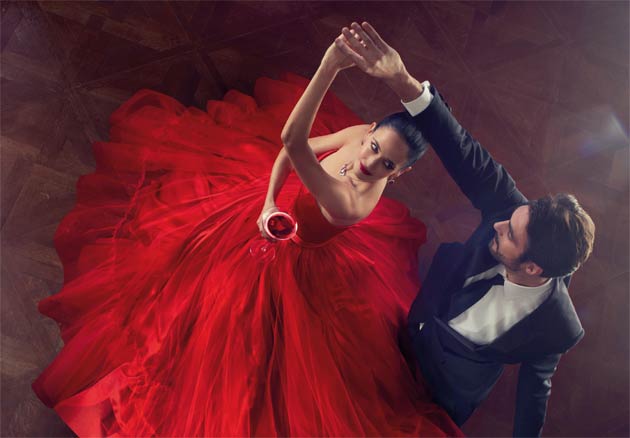 Campari® have officially unveiled the full imagery for the 2015 Calendar, entitled ‘Mythology Mixology’. 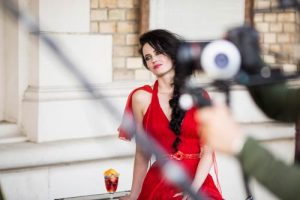 This year’s iconic Calendar, which stars the beautiful French born actress Eva Green, is the 16th edition in the collection and is dedicated to celebrating Campari’s unique and intriguing history and the intrinsic stories linked to twelve of its best-loved classic cocktails.

This year’s dreamlike imagery imaginatively depicts the beautiful and little-known anecdotes, tales and curiosities behind each iconic recipe. From the classic Negroni cocktail, created by Count Camillo Negroni himself in 1919, to the modern Campari Orange Passion, a contemporary spin on the classic Campari Orange, the Calendar explores and celebrates the recipes that have stood the test of time and are still adored in today’s modern world.

Other tales include the creation of the Americano in 1933, which is said to have been named after Primo Carnera, the first Italian to win the heavyweight boxing title in New York – to the Campari & Seltz, the most popular drink in the Bar Camparino, opened by Davide Campari himself. The bar celebrated its 100th Birthday in 2015 and this simple yet sumptuous cocktail is still as popular now as it was when the bar opened a century ago.

The Calendar was shot by Julia Fullerton-Batten, a worldwide acclaimed and exhibited fine art photographer and the first ever woman to get behind the lens on the Calendar project. Julia’s signature style, which makes use of highly creative settings and cinematic lighting, helps to visually tell stories and capture a sense of timelessness which is central to this year’s theme, Mythology Mixology. With a combination of her insightful vision and distinctive approach, Julia brings to life each and every special story behind Campari’s classic cocktails, in a contemporary and artistic way.

The dazzling heroine, Eva Green, personifies the iconic, classic and stylish nature of Campari in a series of stunning outfits created by leading designers including Vivienne Westwood, Versace, Alaia and Christian Louboutin to name just a few.

On starring in the 2015 Campari Calendar, Eva Green commented: “For me, this project was about much more than simply producing a Calendar. It was about telling a series of stories in an imaginative, creative and beautiful way – and that’s exactly what we’ve achieved. This year, those stories are closer to the heart of Campari than ever before and I personally feel very honoured to have been part of that. The 2015 Calendar is a real testament to Campari as a brand and seeing all of the stories together in one collection just proves that no matter how old these recipes may get, there will always be a firm place for Campari within our contemporary world.”

Bob Kunze-Concewitz, CEO of Gruppo Campari comments: “We have a very personal connection to this year’s Campari Calendar as it is designed to celebrate the brand itself. The theme, Mixology Mythology, is really about exploring the whole personality of the Campari brand – past, present and future. It leads Campari fans on an exciting and intriguing journey where we look not only at our history, but also project the brand into the future and together, imagine where our fascinating adventure will lead us next. Eva Green encapsulated all the passion of the brand on this year’s shoot, striking a perfect balance between classic beauty but with a very modern and contemporary attitude that reflects the versatility of the brand itself.” 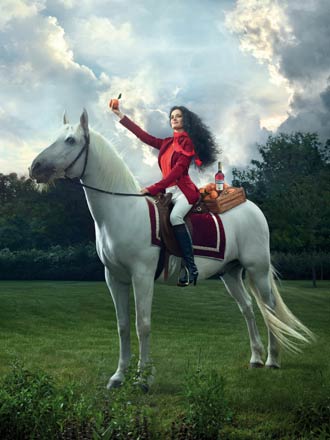 Eva was born in Paris to Swedish/French parentage. Her father is a dentist and her mother is the actress and writer Marlene Jobert. After completing her education at the American School in Paris, Eva enrolled in the Webber Douglas School for a foundation course in London which then led to a 2 year drama course at the Eva St. Paul School in Paris.

Eva began her career on stage in 2001. She starred in TUCARET directed by Gerard Deshartes and JALOUSIE EN TRIOS FAX directed by Didier Long, for which she was nominated for Les Molieres (2002) in the category ‘Revelation Theatrale Feminine’.

Her screen debut was in 2002 when she was cast as the female lead in Bernardo Bertolucci’s critically-acclaimed, THE DREAMERS. The film was shot all on location in Paris and set in the context of 1968 student riots. An homage to the great films of the twentieth century, THE DREAMERS also starred Louis Garrel and Michael Pitt. The film was premiered to huge acclaim at the 2003 Venice Film Festival and immediately launched Eva as a young actress to watch, especially as Bernardo Bertolucci described her as being “so beautiful that it is indecent”. 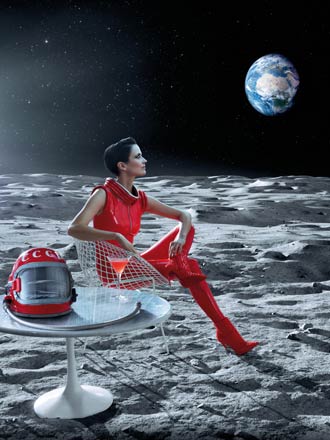 During the filming of ARSENE LUPIN in France, Eva auditioned for the female lead in Ridley Scott’s epic KINGDOM OF HEAVEN. Orlando Bloom, Jeremy Irons, Liam Neeson were already cast and Eva won the role of “Sybilla” against all of Hollywood’s competition. Filming took place from January to May 2004 in Morocco and in Spain with an outstanding cast which also included Michael Sheen, Brendan Gleeson and David Thewlis. Twentieth Century Fox released the film in May 2005 with a huge world premiere in London’s Leicester Square.

In 2006, Eva starred opposite Daniel Craig in CASINO ROYALE – the 21st film in the James Bond franchise. Eva played “Vesper Lynd”, a mysterious blend of vulnerability and strength. She becomes indeed the only woman that James Bond ever truly loved. Eva played the role to huge critical acclaim and was hailed by the British press as “the best Bond girl ever” although the role is far from the stereotype of a “Bond Girl”. The film was directed by Martin Campbell and also starred Dame Judi Dench, Jeffrey Wright and Mads Mikkelsen.

In November 2006, CASINO ROYALE was premiered to much anticipation in the presence of Her Majesty The Queen in London’s Leicester Square where all the cinemas had been taken over by the film, making it the biggest world premiere in history. The release of the film saw CASINO ROYALE as not only the most successful James Bond film of all time but also a huge critical success. The film was nominated for 9 BAFTA’s in February 2007 with Eva winning The BAFTA Rising Star Award, voted for by the public. 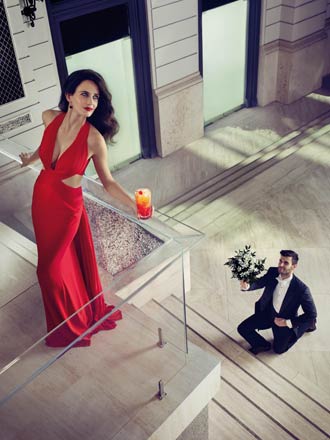 Following the world tour of CASINO ROYALE, Eva starred in New Line’s epic THE GOLDEN COMPASS which is the first in the Philip Pullman trilogy, “The Dark Materials.” An incredibly successful book predominantly for children, “The Dark Materials” premiered as a play at London’s Royal National Theatre in 2005 and the series has a cultic success in Europe as well as in America. Eva plays “Serafina Pekkala” the beautiful, good witch whose soul is hundreds of years old but her beauty is timeless. She is Nicole Kidman’s nemesis who plays “Mrs. Coulter”, the bad witch.

In September 2007, Eva was reunited with legendary British producer Jeremy Thomas in the sci-fi thriller FRANKLYN which was directed by writer/director Gerald McMorrow. The film is set in contemporary London and also stars Sam Riley and Ryan Phillippe.

CRACKS which was produced by Ridley Scott and directed by Jordan Scott was released in November 2009. Eva plays the lead role of “Miss G”, an innovative school mistress whose relationship with one of her pupils becomes somewhat unorthodox.

In May 2009, Eva finished shooting Benedick Fliegauf’s WOMB. The film which won the Krzysztof Kieslowski prize for script development at Cannes 2008, is produced by Razor Films whose past credits include award-winning “Waltz with Bashir”. The film which also stars Matt Smith was shot entirely in Germany and will be released in late 2010. 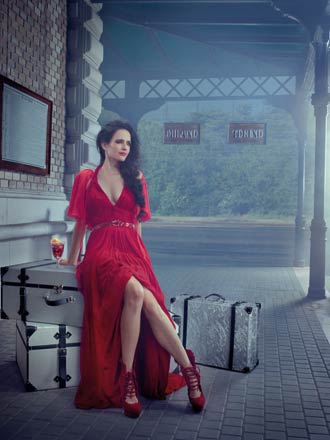 In June 2010, Eva starred as ‘Morgana Le Fay’ in the Arthurian drama CAMELOT, with a cast that included Kevin McKidd, Claire Forlani and Joseph Feinnes. The drama had been commissioned for the major US Drama Network Starz by Chris Albrecht, whose previous triumphs include THE SOPRANOS, SEX AND THE CITY and THE WIRE.

In 2011 Eva appeared in David MacKenzie’s new feature film, PERFECT SENSE in which she stars alongside Ewan McGregor.

Eva has most recently been seen in the Showtime TV Series PENNY DREADFUL which made its debut in May and sees her play lead role of Vanessa Ives alongside Timothy Dalton and Josh Hartnett. Eva has also recently been seen in the lead role of ‘Artemesia’ in 300: RISE OF AN EMPIRE, the prequel to the Warner Bros. epic 300 and in August will be seen starring in the Sin City prequel SIN CITY: A DAME TO KILL FOR. In this Eva stars as femme fatale ‘Ava Lord’ living amongst some of Sin City’s deadliest residents played by Josh Brolin, Mickey Rourke and Joseph Gordon-Levitt.

Another of Eva’s recent projects, thriller WHITE BIRD IN A BLIZZARD, recently premiered at this year’s prestigious Sundance Festival. Eva plays ‘Eve Connor’, the mother of Kat Connor (played by Shailene Woodley) in the story of a young woman’s life that is thrown into chaos when her mother disappears. Last year Eva filmed western drama THE SALVATION in which she stars as ‘Madelaine’ alongside Mads Mikkelsen and Jeffrey Dean Morgan and premiered at the 2014 Cannes Film Festival.

The Campari Calendar, of which only 9,999 copies are printed, will not go on sale but will be internationally distributed to friends of Campari around the world.