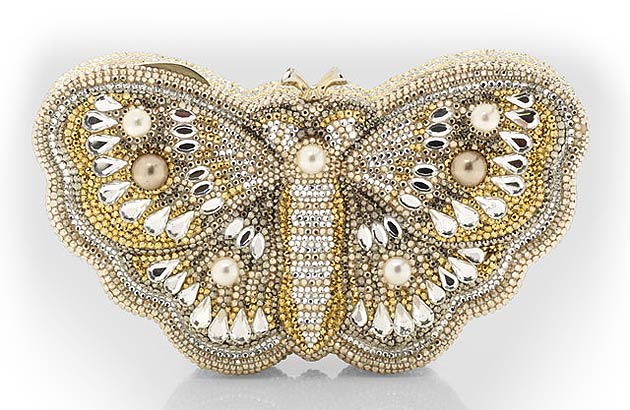 To own a Judith Leiber minaudière or clutch is akin to owning a Patek Philippe watch or a Bentley.

It is a statement to say that not only have you arrived but you possess taste, class and that certain je na sais quoi.

To some ladies who lunch and dames who dine, no evening gown will be complete unless you are carrying a Judith Leiber bejewelled minaudière to a black tie event or a charity ball. A work of art or a whimsical sparkling accessory? It’s probably both as some people are avid collectors of Judith Leiber’s crystal encrusted creations, be it in the shape of a starfish, cupcake or the Empire State Building.

Definitely not for the shrinking violet, the women who clutch a Judith Leiber minaudière commands attend from the moment she steps out. Glamorous and eye catching, a dazzling Judith Leiber number is an attention grabber and conversational piece, never mind that it might only have enough space for a lipstick and your keys.

Immortalised in the first Sex and the City movie, the pink and gold jewel-embellished Judith Leiber cupcake minaudière played a pivotal role in the movie – it was in the scene where Lily, Charlotte’s daughter picks up a call from Mr. Big on Carrie’s mobile phone and then places the phone inside her Judith Leiber cupcake clutch. Mr. Big then gets a sudden case of cold feet and can’t seem to make it to the church on time. He tries many times to call Carrie, hoping she would pick up and convince him to go through with the wedding. However, Carrie’s phone is inside Lily’s Judith Leiber cupcake minaudière and his calls go unanswered. This of course leads to Mr Bing not showing up for the wedding and Carrie being humiliated and stood up at the altar.

In 2011, Judith Leiber appointed Jana Matheson as the Creative Director, having first taken the helm as the luxury brand’s Design Consultant. Possessing an eye to navigate through the trends and creative prowess to keep the brand evolving whilst remaining true to the Judith Leiber heritage of meticulous craftsmanship, Jana has succeeded in steering the brand to new heights and also courted a younger generation whom, just like their mother before them, have an inexplicable penchant for these usable works of art.

Few would have known that these iconic bedazzling creations today started off as a mistake when the founder, Judith Leiber in 1966 places an order for metal bags from Italy and they arrive in New York damaged and dented. Not wanting to make a fuss or throw them away, Judith uses her creative flair and ingenuity and decides to decorate them with a variety of Austrian crystals her husband had purchased. The result took the society ladies of New York by storm and the crystal-encrusted minaudière revolutionised the world of luxury evening bags and established Judith Leiber’s reputation as an artist of handbags.

Now, whoever thought that what was supposed to be damaged goods would turn out to be an icon in its own right and even warrant its own museum?