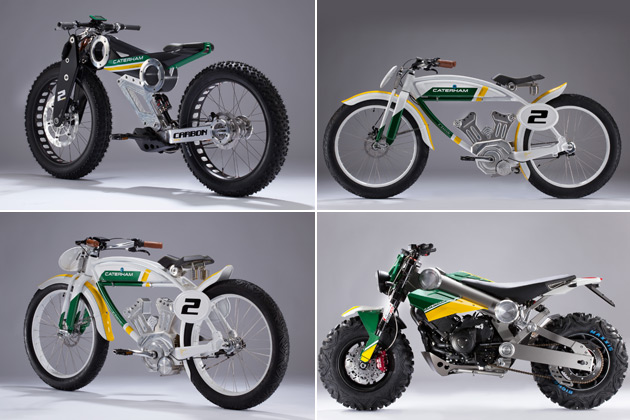 Just over one month ago, the Caterham Group unveiled their new motorcycle division – Caterham Bikes at the International Motorcycle Exhibition (EICMA) in Milan.

At the Milan show, (attended by Luxurious Magazine’s award-winning photographer, Simone Zeffiro), the company showcased three distinct prototypes. The Carbon E-Bike, an electric bike inspired by F1 technology, the imposing Brutus 750 and the Classic E-bike, a retro-styled model all in the company’s famous livery. The launch of the bike division is a major component of Caterham’s expansion plans since being purchased in 2011 by Air Asia Founder Tony Fernandes and Dato’ Kamarudin Meranun – Co-founder of the Tune Group. The motorcycle division joins Caterham F1 Team, Caterham Racing (GP2), Caterham Technology & Innovation, Caterham Composites and the latest arm, Caterham Moto Racing Team, in the rapidly growing Caterham family.

The motorcycle division will utilise the experience and strategy employed successfully by Tony Fernandes and Dato’ Kamarudin to make budget airline AirAsia the most profitable in the world, along side the two Asian business minds, Caterham Bikes has also allied itself with some of the brightest motorcycle entrepreneurs in Europe and Asia.

The new division will be spearheaded by Al-Ishsal Ishak as CEO. Ishsal was previously at AirAsia in the role of Group Head of Ancillary Income. The management team is further strengthened with Chief Designer Alessandro Tartarini, Chief Engineer Zeno Panarari, both known for their entrepreneurial spirit and product development prowess, along with businessman and ex-MotoGP racer, Andreas Leuthe who will head up the distribution and sales function.

Production of the three current prototype bikes will begin as early as Spring 2014, with the Brutus 750 the first to be built, followed by the two electric bikes later in the year.

The Caterham Bikes business strategy caters for the growing global demand for environmentally-friendly and multi-purposed, two-wheeled vehicles. Beginning with the European, North and South American markets, the Group’s key growth market will be in Asia, reflecting the burgeoning demand for such vehicles across those territories.

Tony Fernandes, Co-Chairman of Caterham Group, said: “Our vision for Caterham Group has taken another step forward with the launch of Caterham Bikes. Expanding our interests into the two-wheeled market is another natural progression for us and is a good opportunity to showcase the breadth of knowledge, experience and creativity we have at our disposal across the Group, now in the two-wheeled world in addition to all of our other automotive, technology and innovation interests.”

Dato’ Kamarudin Meranun, Co-Chairman of Caterham Group, said: “Taking Caterham into the motorcycle business has been a key objective since day one of Caterham Group. We are establishing ourselves in markets where we can bring new thinking, innovative concepts and products that will be game-changers; Caterham Bikes does exactly that. Having launched our Moto2 team recently at the Malaysian Grand Prix, the launch of Caterham Bikes takes us from the track to the road – we have partnered with industry experts and we have long-terms plans for the business that are ambitious but achievable, the perfect mix for success.”

Caterham, seem to be onto a winner with the new bike division, we ran an experiment on social media to garner feedback on one of the platforms and in the space of one day, well over 150,000 people looked at the images, voiced opinions and provided feedback. It seems that the initial visual impact of the new bikes is exactly what the potential customer base wants in vehicles of this type, however the practicality of the design was raised in some of the feedback. Knowing Caterham as we do, we’re sure that the new bikes will prove to be very popular.