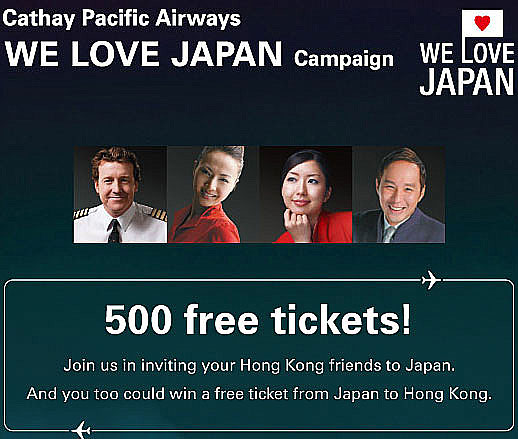 The Cathay Pacific We Love Japan is a  campaign calling on the Japanese public to invite their friends, relatives and colleagues from Hong Kong to visit the country.

A total of 500 round-trip air tickets from Hong Kong to Tokyo, Osaka, Nagoya, Fukuoka and Sapporo will be given away during the campaign as lucky draw prizes and applications are available online until midnight 30 June 2011.

A further 50 round-trip air tickets from Japan to Hong Kong will also be given away in a lucky draw to the Japanese people who participate in the campaign.

The Cathay Pacific We Love Japan campaign which was launched in Tokyo, was developed to support the ongoing efforts to promote and reinvigorate tourism to Japan after the earthquake and subsequent tsunami hit the country in March. It also aims to restore confidence in the Hong Kong public to travel to Japan.

Cathay Pacific General Manager Japan, Simon Large said,“Our deepest sympathies are with those who have been so greatly affected by the Japan earthquake and it is important that we play our part in the efforts to rebuild the country and the tourism sector. We are proud that Cathay Pacific has been connecting Japan with Hong Kong for more than 50 years and I hope that the Cathay Pacific We Love Japan campaign will help strengthen the strong bonds of friendship that already exist, particularly at this difficult time,” Simon added.

Visitor numbers to Japan have seen a significant decline over the past months and efforts are being made by the tourism industry at large to encourage tourists to return to Japan especially given the important role that tourism plays in the country’s economy.

Mr Large added: “Hong Kong has been one of the most popular destinations for Japanese travellers for many years and likewise, Japan is top of the list for the Hong Kong travelling public. By asking people in Japan to invite their Hong Kong friends to visit, we are giving everyone an opportunity to provide a boost to the country’s tourism sector and help bring more visitors back to Japan to experience the delights this country is so well known for,” Mr Large said.

Visitors from Hong Kong will also be encouraged to share their travel experiences in Japan via Cathay Pacific’s social media platforms.

How to get a Cathay Pacific We Love Japan campaign ticket

For a chance to get a free We Love Japan ticket, residents in Japan aged 18 or above can log on to the campaign website at www.cathaypacific.co.jp/welovejapan and complete and submit the online application form on or before midnight (Japan local time) on 30 June 2011. Winners will be notified by email by 11 July 2011 and the travel with prize tickets must be completed by 31 August 2011. Certain rules and conditions apply with the prize tickets.

Full details of the Cathay Pacific We Love Japan campaign can be found on the airline’s Japanese local website at www.cathaypacific.co.jp/welovejapan.