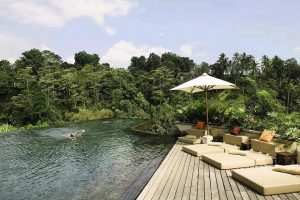 With the festive season just around the corner, talk begins of how to welcome in the New Year. Escape the crowds this year and celebrate at one of Orient-Express’ properties around the world, all of which offer luxurious settings from which to take in spectacular fireworks displays set against some of the most stunning backdrops.

At Ubud Hanging Gardens in Bali, guests can experience a very typical Balinese New Year celebration. On New Year’s Eve the festivities will start with a cocktail reception set to the backdrop of live Balinese Keroncong, a traditional Balinese band incorporating the ukulele and stringed instruments. Following a dinner at the Beduur Restaurant and a performance from the children’s choir of Susut Village, the countdown to 2012 will begin with a mesmerising fireworks display over the Pura Dalem Segara temple. Prices for the dinner start from £61 per person. Rates for a Riverside Deluxe room at Ubud start from £317 including VAT per room per night including daily breakfast. 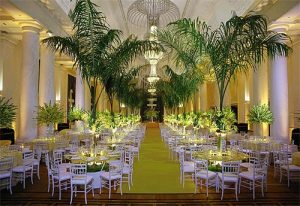 Occupying prime position on Copacabana beach in Rio, Copacabana Palace is located in the heart of Rio making it a glamorous venue to enjoy one of the world’s most exciting New Year’s Eve parties. Whether opting for the six-course dinner at the Cipriani Restaurant or for the party taking place in the Noble and Garden reception rooms, guests are in for a treat with an uninterrupted view of the spectacular Rio fireworks from the beach-facing balconies of the hotel. After the display, the party will continue on into the night, with fabulous Brazilian cocktails being served whilst the DJ spins his decks. Ticket prices start from £628 per person and rates for a City View room booking with the New Year package start from £3,382 for a minimum of five nights.

Already a firm fixture with the fashionable ‘in-crowd’ of Cape Town, The Planet Bar at Mount Nelson Hotel is the place to see and be seen this New Year’s Eve. At this elegant ‘Sex and the City’ inspired bar, the party doesn’t get going until midnight, so guests can watch Table Mountain light up with fireworks from the bar’s terrace, and then move inside for cocktails and champagne where the party won’t stop until late. Entry to the Planet Bar is complimentary. Rates for a Superior Room start from £597 per room per night including tax and daily breakfast. 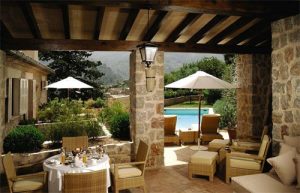 To keep the festive spirit going after Christmas, hop on a two hour flight to Mallorca where La Residencia, in the artisan village of Deia, has created a very special New Year’s Eve experience. Guests can take their time to enjoy a long and indulgent New Year menu at gourmet restaurant El Olivo. At midnight, the Tramuntana Mountains that surround the hotel will be lit up with a fantastic fireworks display that guests can enjoy from the Son Moragues Terrace whilst they sip on their champagne. The celebrations don’t stop there, with a party in the Albeniz room carrying on into the early hours of 2012. The price for the New Year’s Eve dinner and dance is £312 per person. Rates for the New Years package start from £556 per room per night, based on a four night stay.

Funchal’s firework display on 31st December is one of the most spectacular in the world, even making it into the 2008 Guiness Book of World Records for being the largest of its kind. Reid’s Palace’s enviable position nestled on the cliffs of Funchal means it boasts the best location from which to sit back and enjoy the fireworks show with a cocktail or two. After a gala dinner, revellers can dance the night away to the hotel’s house band until the early hours, and snack on Canja, a traditional Madeiran soup which will be served up at 1:30am with sandwiches for 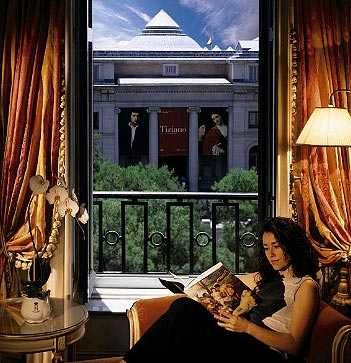 sustenance. Prices for the gala dinner start from £150 per person, excluding alcoholic beverages. Rates for the New Year Celebration package (minimum stay of 4 nights) start from £534 per room per night and include daily breakfast, one afternoon tea and one Gala Dinner.

At the Hotel Ritz Madrid, a year long schedule of events celebrating the iconic hotel’s 100th anniversary will come to a grand finale with a New Year’s Eve special gala dinner. Taking inspiration from the year in which it was opened, the hotel will be throwing a festive party in the style of the Belle Epoque. Guests will be treated to a gourmet menu of degustation delights created by head chef Jorge Gonzalez and after dinner, revellers can dance the night away in their glamorous surroundings to the sound of the grand orchestra. Just before midnight, guests will be provided with 12 grapes each which according to ancient Spanish tradition, must be eaten once the clock strikes 12 and with each toll of the clock, to ward away evil and bring good luck for the coming year. Prices for the dinner and party are approximately £603 per person and rates for the New Year’s Special package start from £842 per room per night and include dinner and buffet breakfast.