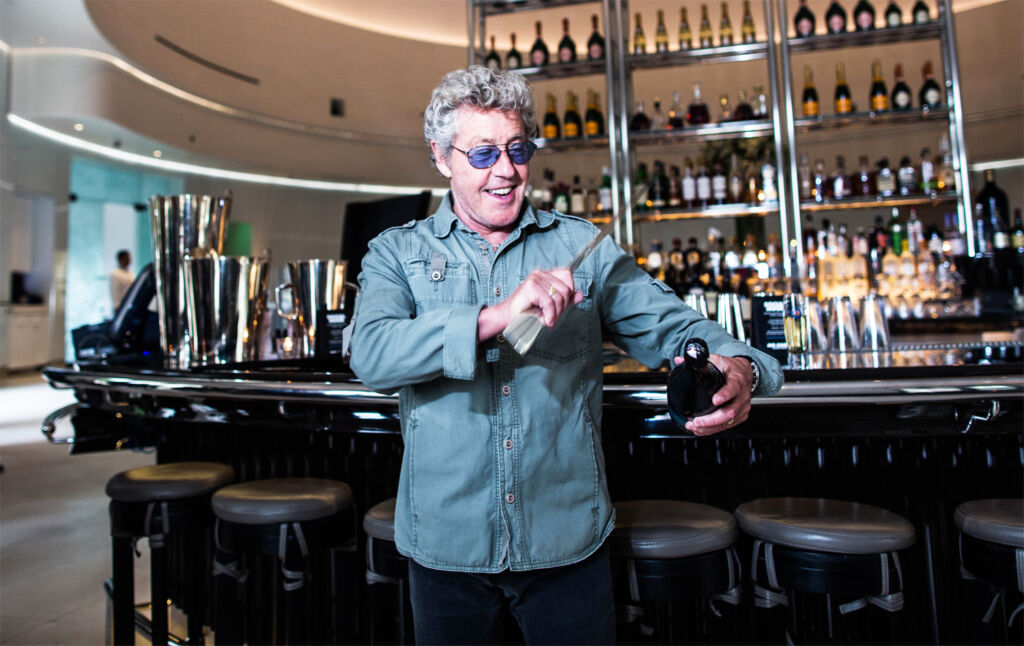 Roger Daltrey, the frontman for the iconic rock band, The Who, has once again expanded his incredible repertoire. After influencing generations through his words, acting and music, he is now pouring his creativity into Champagne Cuvée Roger Daltrey in partnership with Eminent Life.

Who would have thought that a boy from a working-class family in London’s East Acton would’ve gone on to influence huge swathes of modern society?

Not only did Roger Daltrey do this, but he is also continuing to do it today by moving into the luxury drinks market with Champagne Cuvée Roger Daltrey. 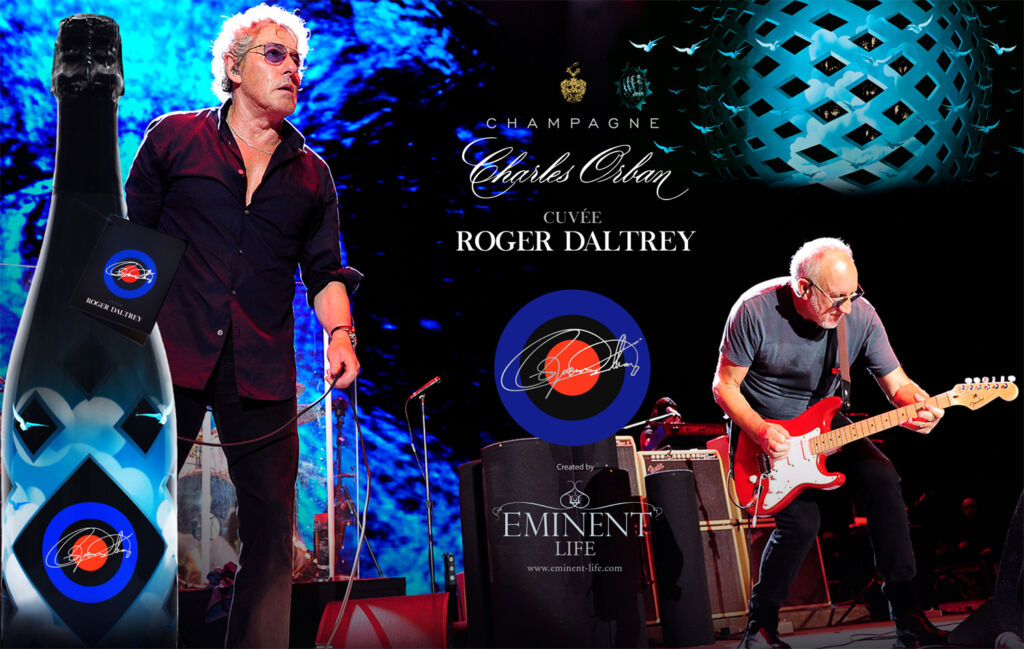 Roger Daltry is a man of seemingly endless talent and creativity. Before we take an in-depth look at his new passion, let’s imagine what his teachers might’ve thought when he sat down for some career advice.

Teacher: “Entwistle, you need to grow up and start being more realistic. On your way boy… Next!”

(Roger is sat outside the office on a wooden chair and stops John on his way out to check how the ‘land lies’.)

John: “It was a waste of time; it didn’t matter what I said, he wouldn’t have it and kept trying to put me down. I told him he doesn’t understand our generation, which wound him right up! Good luck, mate, your gonna need it.”

Teacher: “Daltrey! Right… take a seat. I’ve just wasted five minutes of my time with one of your cohorts who spouted a list of completely unrealistic goals. Unlike ‘Mr Head in the Clouds’, I hope you’ll be a bit more sensible when it comes to life after school? I know you’re a bright boy; what are ‘you’ planning to do when you leave us?”

Roger: “Well… Pete, John and me are gonna write songs and make music that’ll change and influence the world. We’re also going to start a fashion trend and I’m going to make a million pounds and date models. People are going to call me the God of Rock n Roll. I’m also gonna be a movie and TV star, write books and have books written about me.”

(The teacher’s face begins to twitch, and he starts coughing and spluttering as his face reddens.)

Roger: “Oh, I almost forgot, I’m also going to be honoured by the queen, get a degree and have my own brand of champagne!”

Teacher: “Get out! And tell Townshend not to bother coming in!”

Six decades later, Roger Daltrey has not only achieved all of the above, he is still adding to his legacy. 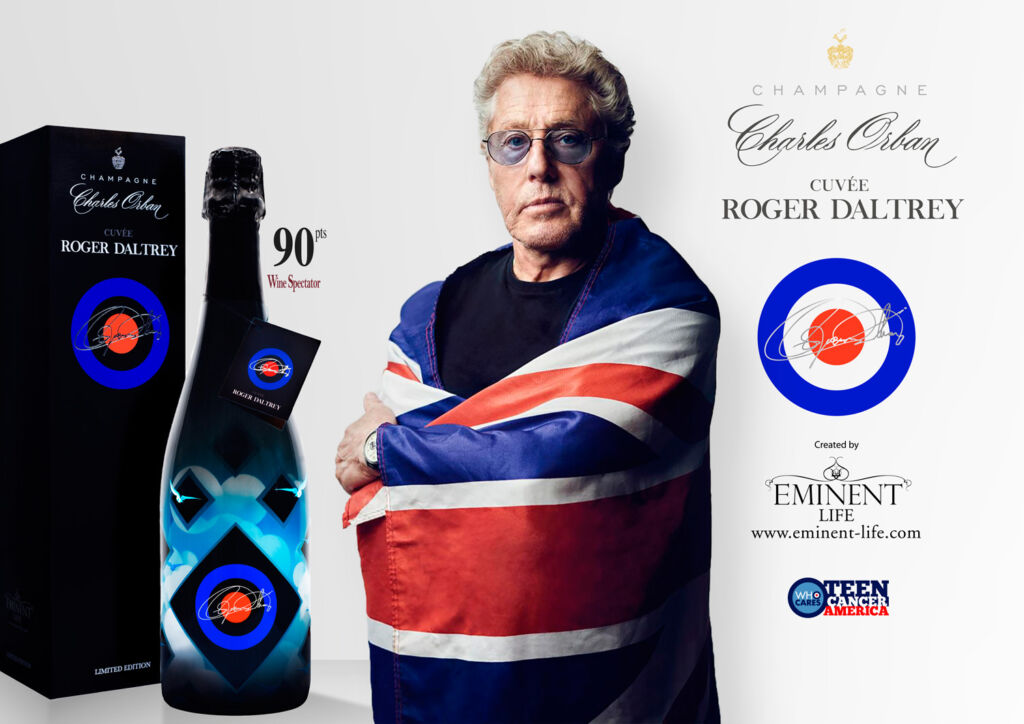 The story behind Champagne Cuvée Roger Daltrey
The Champagne was produced by Charles Oban Champagne, a family-owned vineyard in the heart of the Marne Valley in Troissy, who’ve grown grapes since 1770.

Champagne Cuvée Roger Daltrey is the result of a partnership with Eminent Life, a company specialising in celebrating excellence in music and the arts through limited edition drinks.

Eminent Life was founded in 2014 by Jerome Jacober. The company first came to global prominence through its tie-up with the British band UB40, which resulted in a brilliantly named and limited edition ‘Red Red Wine’.

Eminent Life’s latest foray into the arts is Champagne Cuvée Roger Daltrey, which is a celebration of The Who’s 50th Anniversary and since then has won consistent praise around the world.

It received the Gold Medal Vinalies Internationales and the Seal of Approval by the Tasting Panel at the Japan Wine Challenge and in addition to this, the Wine Spectator gave it a rating of 90, which equates to outstanding.

As with anything Roger Daltrey puts his name to, attention to detail is paramount, and Champagne Cuvée Roger Daltrey is no different. Before any thoughts of launching it was born, it went through a rigorous testing period lasting three years with Daltry involved with every stage. 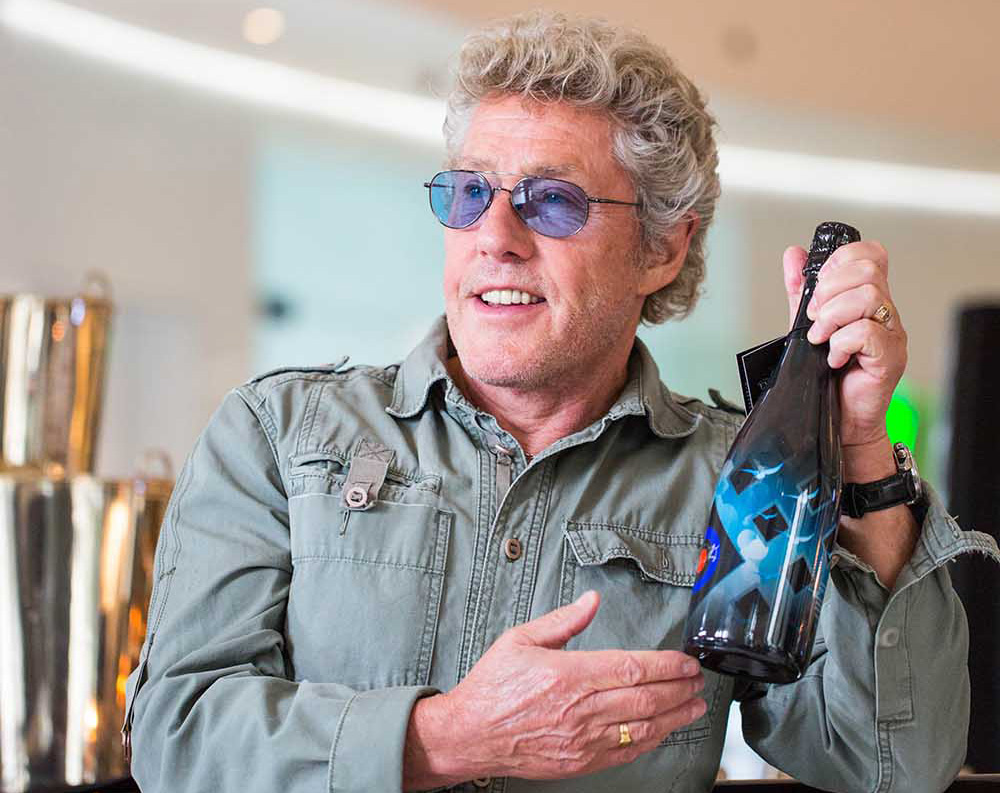 Roger said, “I am very excited to have the opportunity to express my passion for Champagne through this limited edition cuvée. I hope you enjoy it as much as I do.”

The grapes used to make the Champagne are a blend of Pinot Noir, Chardonnay and Pinot Meunier, all of which were aged for five years before being brought to the market.

These three varieties have produced a Champagne with a delicate note, creamy texture and fine lively bubbles. The Champagne has hints of fudge, citrus fruit, subtle notes of honey, brioche aromas, along with notes of pine nuts and light tobacco. 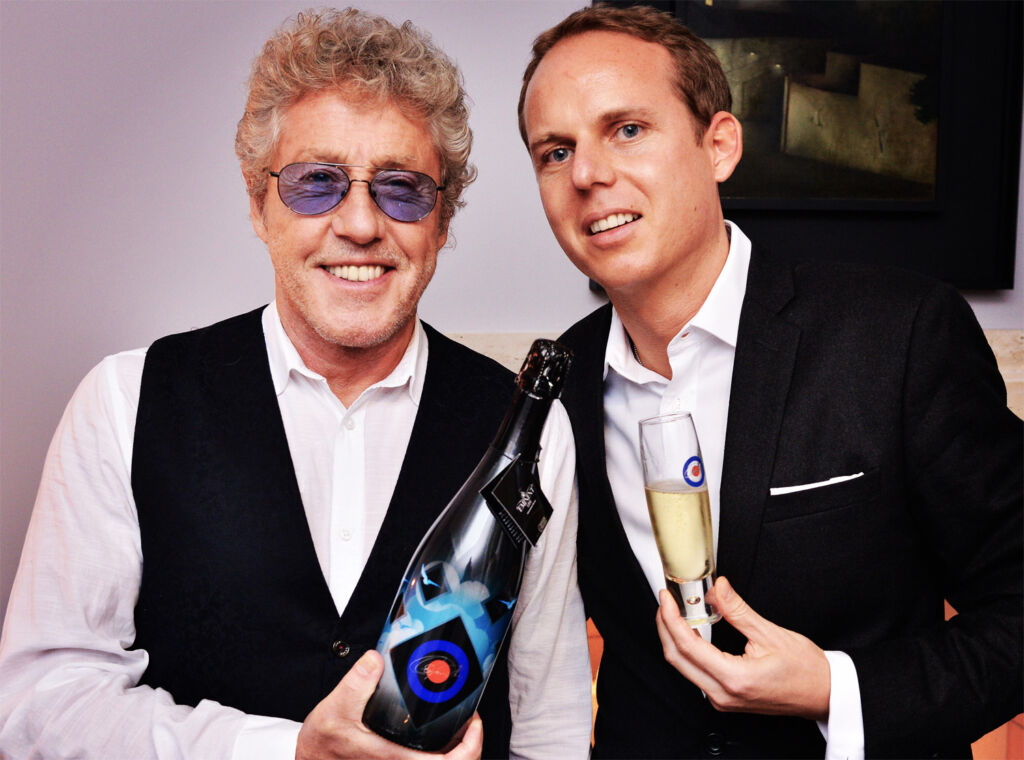 Jerome Jacober, the Founder and CEO of Eminent Life, said, “We are delighted to be celebrating half a century of rock’ n’ roll for one of music’s most iconic bands by producing a limited edition premium champagne. We’re thrilled with its success so far and the much-needed money it is raising for Roger’s charity, Teen Cancer America and Teenage Cancer Trust.”

Teen Cancer America
Roger Daltrey has an astonishing resume, and it has become even wider with Champagne Cuvée Roger Daltrey. There’s also another thing that you can add to that extensive list, and that is ‘The Ultimate Nice Guy’—Roger will be donating all of his profits to Teen Cancer America, the charity he and Pete Townshend founded. 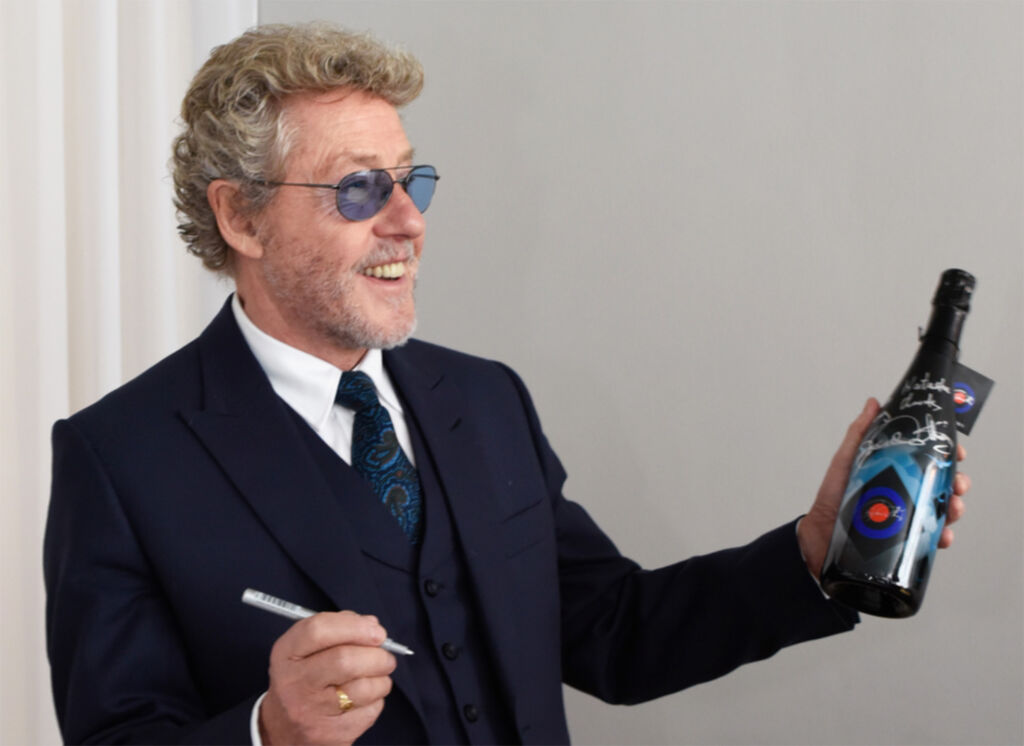 I was thrilled to receive a bottle with two glasses in the post. As with much of what is sent to me at the magazine, my Champagne Cuvée Roger Daltrey set will be donated to a good cause.

I’ll admit that this particular item will be hard to let go of. I adore the packaging, bottle and glasses with The Who’s bullseye logo proudly displayed on the front. This, coupled with Roger’s signature, artwork from the album Tommy by Mike McInnerny, elevates it from a bottle of fine Champagne to drink to an object to be admired and displayed. 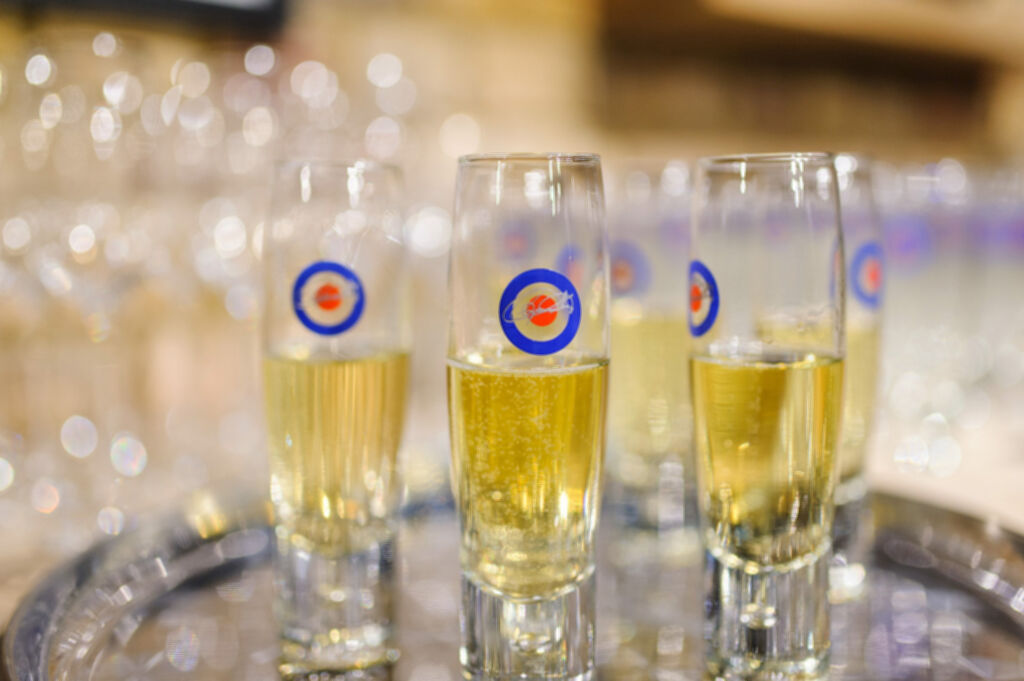 Champagne Cuvée Roger Daltrey – Where and how?

Champagne Cuvée Roger Daltrey is available for worldwide deliveries from www.eminent-life.com and is priced at £95. For something extra special, the Champagne is available with two stemless champagne glasses with the band’s bullseye logo on the front. This set is priced at £125 and can be ordered on the Eminent Life website.