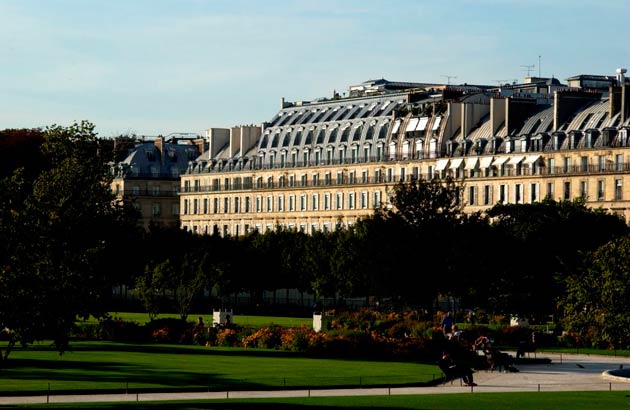 The original Parisian palace hotel for almost 200 years; Le Meurice shares its history with the history of France and evokes the ultimate in cultural Paris and Parisians. 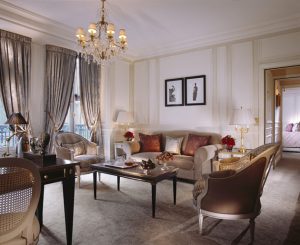 While France has made its ‘art de vivre’ one of the ultimate expressions of its culture, Le Meurice has elevated it to the rank of a fine art. Excellence in service takes on its full meaning at this Parisian institution, where it excels in the art of welcome, gastronomy and, most importantly, the art of being and well-being.

Because of the importance of “at home” feeling for guests, Le Meurice wanted to use a Parisian interiors artist as opposed to a “hotel design” company. So Charles Jouffre – famous for creating the sumptuous drapes and hangings of the Grand Foyer at the Opera Garnier – was asked to design a brand new atmosphere for Le Meurice’s guestrooms. It was agreed that the hotel’s rooms were to take on the air of an elegant 18th Century home, where past and present meet with contemporary glamour. Using 17th Century techniques as part of a contemporary and noble philosophy, he set out to reinterpret the very spirit of Le Meurice, to create the ultimate Parisian home – a style envied all around the world.

Working closely with Sandrine Chollet, Jouffre has used re-worked period furniture using a palette of light colours interjected with bright tones and a contemporary, couture approach to create a welcoming and relaxing environment for visitors to Le Meurice, where each room is unique. An artisan since the age of 16, Charles Jouffre is one of the most important names in interiors today and has created curtains and upholstery for Philippe Starck and Jacques Garcia. In 1987 he opened his own atelier and is a founding member of L’Association de Prestige et Tradition. 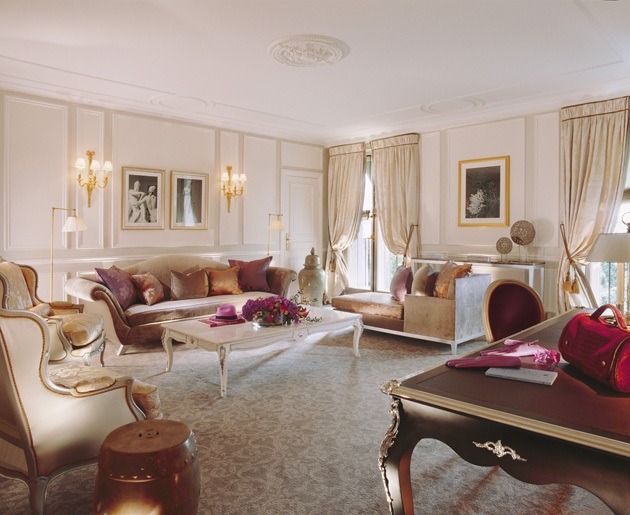 The colour scheme
Charles Jouffre draws much of his inspiration from Ingres’ red and yellow-green tones. Using light hues interjected with vivid colour, he creates harmony with a myriad of colours, including powdered gold and silver.

Materials and Trimming
The materials used have been supplied by the most exceptional French brands: Lelievre, Frey, Tassinari, and Le Manac. Jouffre uses both matt and glossy fabrics, and although traditional, the colours give them a contemporary twist. Subtle carpeting makes the rooms appear more sumptuous and warm, with soothing grey tones and beautiful fluid patterns.

The bedding
The cashmere plaids are patterned and embroidered with silver or gold threads to make the rooms feel cosy and ensure guests are comfortable. All bedding is custom-made.

The curtains
The curtains are adorned with 18th century fringes, which have also been used for the braids on the cushions. The cushions have velvet piping that contrasts with the fabric of the curtains. As net curtains did not exist in the 18th century, Charles Jouffre designed blinds to be drawn up to provide privacy while drawing attention to the elegant architecture of the window. The main curtain is to remain tied leaving a second curtain which can be drawn at night. The curtains have been laser cut – a method invented by Jouffre to ensure that the cutting is neat and seemless. Although this technique is very modern, the use of two curtains is in keeping with the 18th Century. 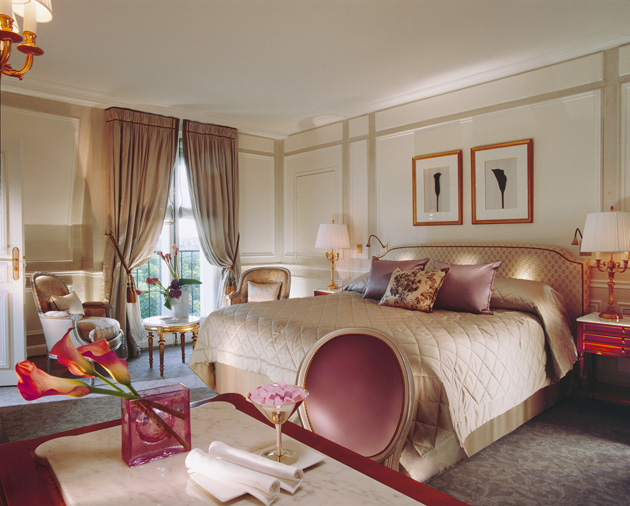 Paintings / Photos
The rooms display a series of 18th Century paintings alongside contemporary photos in blue tones that have been taken exclusively for the hotel by Sergio Giral, a Franco-Cuban photographer. Giral too plays with contrasts, and uses framing in a very contemporary way.

Personal touches
Ornaments from around the world, and from the General Manager’s private collection, have been put in each room to complement the style and furniture, in order to evoke a feel of old Paris.