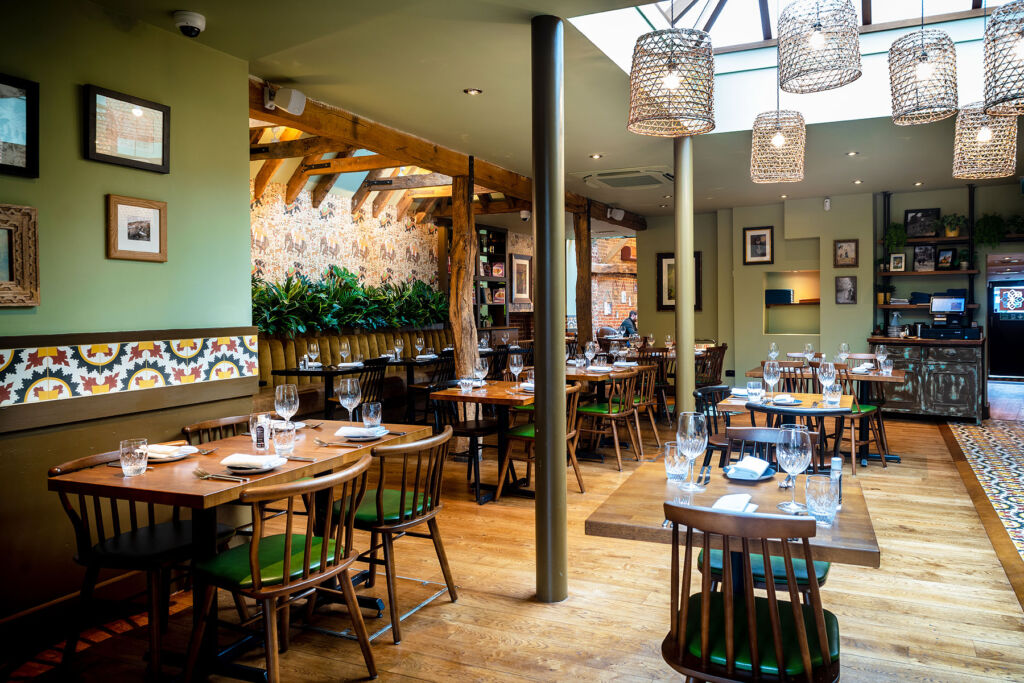 Twice Michelin-starred chef Atul Kochhar recently opened his latest restaurant in the historic market town of Beaconsfield in Buckinghamshire. The word ‘Riwaz’ translates as ‘tradition’, and we went along to taste the delights of the menu inspired by history and cultural stories and practices.

Beaconsfield is not short of some fantastic eateries to match its location adjacent to the Chiltern Hills Area of Outstanding Natural Beauty. Home to a wide area of Georgian and neo-Georgian architecture, Riwaz sits well in the Tudor high street known as the Old Town.

Riwaz has been Atul’s dream to explore new opportunities outside London now that the hospitality industry has reopened, and he wants his restaurant to be the go-to place for an Indian meal that is adventurous, traditional yet brought up to date with the modern world. 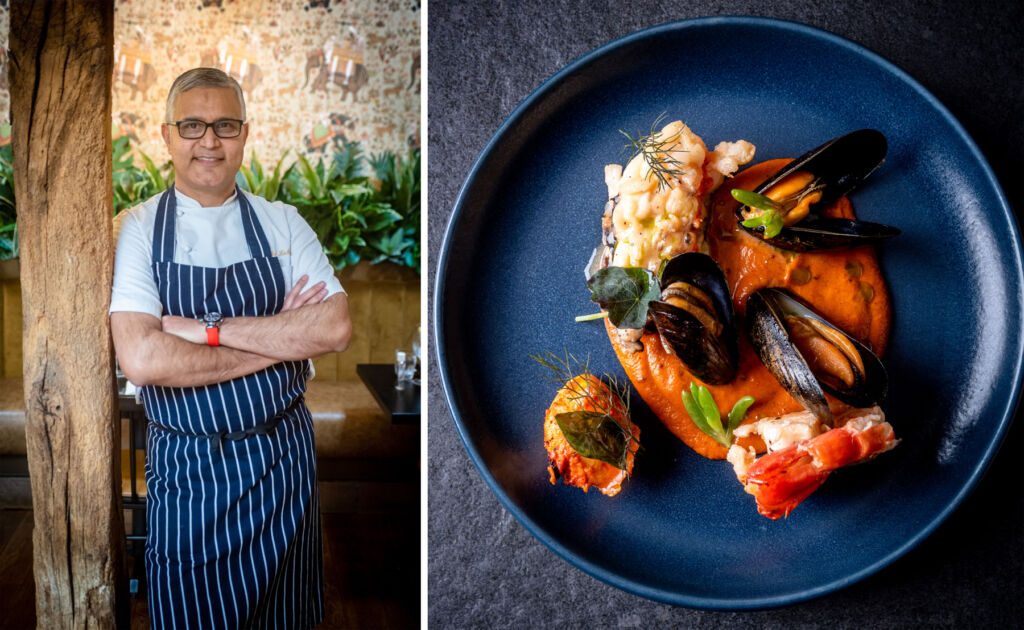 His inspiration for Riwaz stems from his experience growing up in different parts of India – Bihar, Jharkhand, Uttar Pradesh, Punjab, Tamil Nadu, West Bengali and Orissa among many other regions. And with rave reviews just two months after opening in February this year, it’s got off on a good footing with diners. 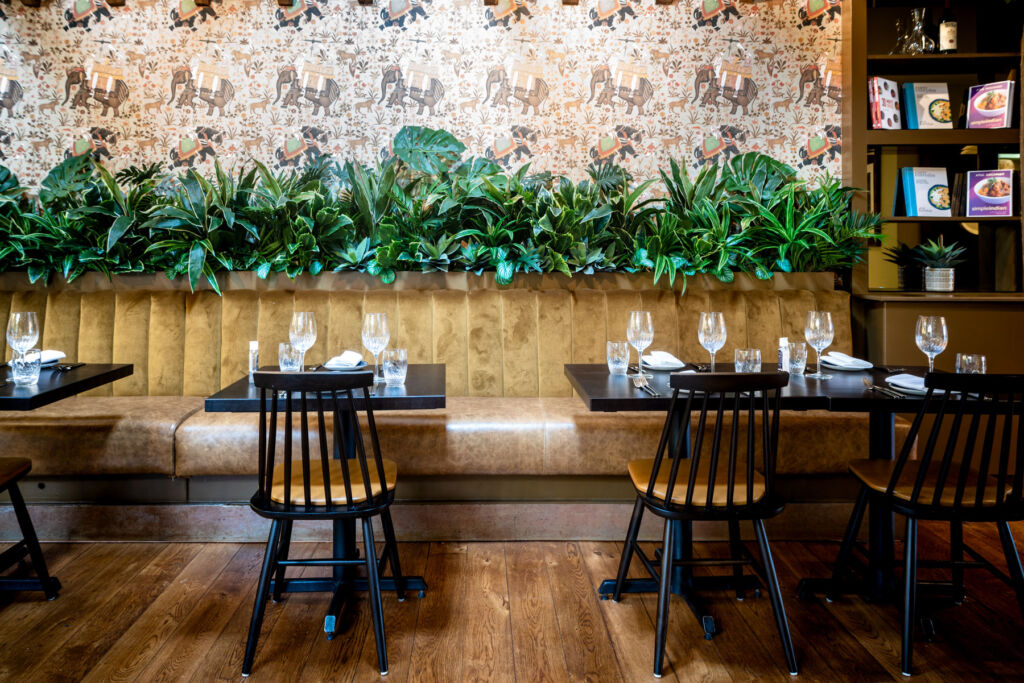 When faced with the opening of a new restaurant, I prefer to check out the tasting menu to give me a flavour of what the food is about. And it was with this mindset, my guest Jennifer and I settled for the seven-course Tasting Menu (£65pp) and sat back, relaxed and munched on the customary poppadoms (with four delectable homemade chutneys) waiting for the course while I took in the beautiful rustic charm of this building which was once home to restaurant chain Zizzi. The exposed brick walls, with a glass-covered well in the middle of the restaurant, are just some of the details here to admire. 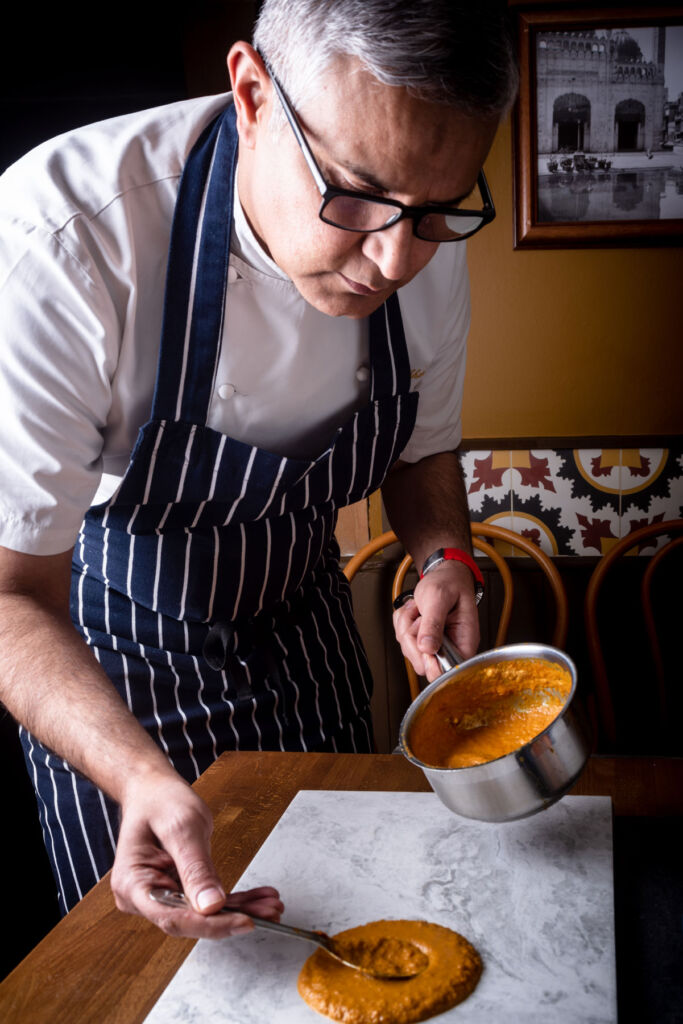 And the feast began with course one with Rampuri Daa Palak Kebab Potato (spinach – lentil cake, tomato and raisin chutney). Just a small portion, but gorgeous nonetheless. The type you wished you had more of.

Second up was Jal Pari (Tandoor seared Scottish scallop, lentil salad, spiced broccoli puree). Hands down, I have never tasted a scallop like it and believe I have had a few. Divine. Next was another delicacy from the sea in the form of Hare Masale Ki Machhi (John dory, spinach crisps, neelgiri korma). Again, I couldn’t fault it. Small and mighty, it packed a punch with many flavours.

Although we were on course four now, neither Jennifer nor I felt full and welcomed the Malai Chandi Tikka (grilled cream marinated chicken, silver leaf, bull’s blood leaf salad). Tender chicken pieces with tons of flavour. The main show was the Champen Aur Rogan Boti (grilled Lake District lamb chop & rump with black pepper and fennel), with a side of rice, fluffy naan bread and daal.

I was glad we were given the peach granita palette cleaner as I was able to dive into this mini feast of a course itself fully. And while the lamb was good, I wish I had asked for it to be cooked a tad more than the chef Gopal served up. But the accompaniments were spot on.

There are plenty of Indian desserts out there, so I was a tad confused when we were served the Textures of chocolate as our sweet. Although pretty to look at, it didn’t really compliment the rest of the meal. But with six out of the seven courses being a hit, I could hardly gripe.

We chose to stick to soft drinks with our meal, but the tasting menu comes with wine pairings for an extra cost. The bar at Riwaz also offers cocktails and customarily made drinks for those wanting to wash down their food with a tipple or two. 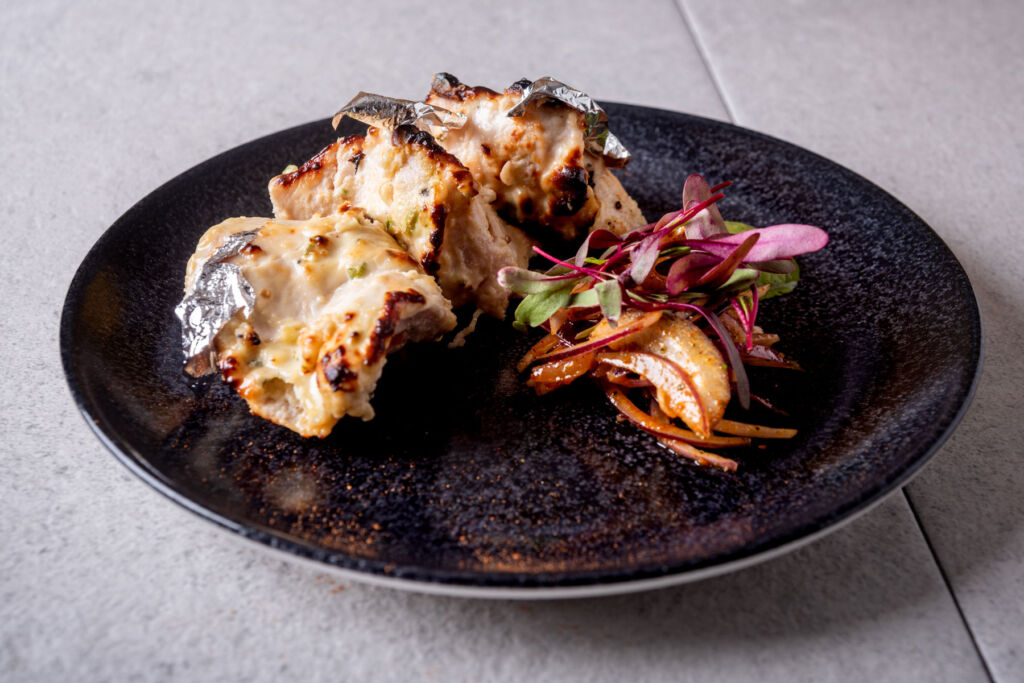 Riwaz is the latest restaurant by Atul Kochhar, which sits alongside a restaurant group that already includes the recently launched Masalchi in Wembley Park, London; Vassu in Marlow; the recently refurbished Sindhu at the Compleat Angler Hotel also in Marlow; Hawkyns at The Crown Inn, Amersham; and Indian Essence in Petts Wood, Kent. And if you don’t want to venture out, Riwaz also offers a takeaway service which will be served with a smile, I’m sure, just like it was here in this corner of Buckinghamshire.

Riwaz Beaconsfield is located on the former Zizzi site at 41 Aylesbury End, Beaconsfield HP9 1LU, and there is free street parking available in the high street. For more information, visit www.riwazrestaurants.co.uk. 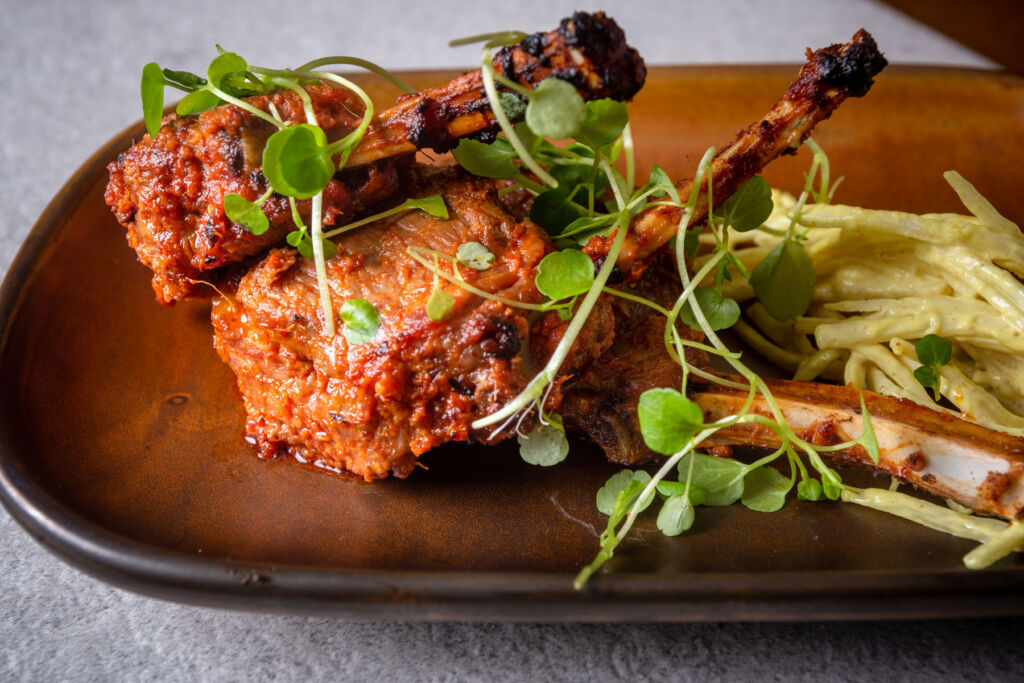