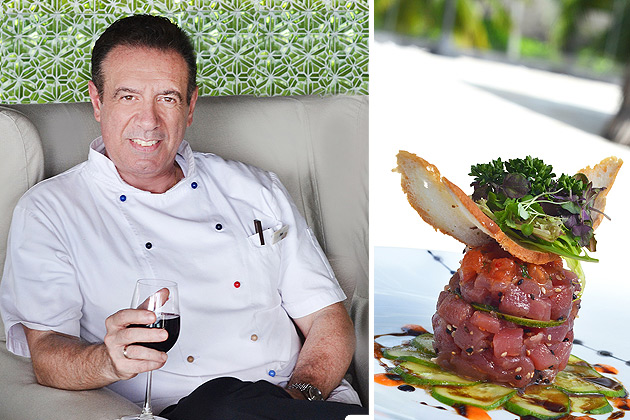 With thirty years of industry experience and thousands of miles of globetrotting travel under his chef’s hat, Chef Gaspare Greco has now landed in the tropical lushness of the Maldives, to be exact the Anantara Kihavah Villas. Previously Italian ‘Chef Sam’ (as he likes to be called) was at the Noa Japanese Restaurant & Lounge in Lebanon an eatery proclaimed by CNN Travel as the ‘Best Maldives’ Resort for Lovebirds 2012. Way before taking the helm among the astonishing beauty the Maldives, Chef Sam began his culinary career at the Toronto’s first Italian restaurant Trattoria Giancarlo before earning his Red Seal Certification from the Canadian Culinary Institute.

Being of Italian/Canadian descent and as alluded to earlier, Chef Sam’s career has seen him travel widely around the world including the Middle East, Bahamas, Canada, Europe and Asia. He has even cooked for such luminaries as Robert De Niro, Pierce Brosnan, Kim Bassinger, Louis Gosset Jr., Ray Liotta, James Woods and even the Crown Prince of Bahrain, Sheik Salman.

Chef Sam says “the opportunity to work in the Maldives was a bonus primarily for the sheer beauty of the resort, and the friendliness of the Maldivian people as well as their hospitality. It is understandable why this country is so often voted the World’s Top Holiday Destination as it is truly a beautiful place with beautiful people. Travellers can come here and savour a different dining experience every night, from a romantic dinner for two on the private beach, the spectacular lunch at Sea, the underwater restaurant and wine cellar, or a Spice Spoons cooking class, which is a true culinary journey”

Greco’s culinary philosophy has always combined two main principles: simple and fresh ingredients with his life motto ‘not to cook the food for others that he would not eat himself’.

Clean the tuna and chop its meat in small dice. Place it in a mixing bowl by adding soya sauce, wasabi powder, sesame oil, sesame seeds and olive oil mixed until the consistency is smooth. Slice the cucumber in thin slices, then dice the avocado, add lime juice, olive oil, Tabasco sauce and salt. Sautee the tomato with onions and salt, then let the liquid evaporate completely. Blend the mixture and strain it through a fine sieve. Arrange the cucumber on the plate; add the tuna tartar in the center of the plate by placing it through a round ring mold. Make another layer on top of the tuna with the avocado salsa. Finally, add the tomato sauce around the cucumber.