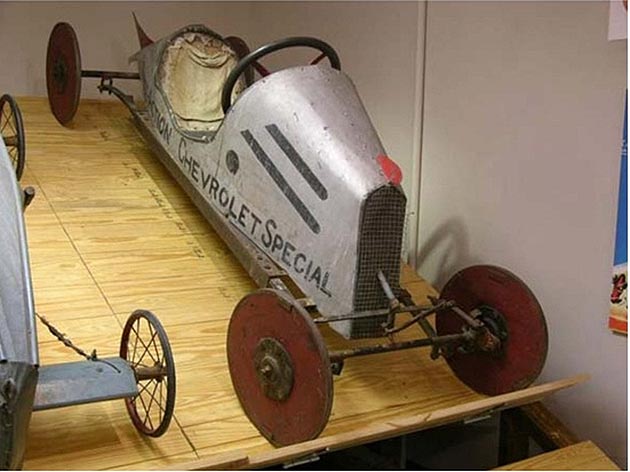 Chevrolet is to sponsor an event featuring an iconic children’s soapbox derby as part of its celebrations to mark the Corvette’s 60th anniversary year.

The Soapbox Challenge, which takes place on September 22-23 2012, will form part of the historic Kop Hill Climb event in Princes Risborough, which was revived as an annual event in 2009 after its closure in 1925.

And there’s a little known but fascinating link to the Corvette. Chevrolet’s iconic sports car was given its legendary name by a former newspaper journalist and photographer from the Dayton Daily News in Dayton, Ohio. Myron Scott’s suggestion of a ‘non-animal’ moniker beginning with ‘C’ was the company’s first choice of name for its new model, which has been in constant production ever since.

But Scott is better known in American history for creating the Soapbox derby itself, after discovering children making their own cars in his home city and covering it as a feature. He was that enthused that he went on to set up the annual Dayton Soapbox Derby, which became the first of its kind in the world. Like the event at Kop Hill, it attracted sponsorship from Chevrolet.

“Grassroots motor sport is very much part of the Chevrolet DNA,” said Chevrolet UK and Ireland Managing Director, Mark Terry. “As indeed is the pioneering spirit of great engineers. The teams that are designing the soapboxes for Kop Hill may well go on to be the innovators of tomorrow, and Chevrolet is a brand that stands firmly behind supporting talented youth.”

The Challenge is open to competitors aged 10 to 17, who will be invited to participate in the design, construction, maintenance and competition of a soapbox cart. Entrants will compete as teams with a maximum of 6 members, and the Soapboxes will be evaluated on their engineering and aesthetics just as much as their overall performance.

Chevrolet UK is the principal sponsor of this year’s Hill Climb.