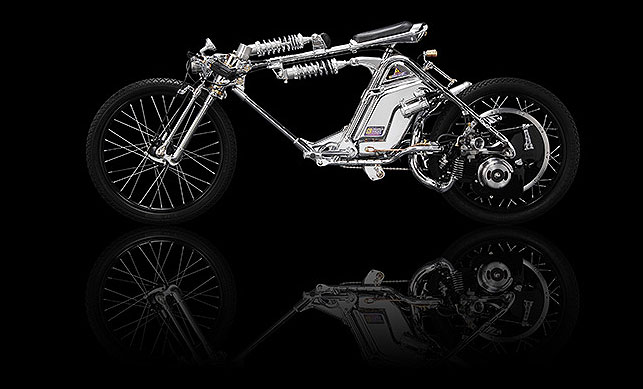 Chicara’s motorcycles are like no other. You could ride them; they could perform on the road; but these stunning works of art are much more than simple modes of transport. They are the result of Chicara’s wild imagination, combined with thousands of hours of meticulous craftsmanship carried out by hand.

“The engine is the basis,” says Chicara. “To decide the style of a bike, I start with the engine. I choose an engine and then use the details of the engine to find a style that matches.”

Chicara takes a vintage engine which he beautifully finishes and blends with as many as 500 components he manufactures himself; hand-crafted from steel, aluminium, chrome, brass and copper. The combination of the classic engine with his distinctively-styled frames, drive trains, suspension systems and steering components give rise to creations that could be described as retro-futuristic or even near-futuristic. You can browse through the gallery of Chicara Art by Chicara Nagata below.

“I do not use any so-called machine tools, any big ones,”he says. “Everything is done with hand tools, little by little. I have an assistant who works under my direction, so two of us do the work, but each bike still takes between 7,000 and 8,000 hours to complete.”

As a graphic designer by training, Chicara Nagata feels this profession ties in neatly with his passion for creating motorcycles.

“Being a designer sometimes influences how I build motorbikes and sometimes building motorbikes influences how I do graphic design,” he says. “The two have a very good mutual relationship. In graphic design, idea and hints – an opening for something new – are the most important parts of the job. How you see things and express them is the interesting part. It’s not just making something, it is realising that when I build a motorbike, I use an idea that no one has had before.” 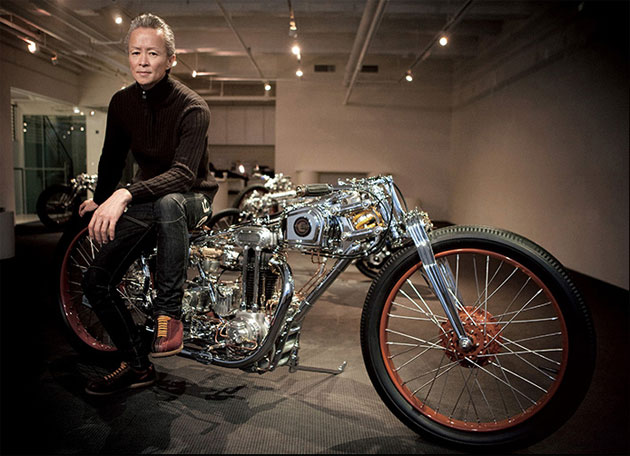 Chicara Nagata was born in 1962 in the Saga Prefecture of Kyushu Island, 18 hours away from Tokyo, Japan. At the age of 20 he became a graphic designer; a decade later he set up Chicara, Inc. graphic design agency in Saga.

“When I was a teenager, I spent all my time gazing at my older friends’ motorcycles and wanted to ride one myself,” he says. “What I really wanted was to ride a motorcycle that was all my own. That was what gave me the idea to build custom bikes.”

Chicara’s ambition to design and build his own machines was almost ruined when he was involved in a near-fatal motorcycle accident at the age of 16.

“I was told that I would not survive, but here I am still alive today,”

he says, talking about an event that turned out to be life-affirming. Paradoxically, he decided to dedicate his life to an engine that almost killed him. His art is, according to him, an expression of gratefulness to the people who donated their blood and worked to save his life… his way to give back to society:

“That got me thinking about how I could show the world that I was alive and well. I realised that making things I was good at – building a motorcycle that means so much to me – was the way I could do so.”

Chicara started creating custom motorcycles in 1993. In 2004 he took his passion one step further, elevating his work to what can be considered an art form. That marked the beginning of his Chicara Art series, which rapidly won 6 consecutive awards at shows in Belgium, Germany and France, before garnering global recognitionat the AMD Championships (the most recognized custom bike award worldwide) where he took first place for Chicara Art One in 2006 and second place the following year for Chicara Art Two, both in the freestyle class.

“I need new challenges,” he says. “If at all possible, I want to keep making a new work of art each year.”

You can read more about the MB&F Collaboration with Chicara Nagata at the MB&F M.A.D Gallery and view more images of Chicara Art at the MB&F website.