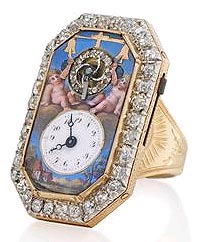 Christies Hong Kong Important Time Piece and watch auction on the 30th November will offer over 550 rare timepieces valued in excess of HK$85 million/US$11 million.  This vast selection at Christies Hong Kong features the world’s leading makers, with haute horology examples showcasing the best of fine watchmaking over the last four centuries.  In addition to a wonderful selection of vintage and modern complicated wristwatches from the 1940’s through the present day, the sale features stunning high jewellery watches, as well as a striking collection of beautifully decorated Chinese market enamels and complicated pocket watches.

The Christies Hong Kong watch auction will feature Important and Never-Before-Seen Timepiece for the Chinese Market
From the 16th century, Chinese emperors and their courtiers developed an insatiable appetite for clocks, watches and mechanical curiosities made in Europe. Pocket watches were considered valuable commodities and status symbols, luxury objects that came from the West. Entrepreneurial watchmakers from the West, or “Sing Song Merchants” as they were called, looked upon China as the new market and created designs and mechanisms especially for the Chinese market. These timepieces often came in fanciful shapes and combined horological complications with extreme miniaturization with the creative artistry of master goldsmiths and artisans. Today more than one thousand examples of such rarities still exist at the Beijing Palace Museum located in the Forbidden City.

Leading this season’s Christies Hong Kong selection of time pieces made for the Chinese market is a pistol combined with a watch and perfume sprinkler that stands as a stunning marriage of 19th century Swiss technology and exquisite craftsmanship, estimate: HK$2,800,000 – 4,500,000 / US$350,000 – 550,000).  This extremely rare piece epitomizes the creativity of watch makers in Europe to satisfy the ever-growing demands for clocks and automata by the Imperial court and its courtiers in China, as well as European aristocrats and royal families, particularly in the 18th and 19th centuries.

Another highlight at the Christies Hong Kong Important Time Piece and watch auction is a rare and previously unrecorded enamel and diamond-set ring watch with its original fitted box, circa 1810 (lot 3569, estimate: HK$700,000 – 900,000 / US$87,500 – 112,500).  Since their first appearance in the 16th century, ring watches have always been the subject of great fascination, in part because of their decorative appeal, but also for the horological tour de force needed to construct a perfectly functioning movement of such small size that it can be set into a piece of jewellery. Production of these extraordinary pieces required exceptional skills and as such they were exclusively executed by only the best watchmakers, jewellers and enamellers of the time – and naturally, such masterworks were reserved for only the most distinguished and wealthy clientele.  Only a handful of ring watches with complications have appeared on the open market to date, and all have been unique pieces in their own right.  Amongst these exceedingly scarce specimens, the present ring watch occupies a very special position: it features a particularly rare and unusual characteristic of a quarter-repeating mechanism combined with two automatons in the form of two cupids in whose arms are striking the past hours and quarters alternately on two small bells atop the dial. Moreover, not only are the bezel and the visible balance diamond-set but, for a ring watch, the dial has the exceptional feature of having a painted scene.  Previously unrecorded, this ring watch is without doubt one of the most outstanding examples of its kind to have ever come to light. 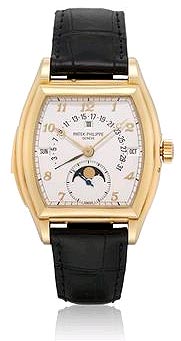 Also leading the fine watch selection at the Christies Hong Kong Important Time Piece and watch auction is the Patek Philippe Reference 2524 (lot 3585, estimate: HK$2,000,000 – 3,000,000 / US$250,000 – 350,000).  While a recent study reveals that Patek Philippe mounted different types of dial on the reference 2524, the present watch is the rarest variant of all 2524 references as it is the only known to be fitted with a two-tone silvered dial with alternating applied small baton and Roman numerals. Only 12 examples of reference 2524 are known to the market, reaffirming the extreme rarity of the present lot with this unique dial configuration which was most certainly made upon special request at the time by the original owner.

Not to be missed at the Christies Hong Kong Important Time Piece and watch auction is the rare Patek Philippe Ref. 5013 ( lot 4067, estimate: HK$2,400,000 – 4,000,000 / US$300,000 – 500,000). Part of Patek Philippe’s “Grand Complication” series, the Ref. 5013 was first introduced in 1992 and was the famed maker’s first minute repeating wristwatch featuring an automatic movement combined with a perpetual calendar and retrograde date. Indeed, at the time of its introduction, it was Patek’s most complicated wristwatch ever made.  Production of this reference ceased in 2010, and the present watch is one of only five examples in yellow gold to have ever reappeared on the market.