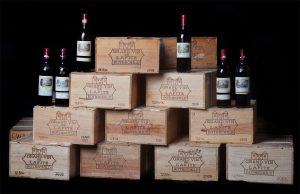 Christie’s, the world’s leading auction house, will kick off its Autumn wine sale season with a two-day sale in Hong Kong this September. Valued over HK$46 million/US$5.8 million, this superbly curated sale features 572 lots comprising an array of pristine wines from every corner of the globe. Highlights of the two-day sale include a spectacular vertical collection of vintage 1981 to 2005 Château Lafite Rothschild on 3 September, and an extremely rare 1911 champagne direct from the Moët et Chandon winery to be sold on 4 September. For wine collectors looking for wines of the rarest and highest quality, this sale is not to be missed.

Leading the first day auction is an extraordinary vertical collection of Château Lafite Rothschild (Lot 44). This twenty-five vintage vertical of Lafite-Rothschild in solid wooden cases of twelve have been carefully selected by a meticulous Hong Kong-based collector for their pristine condition and impeccable provenance. These wines have been stored in perfect condition since purchase, and will reward the purchaser with years of liquid pleasure with no doubt.

This extraordinary event is followed by an array of the finest Claret from vintages recent and mature, including a case of the 1945 Lafite (Lot 153), five bottles of Petrus 1947 (Lot 157) from an unimpeachable source, an array of wines from 1982 in solid cases just hitting their prime and many other wines as well as a pair of jeroboams of 1996 Dom Perignon direct from the winery (Lot 152). These wines have been carefully assembled from some of the leading private collections around the globe.

Our second day also opens with the best of Bordeaux, but also features a connoisseurs assortment of Burgundy wines. From Raveneau to Rousseau and Leroy, this sale has it all. There are small lots for those who’d like to sample the nuance of Burgundy as well as larger lots for the connoisseur who knows what he wants, including some Cros Parantoux Henri Jayer. This selection is bookended with a diverse series of lots that range from the Rhône, Italy and beyond. Of particular note on the second day is a generous quantity of the wines of the Domaine de la Romanee-Conti, including a number of assortment cases (1978, 1986, 2000) and solid cases of 1988 and 1989 Romanee-Conti, a jeroboam of the 1971 Romanee-Conti, and a staggering collection of full cases of ‘78s still in wood and in superb condition for its age: La Tache, Echezeaux and Romanee-St.-Vivant and many other similarly enticing lots.

Of particular note is Christie’s selection of the best of super-rare 1911 Champagne direct from the Moët et Chandon winery (Lot 519). This legendary wine will be auctioning off a luxurious LOUIS VUITTON leather treasure chest containing six bottles of Grand Vintage. The successful bidder and five guests will be invited to join an exclusive private lunch with Moët’s celebrity spokeswoman Scarlett Johansson, jointly hosted by Daniel Lalonde, President of the House of Moët & Chandon and Mark Bedingham, Regional Managing Director of Moët Hennessy Asia Pacific on 6 September. For this charity lot, proceeds will be donated to support environmental initiatives in China spearheaded by The Nature Conservancy.