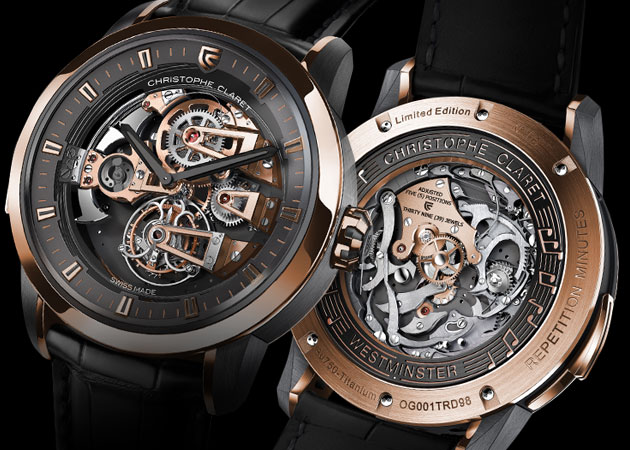 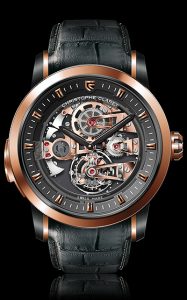 What’s more, Soprano pays homage to the roots of Manufacture Claret, which has innovated in exceptional complications, minute repeaters, tourbillons and sapphire components since its inception. Indeed, in 1997 Christophe Claret was the first to incorporate sapphire components in a wristwatch movement. Soprano has already been preselected in the top ten of the Complicated Watch category by the Grand Prix d’Horlogerie de Genève jury ahead of next month’s awards ceremony.

Christophe Claret says: “When I created Manufacture Claret over 20 years ago, the very first movement I developed was a minute repeater so the complication has always been very special to me. The melody chimed by the Soprano is as musically correct as possible.”

The Manufacture Claret team is in Mexico City this week to launch the Soprano minute repeater at the sixth edition of the Salón Internacional de la Alta Relojería (SIAR) which runs for three days from Tuesday October 2nd until Thursday October 4th. On the opening day, Mr Christophe Claret presented Soprano at a packed press conference in the Gran Salón of the Four Seasons Hotel in the Mexican capital. The watchmaker from Le Locle is also exhibiting in Suite 843 for the duration of the fair, the most important haute horlogerie exhibition in Latin America.

Later in October, Christophe Claret Chief Operating Officer Stefan Feltgen will be representing the brand during a two-date roadshow in China organized by our retail partner Elegant Watch and Jewellery Company. Mr Feltgen will be presenting the entire Christophe Claret Collection – including DualTow, Adagio, 21 Blackjack, Baccara, X-TREM-1 and our new Soprano timepiece – during press presentations and collectors’ dinners staged in Shanghai on Friday, October 19th and in Beijing on Sunday, October 21st.