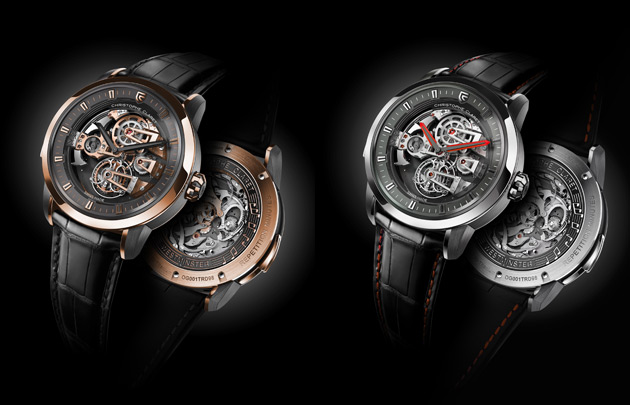 What makes the Christophe Claret Tourbillon chime like Big Ben? 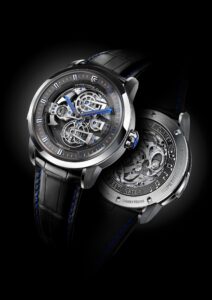 The Soprano combines traditional haute horlogerie with state-of-the-art manufacturing; the English Parliament with a French King; historic complications with modern design; aural indications with wonderful visual displays; gold coupled with high-tech titanium, and metal components with sapphire elements.
The minute repeater is considered by the world of horology to be one of the most demanding and difficult of all complications to realize. This is due to the marriage of complex technical aspects with artistic musical tonality. A minute repeater reveals the time audibly with two notes created from two small hammers striking two gongs: one note for the hours, one note for the minutes and a combination of the two for the quarter hours. Even more complex is the Clarion repeater with three notes that can play a simple melody for the quarters.
However, the nec plus ultra of the minute repeater realm is the Westminster – it’s called this due to the distinctive tune played by the Big Ben clock at the Palace of Westminster, home of the UK Government. As Big Ben strikes, a complex melody for the quarters with four hammers striking four notes on four bells rings out. To provide an even fuller and richer tome than standard repeaters, the Christophe Claret Soprano features four cathedral gongs, each of the gongs circles the perimeter of the movement twice (a normal gong goes around only once). And to further ensure that the rich sound reaches the listeners ears, the central case band is in grade 5 titanium, a metal known for its excellent acoustic properties and used in top-class musical instruments around the world.
Christophe Claret became the very first
Many years prior to the first chiming of Big Ben over London, the then King of France, Charles X was making a significant impact on art, architecture and horology. One of the defining characteristics of pocket watches created during this period were stepped bridges, which became known as Charles X bridges. King Charles spent much of his early watchmaking career restoring beautiful timepieces from this epoch, Christophe Claret incorporated these historic design elements into the Soprano Tourbillon.
15 years ago, Christophe Claret became the first to use the sapphire bridges (in a King Charles X style) and plates in wristwatch movements.
The 46mm Christophe Claret Soprano range is available on Red Gold, anthracite PVD titanium and White Gold with anthacite PVD Titanium, each limited to just eight pieces.