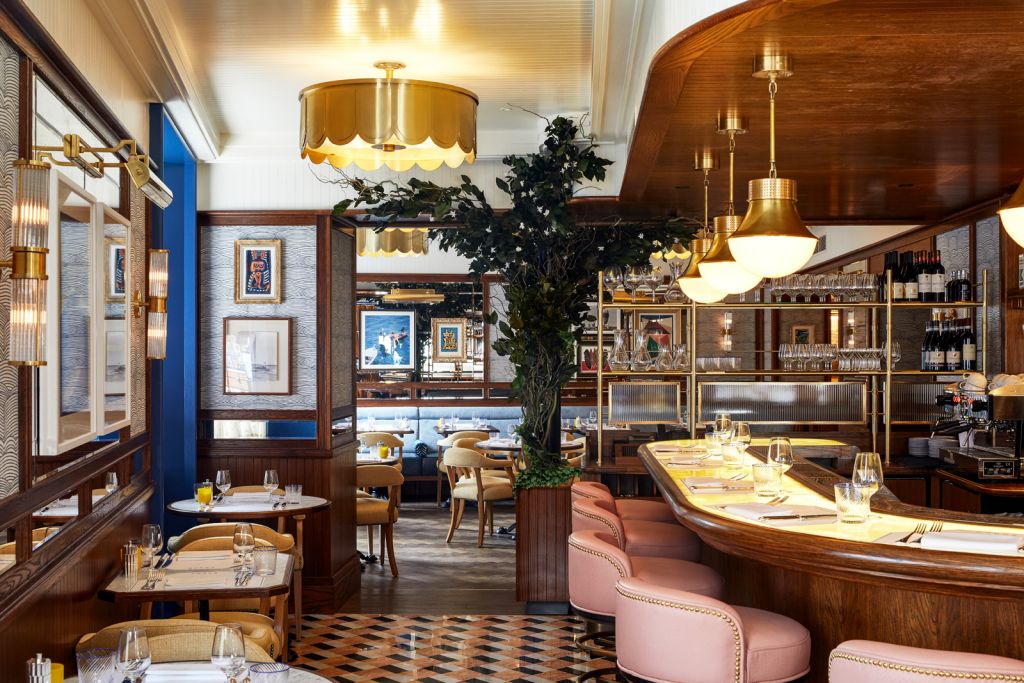 Chucs is a group of Italian-inspired restaurants and cafés dotted around London, with a total of five outlets in the Capital. Chucs Belgravia, the largest, and the flagship site belonging to the rapidly expanding business opened in November 2019. 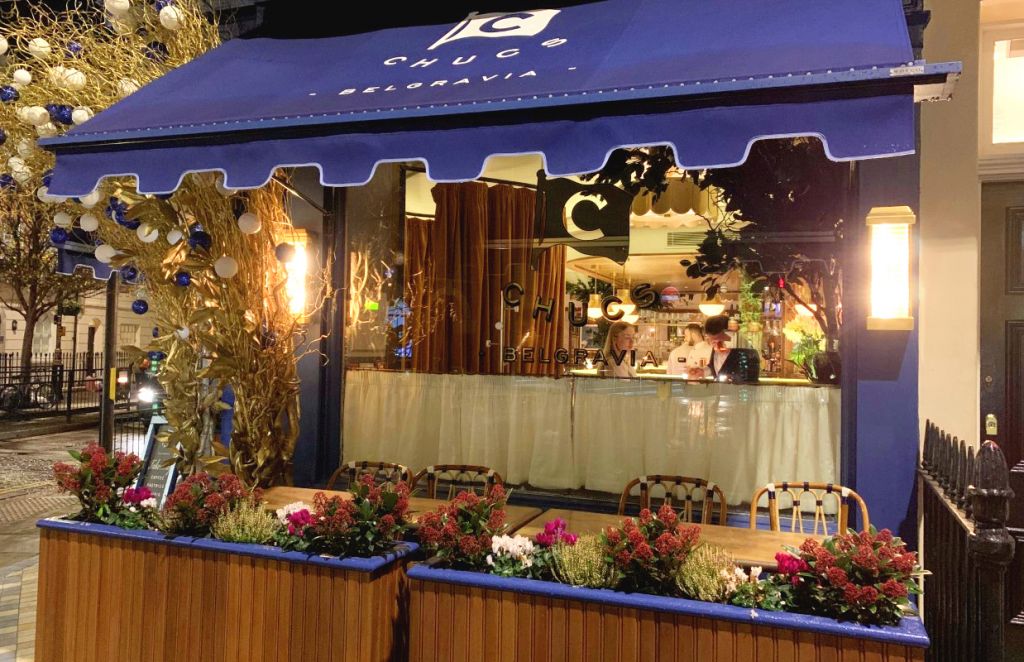 The restaurant is situated on the corner of Eccleston and Ebury Street, it took the place of La Bottega, an Italian delicatessen, and has been extensively refurbished and styled by Fetter Studios to create a classic décor using gold, pastel blue and pink tones, all inspired by the glamour of 1950s Italy. 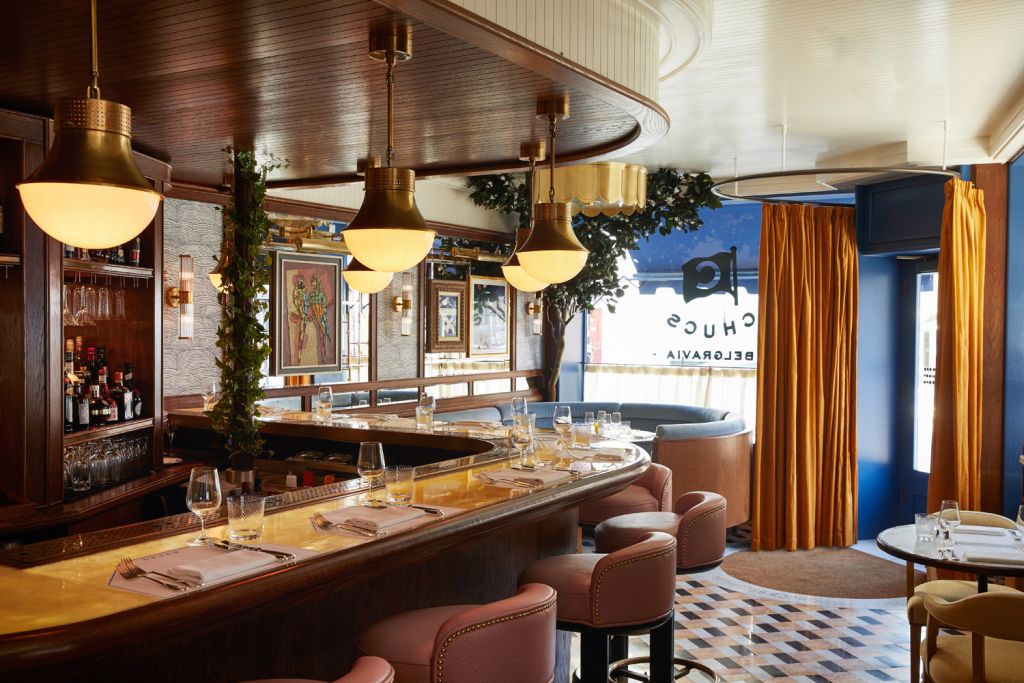 Split into two main sections – the bar at the front, and the main seating area at the back, this upmarket eatery can accommodate around 55 people at any one time, as well as several standing guests. What’s more, there’s also a private dining room at the rear, which can be turned into additional seating if further capacity is needed.

Chucs Belgravia largely attracts a local clientele, as well as individuals who stumble across it by chance. In fact, the area surrounding Victoria Station wouldn’t naturally be associated with being one of London’s great dining destinations. Therefore, Chucs would welcome more competition, as this would potentially draw more people into the area.

What’s more, this eatery is dog-friendly, meaning that pooches will not be left out in the cold whilst owners are tucking into a gastronomic feast in the warm.

This establishment is open from 8 am for breakfast, through to dinner, and also has pre- and post-theatre menus, with Thursday and Friday evenings, and the weekend, tending to be the busiest periods for Chucs Belgravia.

Overseeing the kitchen (tucked away on the lower ground floor) is Head Chef Alessandro Piludu, who previously worked at Jamie Oliver’s Fifteen restaurant in Shoreditch. In addition, the extensive 120 bin wine list is overseen by Head Sommelier Stefano Barbarino, who counts Galvin at Windows and Chez Bruce on his impressive CV.

We visited on a Tuesday night for dinner, and my wife and I were seated on the comfortable leather chairs at the rear of the restaurant, surrounded by unique pieces of art. Not being the biggest fans of wine, we were handed the drinks menu, which lists a wide array of cocktails and soft drinks to accompany one’s meal. Just being on the cusp of the end of Dry January, a refreshing lemonade and a glass of tomato juice were in order. 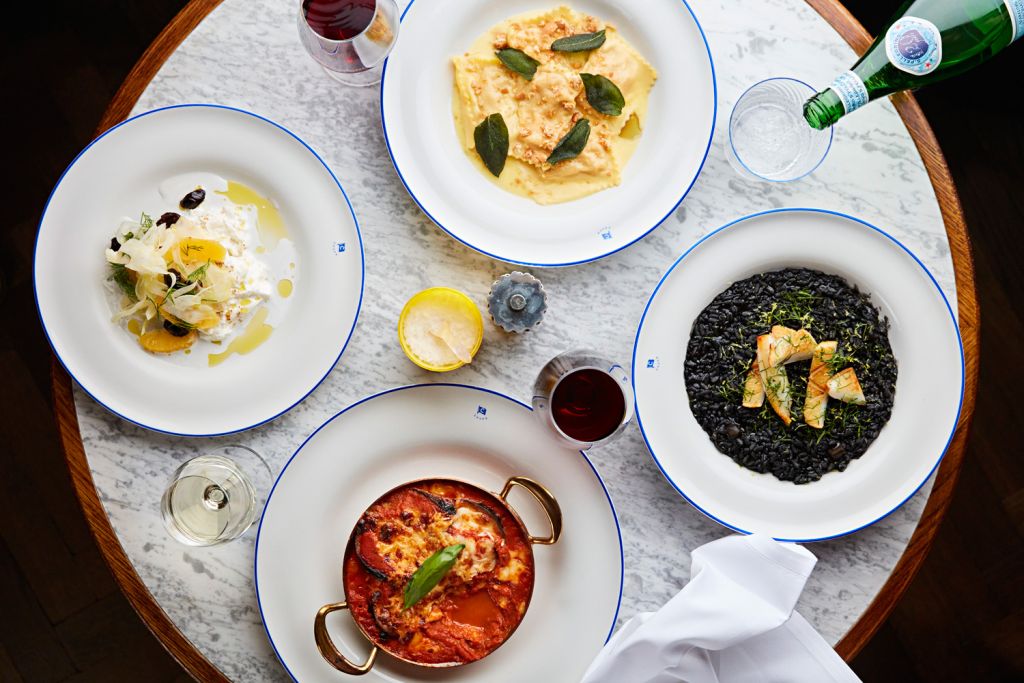 Back on to the more important subject of food, and the menu is headed by ‘Cicchetti’, which translates as small aperitif bites to kick the palate into action, such as oysters, Nocellara olives and truffle arancini. There is then the matter of having to choose which of the ten starters to go for, with Cornish crab, celeriac soup and beef carpaccio all trying to catch your eye.

Although Burrata has long been a firm favourite of mine, I decided to sample the cured organic salmon (£14) that took the form of salmon tartare lying on cubed cucumber next to sumptuous crème Fraiche. Combined with some crusty brown bread and focaccia on the side, it was heavenly, and I was suitably impressed with what Alessandro and his team had created. My other half meanwhile, tucked into some chilled and thinly sliced beef carpaccio garnished with a plethora of baby capers (also £14), another brilliantly prepared dish. 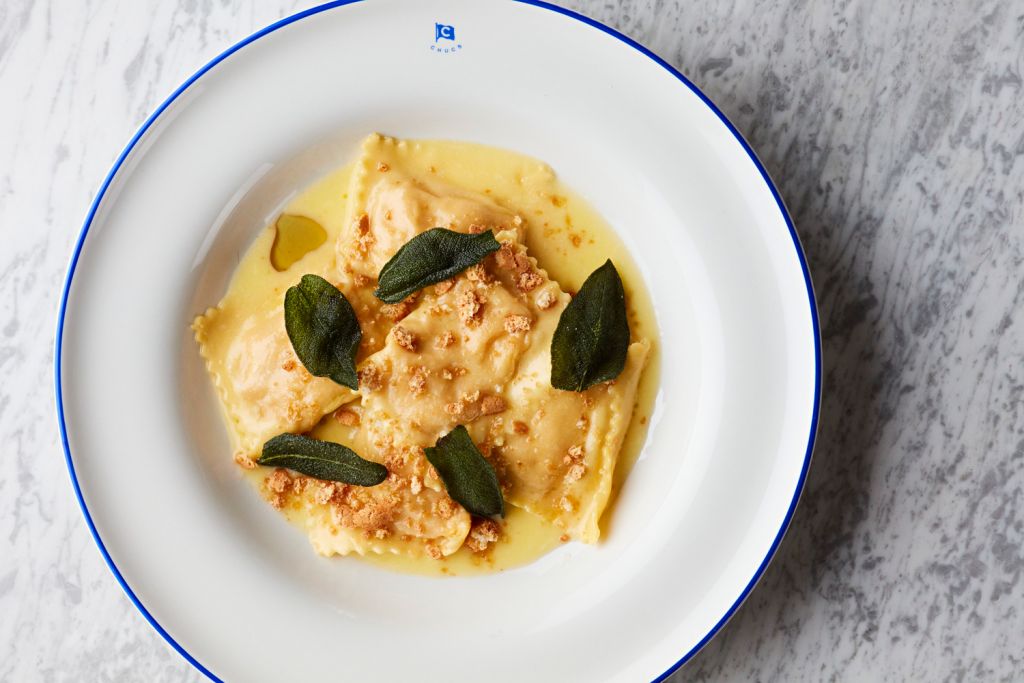 Being an Italian restaurant, there’s plenty of pizza options, rice and pasta dishes on offer, with vegetarians, fish lovers and meat-eaters all catered for. There’s everything from gnocchi to a pumpkin, sage and Amaretti ravioli, but my taste buds were tempted by the piping hot Melanzane Alla Parmigiana. 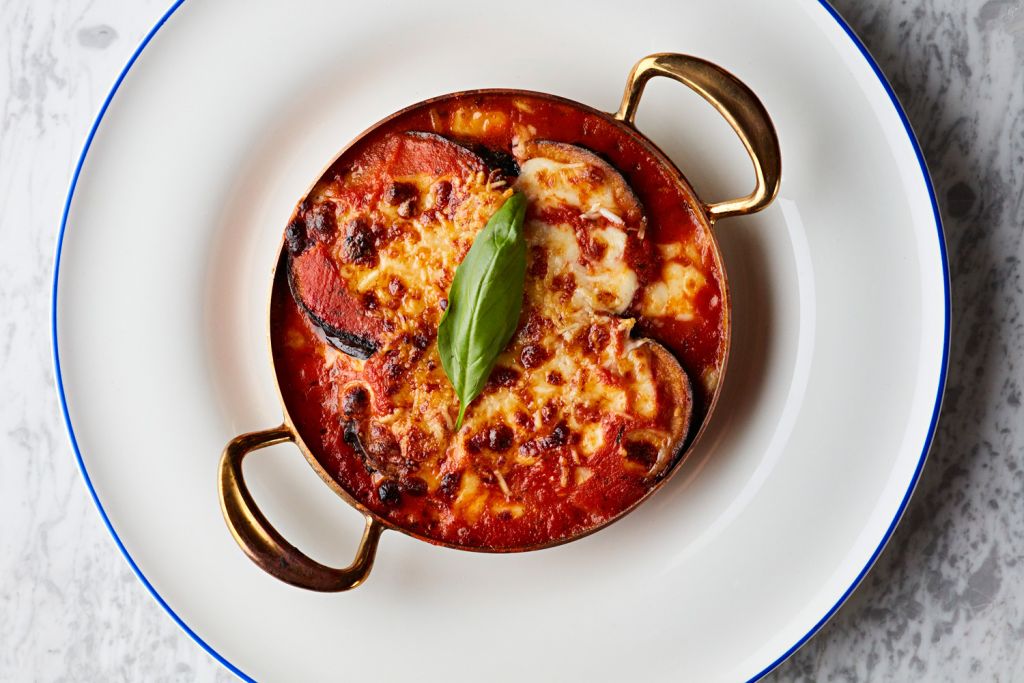 Featuring a delightful tomato sauce and melted cheese, the layers were very soft in texture, and the flavours were nicely balanced as I made my way through what was a generous portion. 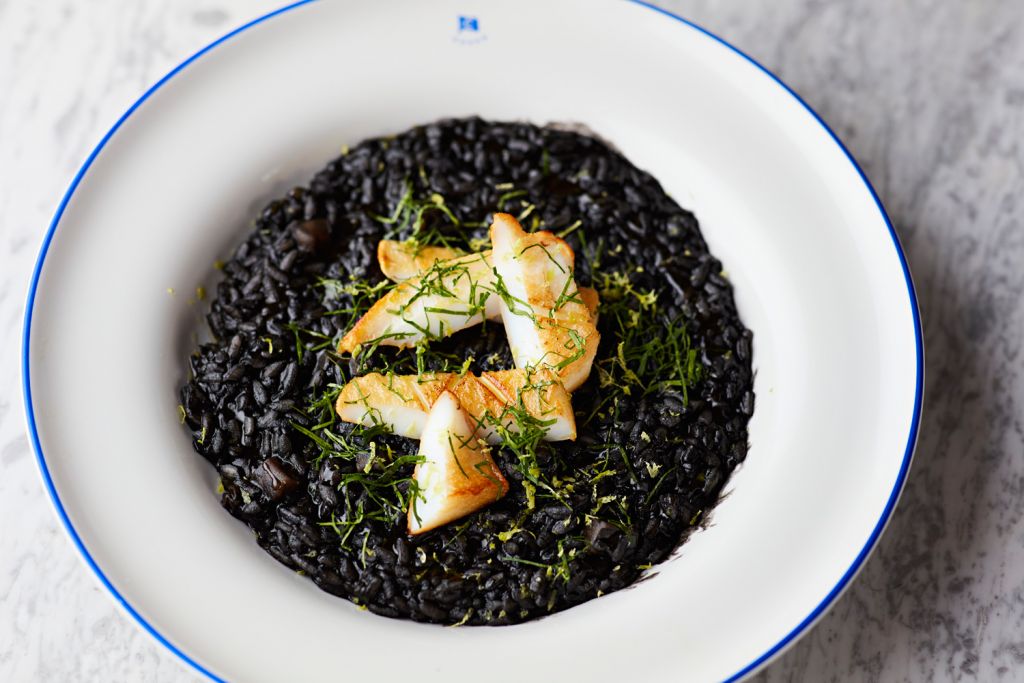 From the “Mains” section, which lists the likes of monkfish and the Chucs burger, my wife opted for the Cotswold lamb served with black olives and flavoursome cocoa blanc beans (£25). It was presented with a very pink and tender centre and was garnished with chard and a light gravy. There are various sides listed on the menu at Chucs, and we opted for some fries and a winter salad dressed with a pleasant Sherry vinaigrette (both priced at £5).

The tiramisu (£7.50) is legendary at Chucs, so it was an easy decision to make by the time I got to the last course. This meant of course that I had to forgo the opportunity of trying the Tarte Tatin or the cheeseboard. Arriving with the Chucs flag logo etched into the icing sugar on the top of the dessert, it was absolutely delicious and was probably my favourite dish of the night. Accompanied by a pot of fresh mint tea, my wife opted for the more palate-cleansing (and the relatively more healthy) lemon and raspberry sorbet (£5), a nice end to what was a superb meal.

In summary…
Chucs Belgravia is the perfect destination for an evening out as a couple, a celebration, or even for just a catch-up with friends in a sophisticated, but laid-back setting. This is a hidden culinary gem that shouldn’t be overlooked when looking to dine in Central London.

Chucs Belgravia – Where and How?

Chucs Belgravia is located at 25 Eccleston St, Belgravia, London SW1W 9NP. For more information, or to make a reservation, call 020 3827 3000 or visit www.chucsrestaurants.com.
See more pictures from our visit to Chucs Belgravia on the Luxurious Magazine Instagram page.