Governments worldwide want more people to embrace cycling to help reduce pollution, and this is something we’re all in favour of here. To make commuting more eco-friendly bicycle manufacturers are adopting electric battery power. But is it possible for a bike to tick ‘All’ the green boxes? Coco-Matbike believes so.

My husband Paul was an early adopter of electric bicycles, but to be honest, he doesn’t use his and instead has loaned it to a local politician who is as keen as he is to help protect the environment. Paul and I still drive a combustion-powered car, but wherever possible, we use our legs to get to where we need to.

It is our view we can do more by writing about ways to help the planet via the magazine instead of taking one more low-emission combustion-powered car off the road. Recently we were introduced to a new generation of sustainable bikes from a company with the unique name of Coco-Matbike.

It doesn’t take the intelligence of a rocket scientist to realise that we all need to do our bit to help save the planet, its wildlife and its diminishing resources. Every day, the news broadcasters inform us of adverse and strange weather, and governments are frantically trying to find the best way to try to reduce and reverse it.

‘IF’, the scientists, researchers, academics and government’s are correct, and we don’t doubt they are; (however, some of what we are told is fact tends to be disproved a decade or two later), the use of fossil fuels needs to go. I believe that it is better to err on the side of caution and make practical changes now, just in case. 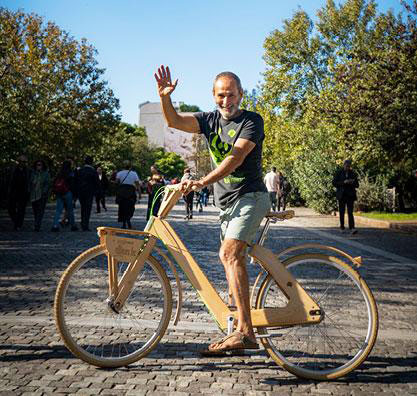 Coco-Matbike was founded in 2016 in Athens, Greece and is the brainchild of Paul Evmorfidis (right).

While cycling in the Alps, Paul’s bicycle broke, and it prompted him to think of creating a better and more robust solution. Paul spent many hours researching and testing materials and designs until he created an eco-friendly bike that he was sure could withstand the test of time, and thus, Coco-Matbike was born.

There’s something that separates Paul’s bikes from many others in the market, and you’ve no doubt spotted this from the images. The Coco-Matbikes are made using wood!

All of the bikes in the range are handcrafted using sustainable wood, which is sourced from certified renewable forests.

The wood to make the bikes is American Ash (Fraxinus Americana), and each adult tree contains enough wood to make around fifty bikes. Paul believes that it’s not just about creating a product that is sustainable, the whole process from start to finish needs to be. Therefore Coco-Matbike is entirely carbon positive with zero emissions, and with every bike sold, they will plant a tree with an individually named tag on behalf of the new owner, so in a hundred or so years, people will know who it was who helped to make a difference.

About the Bikes
Coco-Matbike’s range extends from children’s bikes to adults and is ideal for a daily commute or some fun in the countryside in the fresh air.

The bikes have been ergonomically designed and are compact with firm frames and premium parts to make cycling across all road surfaces effortlessly. Another nice touch is the bikes can be inscribed with the owners’ name, which would make it an ideal gift.

The core range consists of 28″ bikes for men, called Odysseus (above), and the women’s range is called Penelope (e-bike shown below). 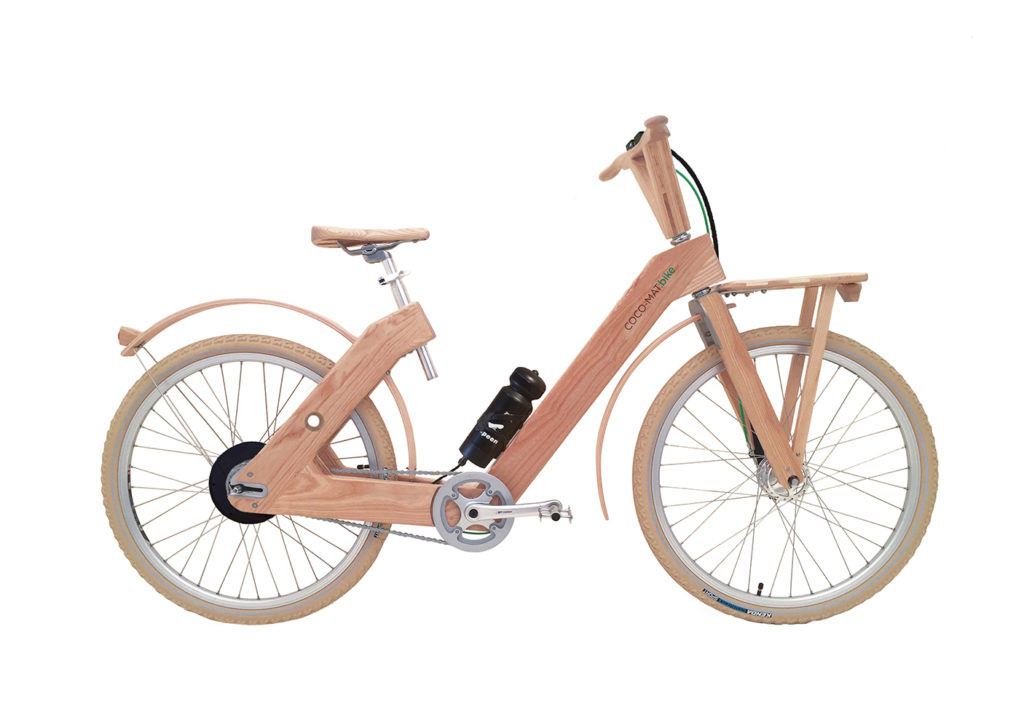 Both are available in two and seven-speed versions. These two ranges are also available as e-bikes, and these have been designed to keep you focused as you still need to pedal in e-bike mode. 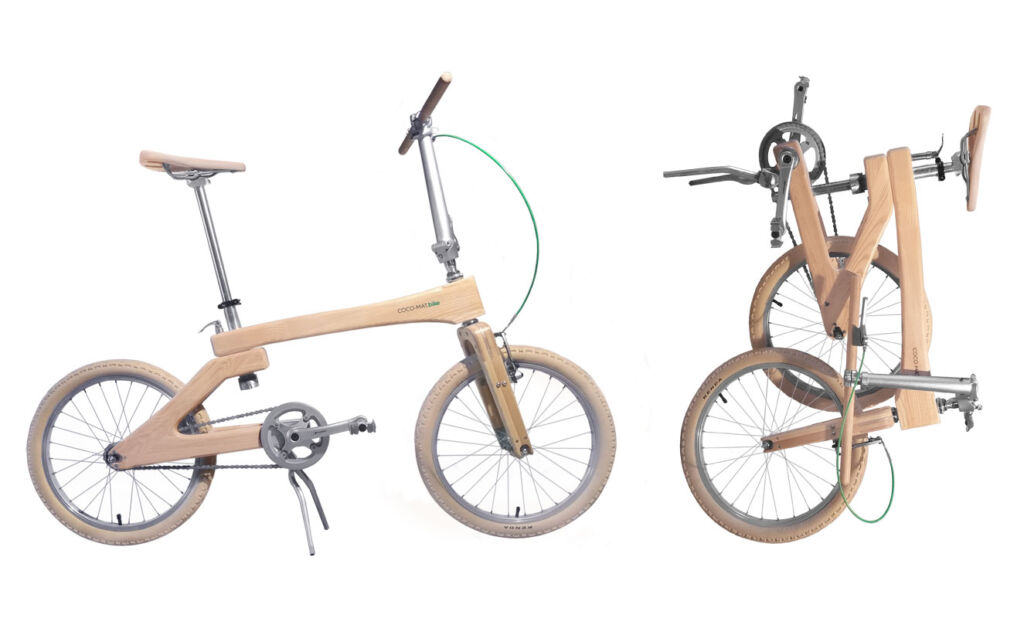 In addition to Odysseus and Penelope, Coco-Matbike also offers foldable bikes, which would be ideal for commuters. These are called Mentor (above) and come with two speeds and seven speeds. Rounding out the range are the children’s bikes which are suitable for ages seven upwards. They consist of the 12″ Argos balance bike, the 16″ Telegonus and the 20″ Telemachus.

A design that extends further than sublime looks 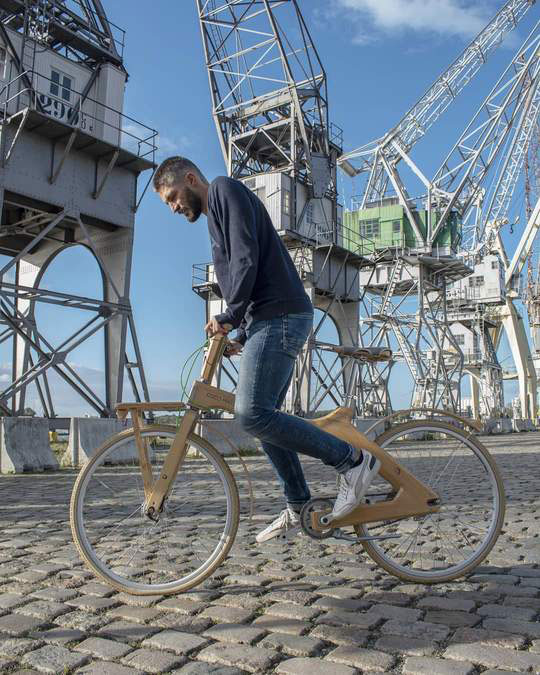 The Coco-Matbikes require assembly, and this includes attaching pedals, handlebars, brakes and the adjustable saddle.

Don’t worry, as it is a very straightforward process and takes under ten minutes to do. There is a how-to video you can watch here.

The bikes, when assembled, are surprisingly light, with the Coco-Mat e-bike weighing 23kg which is the same as most other standard bikes of its type in the market and the folding bike coming in at an extremely portable 14 kg.

When Paul Evmorfidis designed his bikes, he did so with the view that he wanted them to be minimalist in design and operation, with automatic gears and drum brakes which ensures almost a lifetime operation without maintenance.

The bikes wooden frame has a lifetime guarantee in the event of severe damage, and wooden spare parts are available. To help maintain the bike, each one comes with all the Allen keys you’ll need along with beeswax and sandpaper to help maintain the wood.

How much do the Coco-Matbikes cost?

Coco-Matbike UK is part of a network of more than 100 Coco-Mat stores around the world. The parent company Coco-Mat was established in 1989 and is a leading manufacturer of handcrafted products for the home which are made using natural materials.

For more information on Coco-Matbike, details on the individual models, and to place an order, please visit www.coco-matbike.uk.