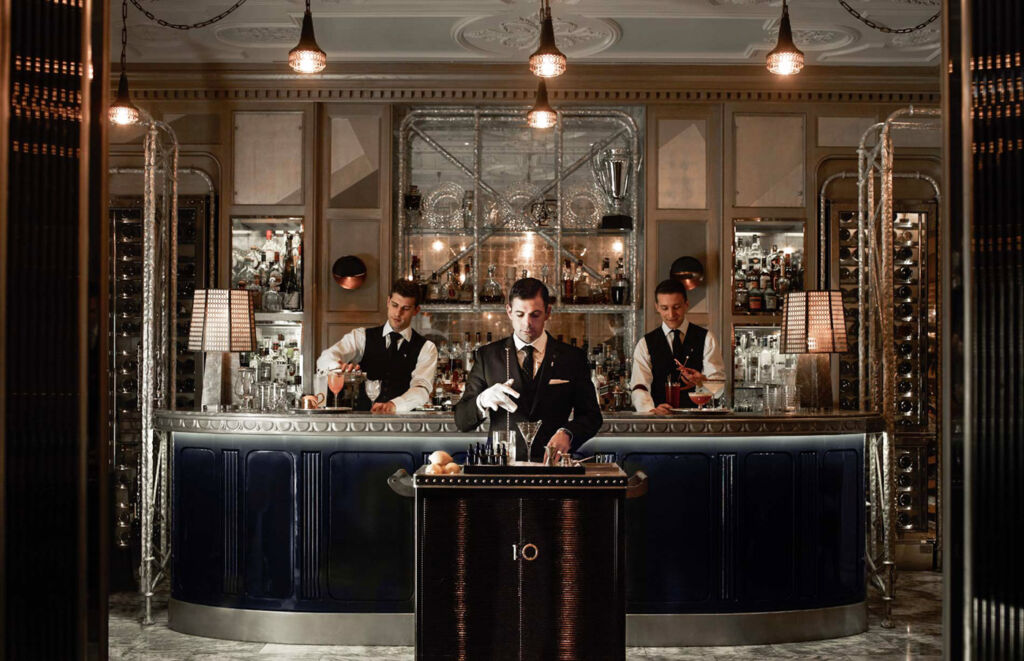 To mark 11 years of the legendary Connaught Bar in Mayfair, Agostino Perrone, Director of Mixology and his right hand man Giorgio Bargiani, Head Mixologist, reveal a new menu of innovative cocktails all inspired by the famous bar itself – the structure, the David Collins Studio design, the signature martini and, of course, the guests.

‘The Vanguard’ – meaning a person or group who lead in new ideas and advanced research – nods to the conception of this new menu, which was worked on by the entire bar team.

In order to create a collection of drinks instantly recognisable as being borne from The Connaught Bar, the team have created three chapters of cocktails each paying homage to different elements of the space – Enigma which nods to their iconic martini, Strata which was motivated by the bar itself and Verve for the two hand-hammered iron gates that stand either side of it. The chapters follow a consistent pattern of five different drinks, ordered from strongest to lightest, including a champagne cocktail and a mocktail in each.

The five Enigma concoctions are the most conceptual of all the drinks, with an unarguable hero among them – the ‘Number 11’. Whilst the bar’s iconic martini never changes, it does offer all choices; made on The Connaught Bar martini trolley it offers vodka or gin, and a choice of five aromatic bitters according to the guests’ preferences.

The ‘Number 11’ sees all of these choices combined in one show-stopping cocktail – the bar’s own gin which is created and bottled in house, vodka, Amalfi lemon oil, wine distillate and all five bitters (cardamom, tonka, ginseng and bergamot, lavender and coriander seeds).

To nod to the bar’s legendary martini pour – which is a dramatically high movement in order to aerate the mixture – this cocktail is dispensed, in front of the guest, from an ingenious machine which does the same job but with immense power. This forceful aeration is the equivalent of pouring from an eleven storey building, and this air allows the flavours of the drink to open up and provide different experiences on the palate.

This cocktail is served with a hand-cut half diamond rock of ice, in a stunning coup. Each coup has been hand-painted by the bar team with five colours to represent the five bitters used. This painterly effect and the name of the drink are inspired by Jackson Pollock who used to number his masterpieces.

From the Strata list, comes the ‘Amberblack’ which is designed to depict the many pairings within the bar such as the contrasting light and dark colours in the interiors. Tropical coconut is harmoniously juxtaposed with coffee, whilst floral notes of jasmine are offset with aniseed notes of Mastiha. The amber cocktail delivers layer upon layer of scents and flavours, all served with one hand cut ice rock in a wine glass partially covered in coconut milk powder and active charcoal.

Fizz and Cheese Pairings that are Perfect for Celebrating New Year

With Purity Distillery’s Gins and Vodkas, The Secret is in the Number