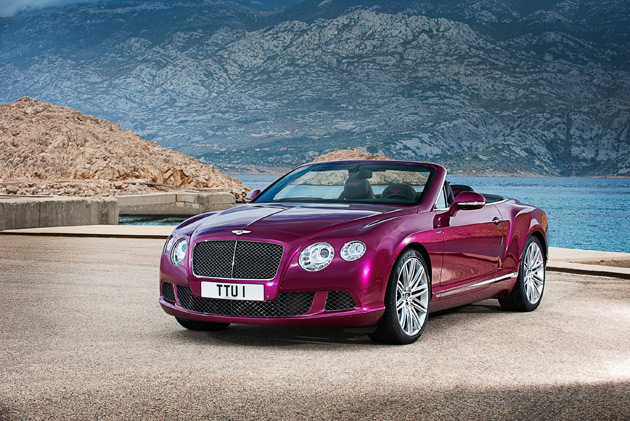 The new Bentley GT Speed Convertible will be making its international debut on 14th January at the North American International Auto Show, Detroit.

Taking its place at the pinnacle of the Bentley Continental range, the new GT Speed Convertible has a top speed of 202 mph (325 km/h) and in true Bentley style, no compromises have been made in craftsmanship, luxury or refinement to deliver this unrivalled performance. 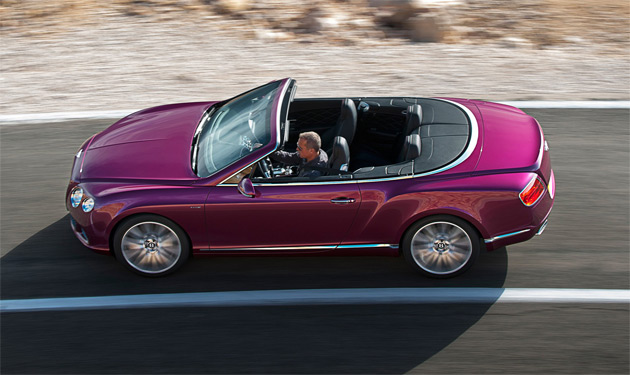 Commenting on the new Continental GT Speed Convertible, Bentley Chairman and Chief Executive Dr Wolfgang Schreiber said:  “Following the recent successful introduction of the GT Speed, the new GT Speed Convertible will appeal to drivers who seek the sensory thrills of the world’s fastest four-seat soft-top and the practicality of a year-round grand tourer, together with unrivalled levels of luxury and refinement. It is designed for those who accept no compromise.”

The latest ME17 engine management system, capable of performing 180 million individual calculations per second, provides enhanced turbocharger control and torque management, enhancing driveability. In common with all W12-engined models, the GT Speed convertible features an energy recuperation system. Together with a close-ratio, quick-shifting eight-speed transmission, this has resulted in a 15 per cent improvement in fuel economy and CO2 emissions compared with the first generation Speed, with a commensurate increase in tank range.

The new GT Speed Convertible’s powertrain is even more tractable than its Speed predecessor, and just as fuel-efficient as the new W12 Continental GT. Switching the gear selector to ‘Sport’ mode however demonstrates the dual personality of the new GT Speed convertible, delivering a sharper throttle response, gear-shifting at higher engine speeds and faster ‘block shifting’ (eg 8th direct to 4th gear) for instantly accessible acceleration. The enhanced performance is accentuated by a glorious baritone snarl from the free-breathing exhaust, a thrilling soundtrack to the magnificent powerhouse under the bonnet. 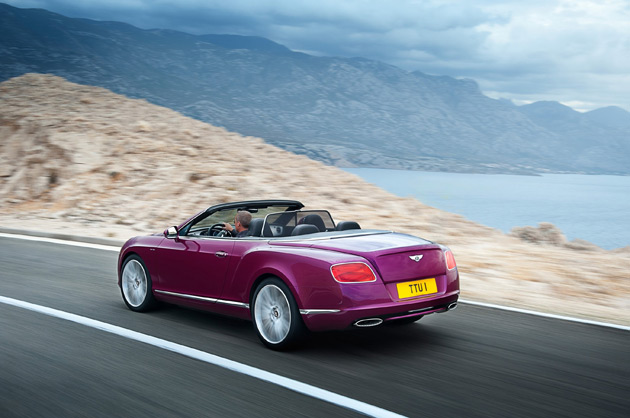 The self-levelling system is set 10 mm lower than the 575PS Continental GT convertible. Stiffer suspension bushes ensure sharp, communicative handling, while uprated anti-roll bars optimise the handling balance. The result is improved body control under hard cornering together with greater agility and, because steering plays an essential role in feeding response and grip back to the driver, the Servotronic steering has also been recalibrated for the Speed specification.

The Electronic Stability Control (ESC) system is optimised for the new engine management system to deliver both outstanding safety and greater driver involvement. The ESC system retains the “Dynamic Mode” setting that allows increased wheel slip at higher speeds, with engine torque reinstated more quickly after a system intervention. Together, these systems give the keen driver more opportunity to exploit the full potential of the new chassis set-up and higher power output.

The exterior is like a shap tailored suit
From outside, the Continental GT Speed convertible is distinguished by a matrix radiator grille and bumper air intakes in a dark-tint chrome finish. The 21” Speed alloy wheels are unique to this model, and are available in silver or an optional dark tint. Large, elliptical exhaust tailpipes feature a rifled interior, while a further, subtle design touch is revealed when the bonnet is opened – the black inlet manifold is unique to the Continental Speed models. As with the GT Speed coupé, the winged ‘B’ badge which crowns the radiator shell is set upon a black enamel background.

The front wings of the GT Speed Convertible are created in superformed aluminium, their seamless form and crisply-defined body creases creating an impression of tension and muscularity. The 10 mm lower suspension and unique 21” wheels accentuate the wide, low and poised stance. Despite the supercar performance, additional spoilers are unnecessary – the gentle lip on the double-horseshoe bootlid generates all the downforce the GT Speed Convertible needs, even at over 200 mph (325 km/h). 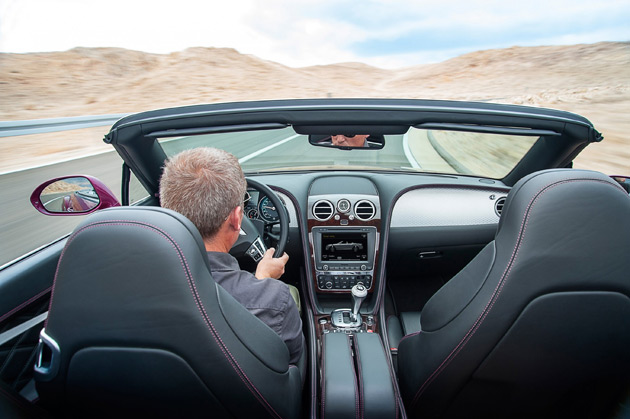 As expected. luxurious and fully loaded
Inside, exclusive treadplates featuring the ‘Speed’ legend welcome you to a four-seat cabin that features the hand-craftsmanship of the Mulliner Driving Specification, with its distinctive diamond-quilted hide upholstery. For the Continental GT Speed models Bentley offers an exclusive Dark Tint Aluminium ‘engine spin’ finish, inspired by the dashboards of the Le Mans winning Bentleys of the 1920s. Its understated shade is the perfect complement to the exterior’s dark tint chrome radiator and bumper grilles. Other optional finishes include the full range of fine wood veneers and a satin-finish Carbon Fibre option for fascia and centre console.

The infotainment system features Bentley’s latest software upgrades, which vary from region to region but include refinements such as point of interest mapping, optional satellite landscape imagery, live traffic data and, where the infrastructure supports it, digital radio. The system features 15 Gigabytes of available music space, as well as the facility to play music via an iPod, MP3 player, the car’s own six-disc CD changer or SD card.

Flat panel Balanced Mode Radiator (BMR) speakers, which combine the functions of separate tweeter and midrange speakers in one unit, direct the sound with accuracy and provide greater clarity across the audible spectrum. Alternatively, the audiophile Naim for Bentley system, incorporating custom-built speakers and eight individual Digital Sound Processing modes, is available as an option. As a thoughtful touch, the audio balance settings automatically alter when the roof is lowered to compensate for the change in listening environment.

Open top thrills at the touch of a button
The new Continental GT Speed Convertible offers the luxury and refinement of a coupé yet transforms into a head-turning open tourer at the touch of a button. The four-layer hood ensures high levels of refinement and acoustic insulation. Exhaustively tested in all conditions from -30°C to +50°C or more, it resists even monsoon-force rain and maintains comfortable, draft-free warmth even on the coldest days.

Another practical feature, the neck warmer, makes open air driving an appealing and comfortable prospect even on the cooler days of spring and autumn. With the hood down, the Continental GT Speed convertible offers sensational performance with the sensory amplification of open-air motoring. Hood up, it’s as practical a year-round proposition as its coupé stablemate.

As with every Bentley Continental model, the GT Speed convertible offers the reassuring stability of permanent all-wheel drive, biased 60:40 in favour of the rear so the spirited driver can control the car’s line with the throttle. The rear-biased torque split also minimises understeer during hard cornering while the system varies torque between the front and rear axles for optimum grip in all road and weather conditions.

The result is an exhilarating combination of performance and practicality; a Bentley that can tackle sun-drenched boulevard or snowy alpine pass with equal aplomb.

The new Bentley Continental GT Speed Convertible will debut on 14th January at the NAIA Show.